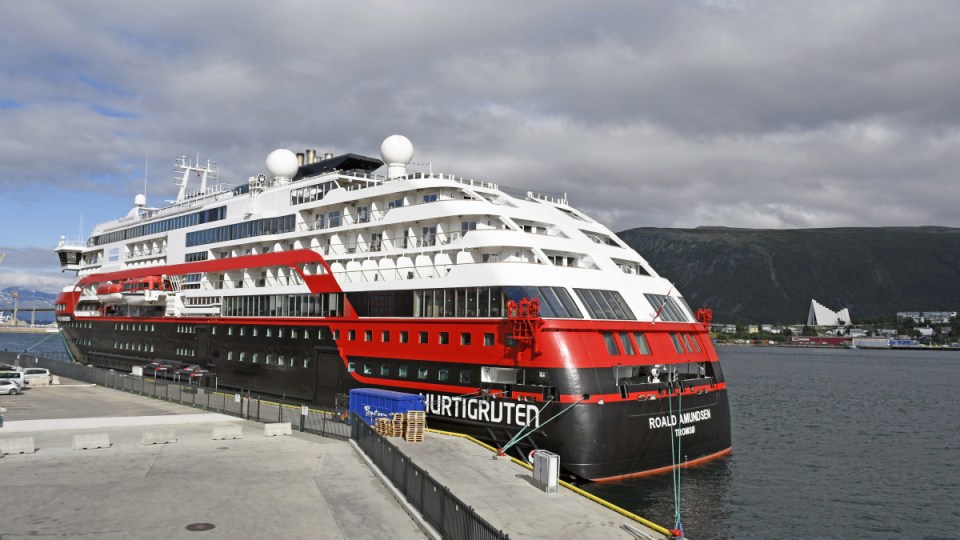 At least 33 crew have tested positive to coronavirus on board expedition ship MS Roald Amundsen docked at Tromso in Norway on Sunday. Photo: AAP

At least 40 passengers and crew from a luxury Norwegian cruise liner have tested positive for COVID-19.

Authorities are still trying to trace a number of passengers from two recent Arctic voyages, public health officials in Norway said on Sunday.

Four crew members on the MS Roald Amundsen were hospitalised on Friday when the ship arrived at the port of Tromsoe, and later diagnosed with the respiratory illness.

Tests showed another 32 of the 158 staff were also infected.

While the crew was quarantined on the ship, the 178 passengers who arrived on Friday were allowed to disembark before anyone had been diagnosed, triggering a complex operation to locate them in order to contain any potential spread.

So far, four of the combined 387 passengers travelling on the ship on two separate cruises since July 17 have been found to carry the virus, the Norwegian Institute of Public Health (FHI) and the Tromsoe municipality said.

“We expect that more infections will be found in connection to this outbreak,” said Line Vold, a senior FHI executive, adding that the passengers have been told so self-isolate.

The Hurtigruten line, owner of the MS Roald Amundsen as well as 15 other vessels, in mid-June became the first to return an oceangoing cruise ship to service following a three-month halt due to the pandemic.

Asked later on Sunday whether the authorities had by now located and tested everyone potentially infected aboard the cruise liner, an FHI spokesman said: “Messages have been sent to all the passengers. We’re now seeking to verify that the information has been received and understood.”

Among the infected crew, 32 were from the Philippines while the rest were of Norwegian, French and German nationality, operator Hurtigruten said.

“We are working hard to contain this outbreak in order to limit the spread in the general population,” Tromsoe municipality chief doctor Kathrine Kristoffersen told a news conference.

At the start of coronavirus outbreak in early 2020, thousands of passengers became stranded on cruise vessels in the waters of Asia, the United States and elsewhere, leading operators to cancel journeys and triggering mass layoffs.

With measures such as reduced passenger capacity, social distancing and strict rules on hygiene, Hurtigruten aimed to persuade customers to return to the cruise industry.

The MS Roald Amundsen is scheduled to sail around the British Isles in September, docking at ports in England and Scotland.

Forty infected with COVID-19 on cruises