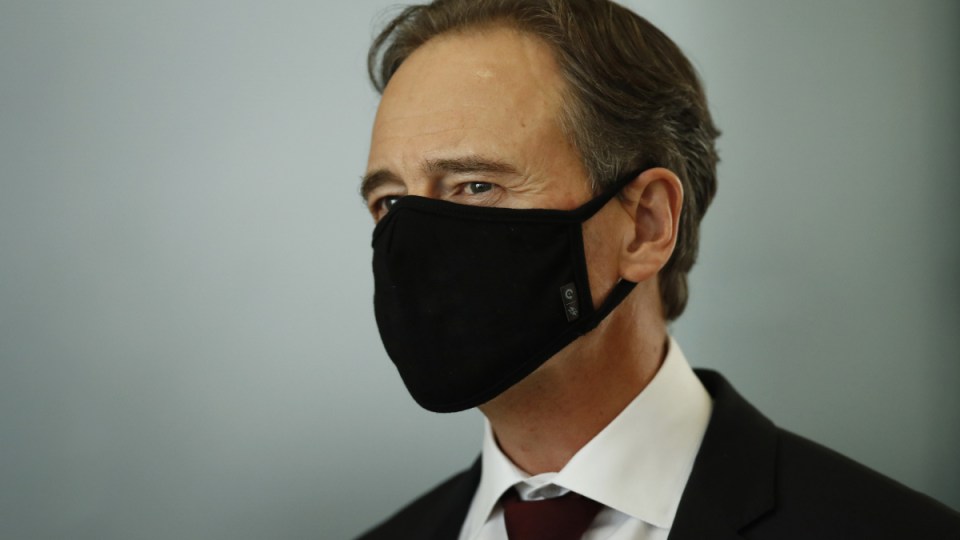 Federal and state authorities set a fresh conciliatory tone and harmonious front just 24 hours after it appeared cracks were beginning to emerge in a previously united response.

But the public show of unity is unlikely to solve Victoria’s aged-care crisis, with warnings of more deaths and “worse to come”.

At least 440 residents in Victoria’s aged-care system have been diagnosed COVID-positive, federal Health Minister Greg Hunt said, while dozens of homes have outbreaks.

Victorian authorities are shipping vulnerable residents of virus-hit homes into hospital care. They are desperate to avoid a repeat of the outbreak at St Basil’s Homes for the Aged in Melbourne’s north, where 11 people are died and nearly 100 are ill.

“This is a difficult day. There are more difficult days to come and we need to be honest about that,” Mr Hunt said Wednesday.

Federal and state health departments have come under intense scrutiny about how the situation was allowed to deteriorate so badly. Previous outbreaks in aged-care homes in Victoria and NSW – including the now-notorious Newmarch House – exposed some of the same vulnerabilities and weak points being blamed for the current crisis.

The former chief medical officer and now health department secretary, Professor Brendan Murphy, warned there would be “deaths every day” as Victoria’s crisis continued, after “deficiencies” in the response.

Standing alongside Prime Minister Scott Morrison on Wednesday, he said a report into Newmarch House was still being produced, but that authorities had learned lessons about communicating with families and infection control – despite those being two of the biggest criticisms of the response to St Basil’s.

“I think aged care around the country has been immensely prepared,” said Mr Hunt, when asked about the crisis engulfing Victoria’s aged-care sector.

“150,000 aged-care staff have had infection control, we have had PPE available. What we see, though, is of course community transmission leads to the transmission into workplaces or so many other places.”

Mr Hunt called it “one of our extraordinary achievements that outside of Victoria, we have been able to protect and prevent against” large outbreaks in aged-care homes.

“But where there is major infection, then that reaches into all different elements and parts of a community,” he said.

The PM called these “shared responsibilities” with the state government.

It struck a sharp contrast to Tuesday, when Mr Andrews took a veiled swipe at the federal regulation of aged-care homes, and Mr Hunt then took his own not-so-veiled swipe back by accusing the Premier of a “dangerous statement”.

On Wednesday, it was back to the more co-operative state and federal response.

“The reports of these things about how the Premier and I are working together are greatly exaggerated. The Premier and I enjoy a very good working relationship. We enjoy a high level of respect for each other,” the PM said.

Mr Andrews added: “I have a very important, productive, and respectful relationship with the PM … any talk about fights and arguments is wrong.”

But it wasn’t as peachy elsewhere, with Queensland unexpectedly pulling up the drawbridge to anyone living in greater Sydney.

From Saturday, anyone in 34 local government areas across the city will be barred from crossing the border – a move NSW Premier Gladys Berejiklian said she wasn’t aware of until it was announced publicly.

“That’s a matter for the Queensland Premier, but it would have been nice if she told me,” she said.

“If you are in Sydney please take this opportunity to come home to the safety of Queensland,” Dr Young said. pic.twitter.com/rSXqrsYBw6

It came as Queensland recorded its first new COVID cases in months, with two young women – who had recently been in Melbourne – testing positive after allegedly supplying incorrect information to officials when entering from NSW.

A third case, linked to the first two, was also later confirmed.

“I note that the cases they’ve announced today are all from Victoria,” Ms Berejiklian said pointedly, before saying “it hurts the smaller states if you don’t interact with NSW”.

“It is highly likely that the constitutional position that is being reviewed in this case will not fall in the Western Australian government’s favour,” he said.

“I’m concerned about the sort of combative way that this is unfolding in Western Australia and I would like to find a much more productive way forward.”