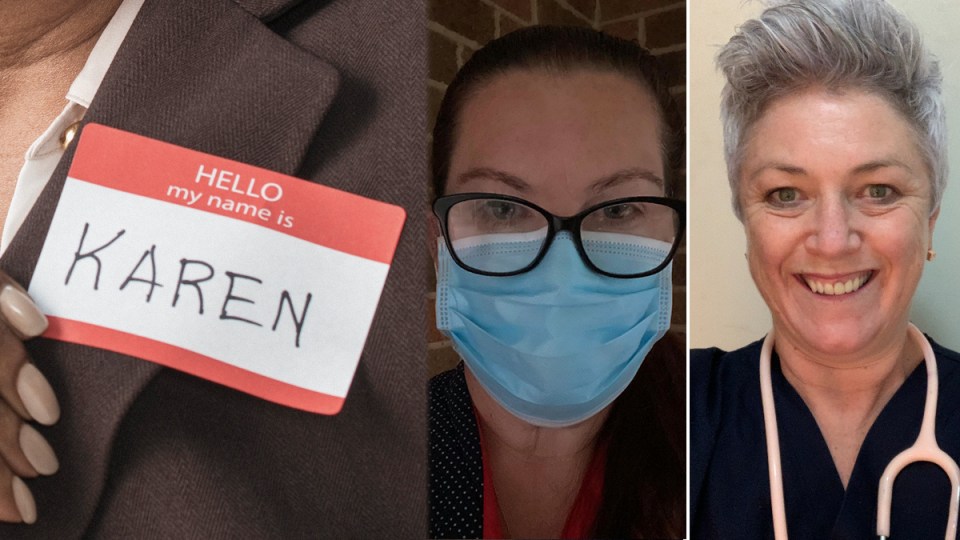 What's in a name? Plenty as Karen Hansch and Karen Yates can attest.

She is too busy trying to cope with the fact she’s lost 15 loved ones since February.

Named after her dad’s aunt, who died two days before she was born, Ms Coon is just one of our nation’s many good ‘Karens’ on the front line of the coronavirus fight – quite the opposite to the women filming themselves deliberately defying health advice.

And she has found herself unfortunately doubly linked to recent social media outrage, with both her first and last name featuring in outrage stories in the past week.

But the Melbourne hospital administrator’s mind is on more important things (like protecting herself, colleagues and patients from COVID-19).

Like most of us, she has been affected in her personal life by the pandemic restrictions, such as being unable to attend funerals of friends and relatives who have died.

Yet Ms Coon said her experience is nothing compared to what others have suddenly lost.

“The poor families of the people in the nursing homes that have died, I worry about them more than someone using the name Karen,” Ms Coon said.

Her empathy is in stark contrast to the personality traits of the character invented by the public.

A phenomenon believed to have originally stemmed from an internet meme, the label ‘Karen’ has been assigned to every rude woman in videos doing the rounds on the internet – from those who tell off wait staff and ask to speak to managers, to women who call the police on innocent African Americans.

Female Australian teachers have recalled how they are now being called the name when telling off unruly students (the kids’ retort accompanied by an eye roll as if how dare the woman pull them into line).

Now, it’s being attached to ignorant anti-maskers rebelling against a mask mandate meant to save lives.

Some of the real (good) Karens of Australia have had enough.

Others are joining in on the laugh.

“This is getting out of control. I don’t want to be associated with people like that,” said Karen Yates, who trains graduate nurses in their first year out of university.

The sense of stigma has caused Ms Yates to become self-conscious of what people may think of her.

“I’m a very caring, generous, friendly person. I do have some traits that may be attributed to the ‘Karen’ that people refer to,” Ms Yates said.

Nurse Karen Hansch said she is constantly tagged in Karen memes but it doesn’t bother her – in fact, she welcomes the distraction.

“Having a sense of humour during this pandemic has served me well and I am in many ‘Karen meme’ Facebook pages and love watching the videos … It brightens up my day,” Ms Hansch said.

“If using the name Karen is the way people choose to have a laugh at the moment I’m more than happy for them to continue to do so.”

Kay Cook, associate professor in the Department of Social Sciences at Swinburne University, said the constant labelling of entitled white women as ‘Karen’ has caused a stigma of selfish ignorance to attach itself to the name.

Dr Cook said women by that name are caught in a bind.

“There is no way for them to remove this stigma, as demanding to have their name cleared – or to use a different name (or) term to call out bad behaviour – is the behaviour of a ‘Karen’,” she said.

“There is no way for such women to win here – as this term is quick, cultural shorthand that justifies women being dismissed.”

Adamm Ferrier, a lecturer at Latrobe University with an abiding interest in gender issues, said calling someone a ‘Karen’ is “schoolyard bullying at the very least”.

“It makes me feel very uncomfortable to have a meme developed like this, however innocently, that could have the impact on making a person reluctant to speak out,” Dr Ferrier said.

“For the individual that might not have the emotional resilience to cope with it, it can become unbearable.”

‘Call them Karen’, say the good Karens, but don’t label us all