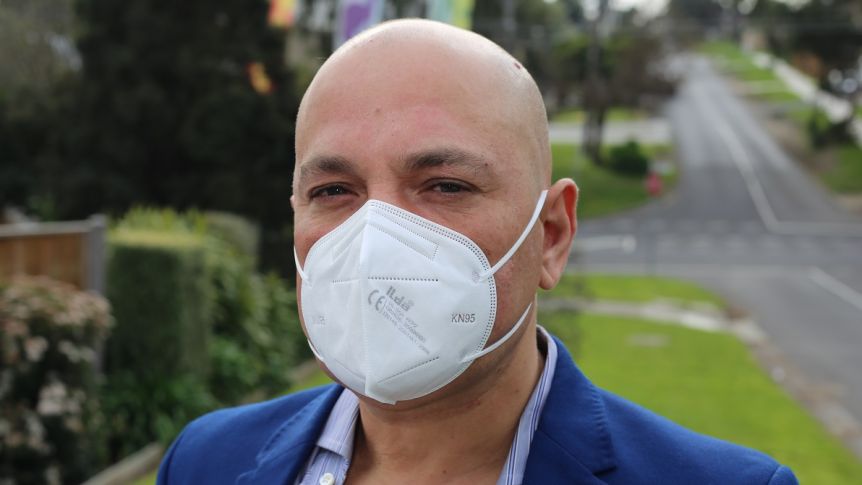 John Atzarakis has been told by doctors that his mother will not survive her fight against COVID-19. Photo: ABC News

Families of residents of a Melbourne nursing home that has been linked to 74 coronavirus cases have expressed anger and fear about the handling of the outbreak in the facility.

John Atzarakis was told on Tuesday his mother, 77-year-old Fotini Atzarakis, would not survive the coronavirus infection she picked up at St Basil’s Homes for the Aged in Fawkner, in Melbourne’s north.

Despite the predictions of doctors at the Austin Hospital where she is being treated with maximum oxygen, Mr Atzarakis’s mother has so far defied the odds.

He attributes that to her determined spirit, which has already seen her survive 14 years of Parkinson’s disease.

“I just, I wish she would have had the opportunity to live a few more years and be with us,” he said.

“But it’s just not going to be the case because of this.”

One more coronavirus infection was linked to St Basil’s on Saturday, bringing the total number of cases linked to the home to 74.

It is the largest of Victoria’s aged care outbreaks, which account for 536 of the state’s almost 4000 active cases.

It was nearly one month ago that Mr Atzarakis’s family made the decision to check his mother into St Basil’s for a spell of respite care.

But as the latest surge of infections in Melbourne escalated, Mr Atzarakis said his family saw worrying signs, including an absence of mask wearing among staff inside the Fawkner home.

Once the outbreak took hold, he said the home was slow to update families and staff told his sister they were waiting for advice from the health department before running full tests on every staff member and resident.

He believes a lack of leadership from the managers at St Basil’s contributed to the outbreak that is almost certain to claim the life of his mother.

“It’s killing the whole family. We’re all suffering because of something that could have been prevented and has happened in our eyes because people did not take ownership,” he said.

Mr Atzarakis also urged the general community to grasp the seriousness of the pandemic.

“Just look after yourself and your family. Don’t go anywhere if you don’t have to,” he said.

“People have to prioritise their health first. Your hip pocket means nothing if you’re not going to be alive to enjoy it.”

In a statement to families posted online, St Basil’s chairman Konstantin Kontis said the aged-care home’s staff were “extremely distressed at the loss of our loved residents” and was sharing in the grief of those who had lost a friend or relative.

He also said personal protective equipment (PPE) became compulsory for all staff, on every shift from July 13, the same day federal health advice changed to make mask use in aged care homes mandatory.

“We have camera vision to prove our contention for all shifts since that date.”

Mr Kontis said all staff from St Basil’s had been placed into quarantine and had been forced to leave at 9am on Wednesday to hand over to a completely new team appointed by health authorities.

He acknowledged a “gap” in communication with families as staff were removed from the home on Wednesday, but said he understood all relatives’ families had since been back in regular contact.

However, he said that since St Basil’s staff were sent home and a new team brought in, there had been “very limited” information provided back to the original team, hampering their ability to keep families up to date on the situation.

Mr Kontis said he was working with the Department of Health to bring videoconferencing between families and residents back online.

Pathology worker “Julie”, who did not want her real name used, was hired as a contractor last week to begin testing residents at aged care homes across Melbourne.

She was at St Basil’s on Thursday, after the staffing swap had occurred, and said the environment was confusing and chaotic.

“St Basil’s was probably the worst place I’ve been to,” she said.

“We weren’t checked for our temperature or flu shot. The basic protocols weren’t dealt with.”

Julie alleged there had been no separation of residents who had tested positive or negative while she was there, and she saw some workers reusing masks and contaminating clean PPE with used masks.

She said testing at the home could not be finished on Thursday because identifying patients was almost impossible due to language barriers and a lack of information provided by management.

“We had no idea who they were. We can’t send off random samples of people,” she said.

“Staff didn’t know who was meant to be in which bed.”

Julie fears nothing has been learnt after the outbreak at aged-care home Newmarch House in Sydney, which cost 19 lives.

It is understood after all permanent staff at the home were stood down, they were replaced by staff from Aspen Medical, the company that was brought in to provide emergency medical care at Newmarch House.

In a statement, federal Aged Care Minister Richard Colbeck said Aspen Medical staff were working at St Basil’s “helping to ensure strict adherence to infection prevention and control protocols, including the use of PPE, hand hygiene and cleaning”.

“Arrangements are in place for orientation and induction of all staff at the beginning of each shift in infection control protocol and PPE use, to ensure there is no ongoing transmission,” the statement said.

Senator Colbeck said clinicians and personal care workers at the home were being supported by specialist staff provided by the Victorian Department of Health and Human Services (DHHS), and if further medical or nursing care was needed the Commonwealth would work with DHHS to ensure it was provided without delay.

Senator Colbeck said both the Commonwealth and Victorian governments were taking all possible steps to ensure that families of residents were kept up to date about the situation at the home and in relation to their loved one.

Christine Golding’s 84-year-old mother Efraxia is still inside the home.

Ms Golding has not talked to her mother since Monday and is becoming increasingly concerned about her welfare.

“My mother needs stimulation, she needs human contact. She has dietary needs and she’s just being fed and watered,” she said.

After almost a week of calling the home, Ms Golding was told on Saturday morning her mother had tested negative to the virus, but she was told nothing else about her condition.

“It’s absolutely difficult, I just rang and thought they would be proactive but it’s just crickets,” she said.

“We are dying to get in there. I’m very stressed and really concerned.”

Ms Golding said she was told all information about residents would be relayed to her via a social worker in Adelaide and a video call with her mother would be available on Monday.

The social worker told Ms Golding and her husband that she had a virtual meeting with management from the home every day at 8:30am, but had not been able to get answers to her questions.

“How are our parents? Have they been tested? They all have different dietary requirements. Are they in bed? Are they taking their medication? She said she has no answers,” Ms Golding said.