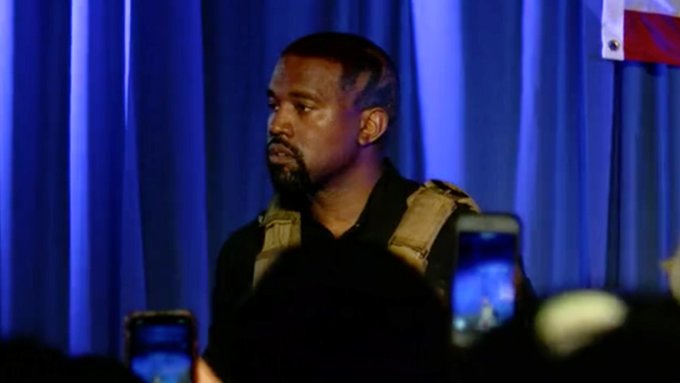 Kanye West broke down in tears, made an outrageous claim about slave liberator Harriet Tubman, had a heckler ejected and claimed his brain was too big for his skull at the first campaign event for his bewildering presidential run.

“Harriet Tubman never actually freed the slaves, she just had them work for other white people,” he said at one point, in a rambling speech that bounded from one topic to another with little seeming structure.

At another moment, he broke down when sharing that he and wife Kim Kardashian West had considered an abortion, and then said his own father wanted to have him aborted.

“There would have been no Kanye West … because my dad was too busy!,” West sobbed.

Apparently wearing a bulletproof vest, West sounded off on multiple other topics, ranging from social media to religion to his Adidas deal, during the rambling speech at the Exquis Event Centre in Charleston, South Carolina.

The reaction of the crowd – “registered guests only” – ranges from sympathy to disgust at various points.

After West’s comments about Ms Tubman, who is credited with freeing hundreds of slaves via the “Underground Railroad,” one crowd member groaned, “Come on, man,” while a woman can be heard saying, “Okay we’re leaving now.”

West then segued immediately into saying that the National Basketball Association and Universal Music Group have no black owners.

West demanded “absolute silence and absolute order” – and even asked audience members to point out anyone they heard talking – scolded the crowd for clapping at one point, and had another audience member ejected for an unclear reason.

Judging by the reactions on social media, the appearance has escalated concerns about West’s mental health.

He has frequently said that he is bipolar and often disdains medication. He was hospitalised for stress and exhaustion and reportedly placed on psychiatric hold after several onstage rants during a tour in late 2016.

Announced earlier in the day and held in a small room before what appeared to be a couple of hundred people, all attendees were asked to sign a COVID-19 liability release form, social distance and wear a mask.

West announced on Twitter, seemingly in earnest, that he’d be running for president exactly two weeks ago on Fourth of July.

He also tweeted on Saturday asking his followers to sign a petition to get him on the South Carolina ballot.

West was able to get on the ballot in Oklahoma this week by paying a $US35,000 ($50,000) fee before the cut-off deadline in lieu of getting petition signatures.

The deadlines to register as a write-in candidate have passed in several states, but many extend into August and September, leaving a small chance that West could muster enough petition signatures to get him on the ballots in those states.

After several reports about the long-shot candidate dropping out circulated last week, many fans were surprised to see West commit to running.

According to Politico, he has not registered in any major voting poll.