Australians are increasingly butting out the cigarettes and putting down the bottle but more are turning to party drugs.

There was a fall in recreational use of painkillers and opioids, but party drugs, including cocaine and MDMA, have grown increasingly popular.

Meanwhile, the number of Australian smokers has fallen to just 11 per cent, the National Drug Strategy Household Survey has found.

“Smoking rates have more than halved since 1991 when almost one quarter (24 per cent) of Australians were daily smokers,” Australian Institute of Health and Welfare spokesperson Dr Gabrielle Phillips said.

While conventional smoking had decreased, the use of e-cigarettes is on the upswing according to the survey of more than 22,000 people.

Senior research fellow at the University of Melbourne Michelle Jongenelis said the increase was ‘‘worrying’’.

“Furthermore, 65 per cent of adolescents and 39 per cent of young adults report using e-cigarettes despite having never smoked. 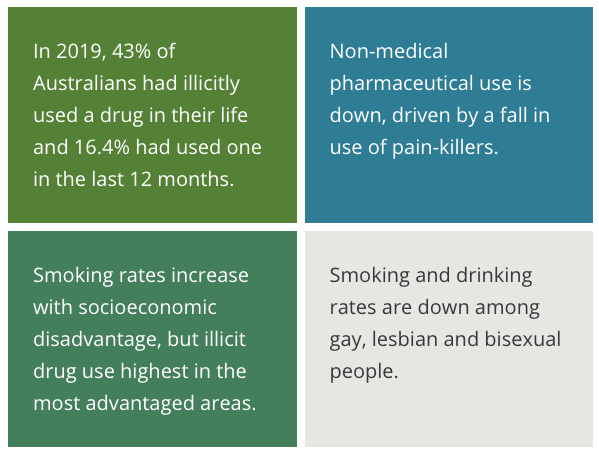 “These concerning proportions are likely being driven by the vaping industry’s narrative that e-cigarettes are ‘harmless’.”

While Australians are drinking less, most still love a drop, with about a third reporting they had consumed alcohol in the previous 12 months.

The proportion drinking at risky levels on a single occasion at least monthly (25 per cent) or at levels that put them at risk of harm over their lifetime (16.8 per cent) has been stable over the past three years.

“There was also a rise in the number of people cutting back on alcohol, with 31 per cent of people saying they had reduced the number of alcoholic drinks they consumed at any one time, up from 28 per cent in 2016,” Dr Phillips said.

In May, the AIHW collaborated with the Australian National University to study the effect the pandemic was having on our alcohol habits.

While we’re taking fewer prescription medications, we’re also consuming more illicit drugs – with just under half of us trying something illegal.

The reclassification of medications containing codeine in 2018 to make them available only by prescription appears to be largely responsible for a decline in the non-medical use of pharmaceuticals.

“Overall, the use of pharmaceuticals for non-medical purposes in the previous 12 months dropped from 4.8 per cent to 4.2 per cent.

If we break our population down by age, today’s 14 to 29-year-olds are less likely to smoke, drink alcohol or consume illicit drugs than previous generations.

“People aged in their 40s were the most likely to have used an illicit drug in their lifetime (55 per cent in 2019).”

“There has never been such a thing as a drug-free society,” she said.

“We need to face the fact that drugs are not going away and work out how to make them safer.

“It really reinforces why we need to introduce harm-reduction measures like drug checking at festivals.”

Australians get off the smokes, but are increasingly trying party drugs