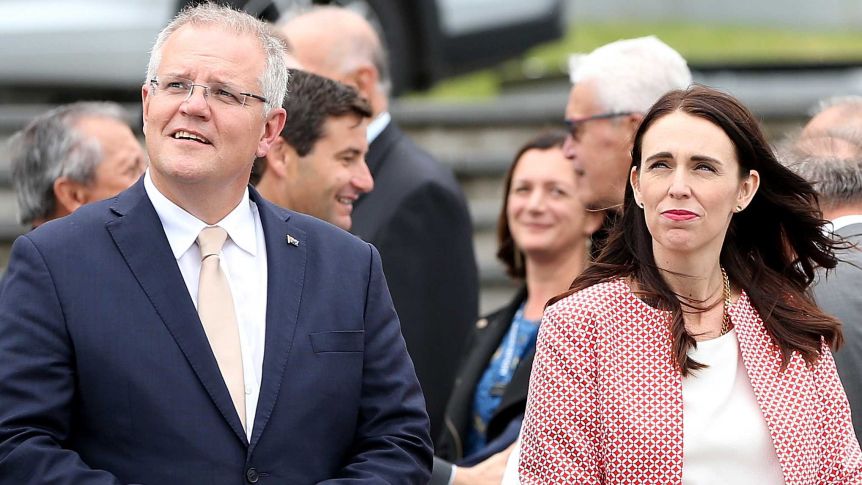 Scott Morrison and Jacinda Ardern have had discussions in recent months over the issue of deporting criminals to New Zealand. Photo: AAP

Up to 30 New Zealand criminals are set to be deported as early as Tuesday after months in coronavirus lockdown.

They will be flown to a secret location for a 14-day quarantine period.

The issue of deportations has been a source of tension between successive prime ministers on both sides of the Tasman, with New Zealand leader Jacinda Ardern publicly taking her counterpart Scott Morrison to task over the practice earlier in 2020.

Ms Ardern said it was “corrosive” to the two countries’ relationship, amid concerns some of the convicted criminals have limited ties to New Zealand and have spent most of their lives in Australia.

“They are, I believe, flying into New Zealand on Tuesday or Wednesday – no dates have been given, just a piece of paper saying to be ready on those dates.

“The men deserve to have some information given to them – what services are going to be provided to them, what is expected of them?”

Iwi in Australia is a group that represents New Zealanders in immigration detention in Australia.

Ms Payne said it had been a difficult time for the people in detention, as coronavirus control measures meant they had been denied all visitors.

Despite many having fought to remain in Australia, she argued some would feel relief at the prospect of some sort of freedom in New Zealand.

The Australian Border Force said it would not discuss upcoming removals.

“Removals of non-citizens have not stopped as a result of COVID-19. However, [they] have significantly slowed since March 2020 due to the availability of commercial flights and the travel restrictions.”

But the New Zealand government has confirmed the deportations will occur.

“These are people who have committed crimes in Australia, they’ve lived in Australia, many of them only have a very minor connection to New Zealand, and our view is that the Australian government shouldn’t be deporting them.

“We’re receiving them because we’re obliged to receive them, but it would be wrong to say we’re happy about it.”

Extra military and extra police would guard the “inner-city hotel” where the deportees would be housed for a 14-day quarantine period when they arrive in New Zealand. Mr Hipkins was not prepared to reveal the exact location.

“I don’t want to see people engaging in some form of vigilante justice here,” Mr Hipkins told RNZ in defence of keeping the location a secret, suggesting community backlash was possible.

New Zealand opposition leader Todd Muller has called on the government to be “up-front” with the public about where the hotel is.

Ms Payne argued the New Zealand government was “complicit” in its secrecy, and could not hide behind its ongoing criticism of Australia for deporting New Zealanders.

“Neither government has had enough respect for its citizens of both countries to be transparent and give us information,” she said.

As the deportations ramp up again, Labor has raised concerns about coronavirus controls in some hotels being used for temporary detention, referred to as “alternative places of detention”, or APODs.

The letter was spurred by a worker at a hotel being used for temporary detention in Melbourne’s north testing positive for coronavirus last week.

“We are deeply concerned for the health of detainees if social distancing cannot be maintained in both detention centres and APODs,” the pair wrote.

“These detainees are in your care, and they deserve – at the very least – to be safe, secure and have their health and welfare guaranteed.

“Similarly, if the government believes detainees are a danger to the community, Australians should have confidence that the integrity of the onshore detention network is not compromised by any mismanagement by you during this pandemic.”

Senator Keneally and Mr Giles urged the federal government to consider community detention for people who did not pose a risk to the public, and called for weekly reporting of COVID cases in detention.

The pair also wanted details on detention centre staff who are not at work because they have potentially been exposed to COVID-19.

On Monday night, the ABF confirmed some staff from the Villawood Detention Centre had gone into self-isolation after concerns they had been exposed to the virus at the Crossroads Hotel in Casula, which has been linked to more than 20 cases.

Kiwi criminals to be deported after months in virus lockdown