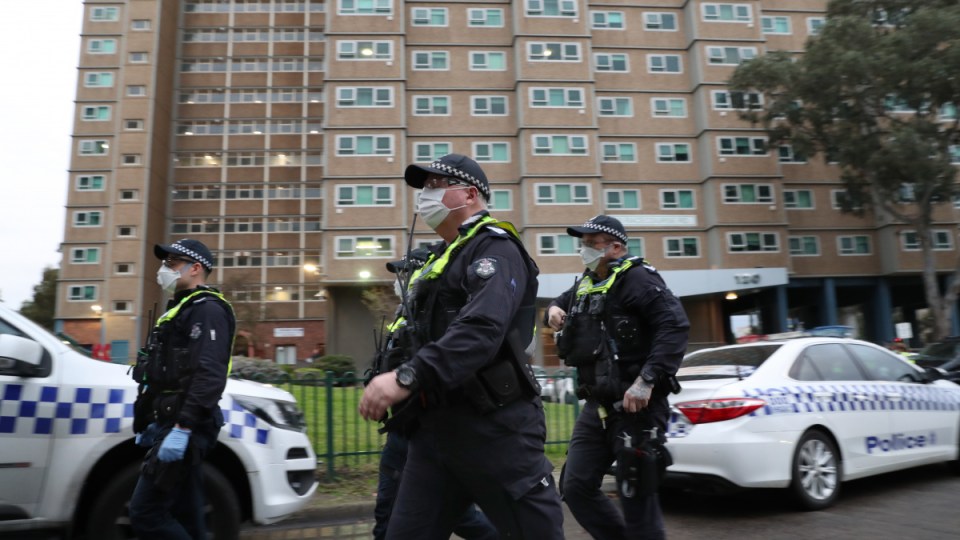 Public housing tenants’ advocates were not consulted by the Victorian government before it announced that thousands of public housing residents would be forced into “hard lockdown”, The New Daily can reveal.

Residents called from windows that they didn’t how they would get to their jobs and demanded to know what they were to eat, with trips to supermarkets banned.

Police subsequently delivered emergency rations – and that didn’t go any better, with residents complaining they were given mis-matched food items – and even then, not enough of them.

People in the Melbourne public housing estates say these are the type of food boxes they’ve been provided with – “mismatched” food like “Weet-Bix with no milk” pic.twitter.com/stG13tnDlt

Mr Andrews announced on Sunday that tower residents will have their rent waived for the next fortnight and receive a hardship payments.

The public housing estates are located in Flemington, Kensington, and North Melbourne (postcodes 3031 and 3051), with the areas added to the growing list of Melbourne suburbs on lockdown.

The affected towers are home to 3000 residents, and have been identified as the source of at least 23 cases across 12 households.

The residents of the estates were confined to their units “for a period of at least five days, effective immediately”, Mr Andrews announced.

No-one will be allowed out of those public housing towers, he said.

The “hard lockdown” of the towers is “unlike suburban stay-at-home orders currently operating”, the premier said, as residents are not allowed to leave their homes at all.

You will not be able to leave your unit for any reason.

Public health authorities will seek to test every resident of the nine estates, and those who refuse testing will be forced to remain in their units for longer.

Neither of the peak groups were consulted before the decision was made public.

The premier said it would be a “massive logistical task” to make sure all residents were fed and that Victoria Police would oversee the operation, with at least 500 officers per shift.

Victorian Council for Social Services chief executive Emma King told The New Daily that it was a “dramatic” but necessary move.

Public housing lockdowns are a dramatic move, but we know they’re being done to protect tenants, she said.

“This is a public health decision and we don’t quibble with that. We don’t want COVID-19 ripping through and effecting tenants on mass. But we do need to make sure they’re done right.”

Making sure residents fully understood what was happening and ensuring access to any extra health services they need would be critical to the lockdown’s success, Ms King said.

“In public housing, we have communities with people with broad experiences. We know some have fled war zones, some have experienced family violence and many don’t have English as their first language. They work casual and insecure jobs,” she said.

So this lockdown has significant issues. It will scare people, and for some people, it will trigger past trauma.

Telling public housing residents who live in cramped conditions that “you can’t leave your house”, and “having the police on your doorstep”, is “confronting”, Ms King said.

“They’re on the frontline of a public health emergency,” she said.

Victorian Public Tenants Association told The New Daily they would be “monitoring” the situation closely and providing up-to-date information for tenants throughout the hard lockdown.

“We became aware this afternoon that nine public housing high-rise apartment buildings will be quarantined as part of the response to COVID-19,” a spokesperson said.

COVID-19 is a highly infectious virus, and it does not discriminate based on income or housing tenure. However, overcrowded living conditions assist the virus to spread.

“We believe that if Victoria had more public housing, this would be less of an issue.”

The extended lockdowns come as Victoria faces growing national backlash for its handling of the coronavirus.

“Absolutely it puts us all at risk,” said Professor Emeritus Gerry FitzGerald, a public health expert at the Queensland University of Technology and a former chief health officer Queensland.

“The penalty we pay for our success [containing the virus nationally] is we have 25 million people who still haven’t had this disease,” he said

“While the national numbers are small, 60 to 70 [new cases] a day is starting to stretch the capability in Victoria.

We’re all terrified about what’s happening. This is an outbreak of sustained community transmission.

“It’s manageable now but look at the US. They had 52,000 yesterday. There’s no way we could handle that.”

“We really are the embarrassing uncle at the family dinner in Victoria,” he said in an interview with Nine’s Today.

The state health department has urged Victorians in hotspot suburbs to get tested after it was revealed in the week that more than 10,000 people refused testing over the past week.

A spokesperson for the state’s health department said it was “critical” those in hotspots got tested.

“It is critical that people in the priority suburbs get tested, whether they have symptoms or not,” they said.

“Anyone feeling unwell or experiencing symptoms is urged to get tested for coronavirus, and to self-isolate until they receive their results.”