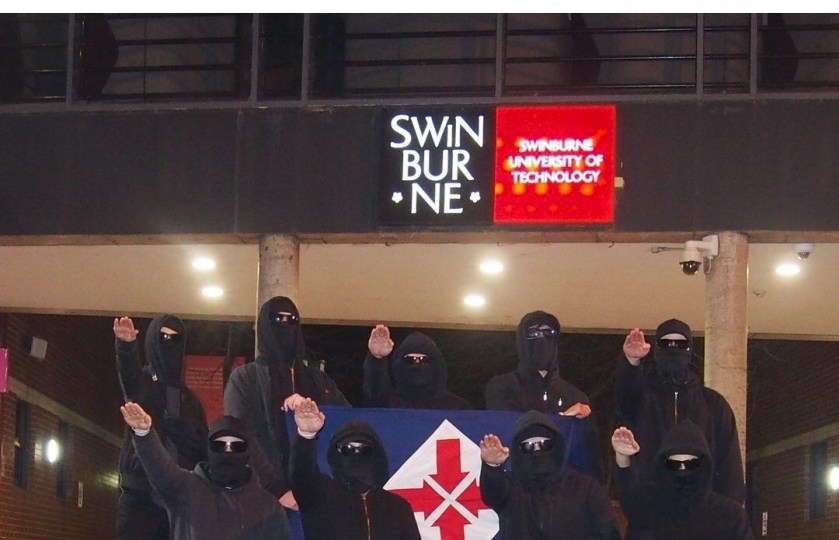 Swinburne University says it did not give the National Socialist Network permission to enter its grounds. Photo: VK
exclusive

A neo-Nazi group dressed in black with their faces covered have been pictured flashing the Hitler salute at the Swinburne University of Technology in Melbourne.

The National Socialist Network, which advocates white supremacy, posted the image to Russian-based social media network VK with the caption “Swinburne for the White Man”.

It thanked “the student body and faculty” for allowing them to come on campus to advance their far-right agenda “without opposition”.

Swinburne University said the group did not have permission to be on campus and that it “abhors” the symbols depicted in the image, along with their comments.

The photograph shows seven men doing the Nazi salute in front of a Swinburne University logo, while two others held up the group’s flag.

The men concealed their faces, and were clad in matching black hooded tracksuits, sunglasses, and masks.

They do not represent the views of Swinburne staff and students, a spokesperson for the university said.

The men “entered the campus to take the photo and left soon afterwards”, the spokesperson told The New Daily.

“They are not welcome on our campus,” they said.

The views and ideas of groups such as this run counter to everything our university stands for, and we condemn them in the strongest possible terms.”

The New Daily understands the university is not gated, and that despite classes shifting online due to the coronavirus pandemic, members of the public can still enter their premises.

Dr Dvir Abramovich, chairman of the Anti-Defamation Commission, said the group’s actions were “despicable and cowardly” and “violate the campus climate”.

“These dangerous racists are pushing their online activities to the real world in a very open way by visiting universities, which may result in violence if a confrontation takes place,” Dr Abramovich said.

We would not be surprised if some students seeing this evil image will feel unsafe and scared.”

He warned that white supremacists have been “ratcheting up their intimidation” to expand their base and recruit new members due to “growing appreciably more agitated, angry and emboldened”.

In a membership form, seen by The New Daily, the National Socialist Network says it opposes “the non-White invasion of this continent”.

The form states they only accept members who are “white Australian of non-Semitic, European descent” and mandates they “can only work with people living in Australia”.

Its website, which has been shut down, stated it is “dedicated to disseminating the National Socialist worldview among the Australian public and increasing racial consciousness among White Australians”.