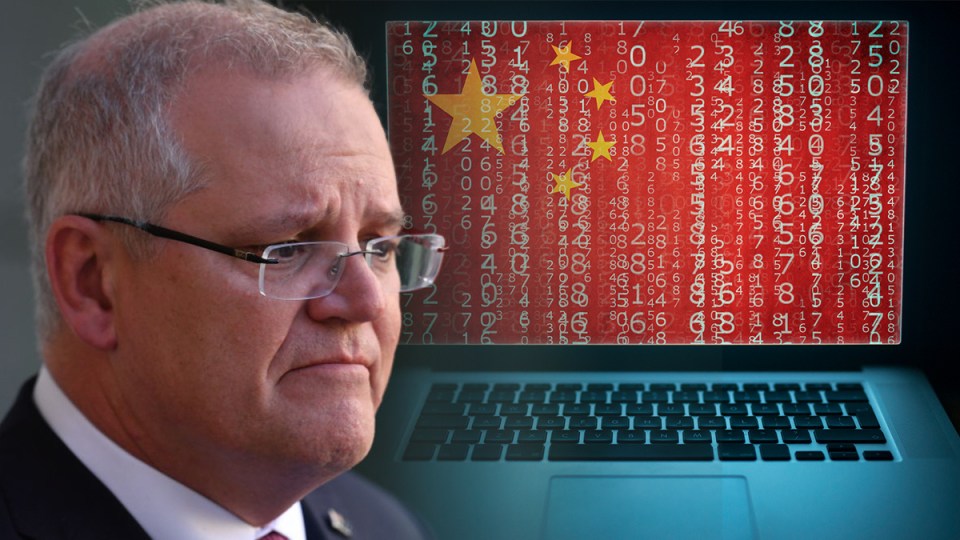 Prime Minister Scott Morrison is under fire for his cyber attack claims.

The Australian government is struggling with the task of reliving the dream of a “comprehensive strategic partnership” with China, while at the same time whispering it is increasingly a “malicious” actor in our regard.

The latest example of double speak was the almost breathless announcement that Australian governments, agencies, businesses, universities and even individuals were being targeted by “a sophisticated state-based cyber actor”.

The Prime Minister on Friday said “regrettably this activity is not new but the frequency is increasing”.

Not once did either minister, or any senior minister in the following days name China.

Finance Minister Mathias Cormann echoed his boss when he said the standard of proof to be so bold is “exceptionally high”.

So do any of them have any doubt who is behind these attacks?

Not if you believe the briefings from their offices and the off-the-record confirmations.

The spectre of China launching a major cyber attack, that can disrupt electricity grids, food security, transport logistics and spread misinformation and disinformation undermining confidence in government communications, was very scary and set the radio and TV airwaves buzzing.

Mr Morrison had overshot and he knew it.

Later that day he blamed the headline writers, hoping no one would notice that the most hysterical had been given an early drop on the story.

Mr Morrison refused point blank to clarify whether he meant a single, specific, ongoing attack or to confirm he was talking about China.

There was reassurance from Western Australia’s premier Mark McGowan that his government’s agencies were successfully thwarting cyber incursions.

The New South Wales government was similarly briefing journalists with the rider that while they had informed Canberra they had thwarted recent hostile cyber activity, they were surprised Mr Morrison went for his megaphone.

No one was more unimpressed by the Prime Minister’s defence that he was really only trying to raise awareness among Australian businesses than Labor’s cyber security spokesman, Tim Watts.

Mr Watts says one of the first things Mr Morrison did on taking the top job was to abolish the role of minister for cyber security. It was folded into Peter Dutton’s mega Home Affairs portfolio.

The Turnbull government’s Cyber Security Strategy expired two months ago with no priority from Mr Dutton, who has been working on a new strategy for 10 months.

Mr Morrison says a new strategy will be unveiled in coming months.

The Auditor-General has found only one in four federal entities have implemented the measures, while this year’s Commonwealth Cyber Security Posture report found implementing prescribed safeguards “remains at low levels across the Australian government”.

Diplomatic sources in Canberra have no doubt the increased cyber activity is China’s reaction to what it sees as Australia playing the role of a “US henchman” in the United Nations.

The Global Times, published under the auspices of the Central Committee of the ruling Communist Party of China, warned on Sunday that being a “US proxy” only “jeopardised relations with China”.

Being the US henchman, Australia learns about only political manipulation rather than justice and morality and has criticized China’s “domestic human rights abuses,” which only jeopardized relations with China and sacrificed its diplomatic independence. https://t.co/gTbPF3Qs1N pic.twitter.com/DUY34sm9X8

The Trump administration is cheering, as are the China hawks, Labor and Liberal on the backbench in the Parliament.

They have even  named their group the “wolverines” – a reference to the 1984 movie Red Dawn where high school kids thwarted a Soviet attack on America.

One is believed to have leaked the fact that two of Australia’s most eminent experts on foreign affairs, security and intelligence Dr Allen Gyngell and Dennis Richardson addressed Labor’s shadow cabinet on the need for “sensible engagement with China”.

The Daily Telegraph duly obliged with the front-page headline “Labor’s footsie with Beijing”.

It’s a long way from the Liberals boasting that only they were serious and capable of achieving a free trade deal with the Asian giant.

This strident reprise of 1950s cold war panic has many wondering what do these critics want, a decoupling from our largest trading partner?

For starters with $11 billion a year at stake, it’s not an academic question for our universities.