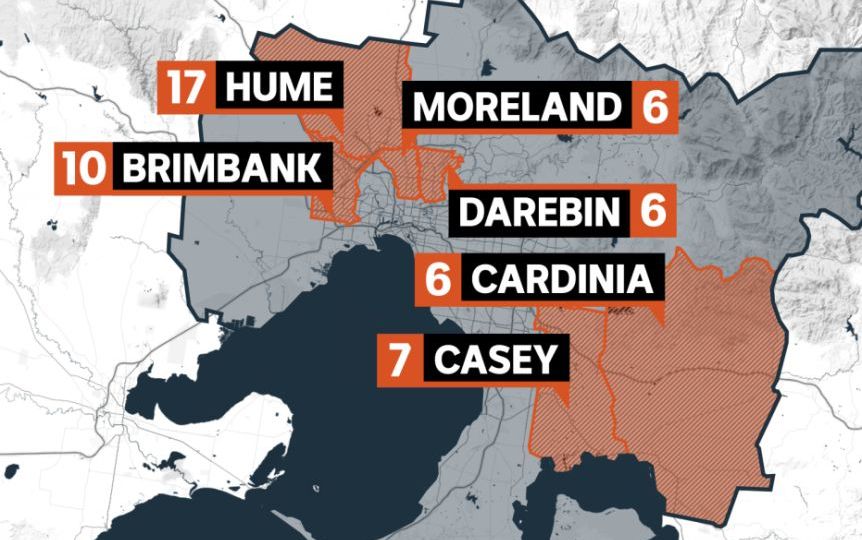 This map shows the Victorian local government areas authorities are most concerned about, and the number of new cases each has recorded this month. Photo: ABC News

A panel of chief health officers has urged Victorians to steer clear of six local government areas after a dramatic spike in COVID-19 numbers.

And interstate school holiday travel is in doubt, as NSW authorities weigh up whether to keep borders open.

Victoria has stopped short of putting suburbs into lockdown.

But overnight Sunday, the Australian Health Protection Principal Committee called for Victorians to avoid six virus hotspots in Melbourne and for residents who live in them not to leave their suburbs.

They are the cities of Hume, Casey, Brimbank, Moreland, Cardinia and Darebin.

It said Victoria had accounted for 83 per cent of new coronavirus cases recorded in Australia in the past week.

“The AHPPC strongly discourages travel to and from those [six local government] areas until control of community transmission has been confirmed,” the committee said.

NSW Premier Gladys Berejiklian will receive a fresh briefing by Dr Chant on Monday morning. She has been strong in her opposition to closing state borders.

But with NSW schools starting holidays next Friday and Victorian students to go on break at the end of this week, she might have little choice.

“NSW will continue to monitor the health situation in Victoria and nationally,” a spokesperson for Ms Berejiklian said.

“The NSW government, in consultation with the chief health officer, will continue to take the steps required to protect the health of our citizens.”

Deputy chief medical officer Nick Coatsworth said the APPHC had “every confidence” the outbreak in Victoria would be brought under control.

But he said each state needed to manage spikes according to their own circumstances, and while Victoria had decided to suspend some other easing of restrictions, there was no need for other jurisdictions to change their plans.

An Australian research team says it has shown that a new anti-viral drug has significant blocking ability against the virus that causes COVID-19.

Hailing a global breakthrough, Monash University researchers have conducted modelling of the drug, which could be administered as an inhaler, to highlight its blocking ability.

Senior research fellow Tom Karagiannis said he and his team had tested the way a designer molecule called a-ketoamide blocks one of the proteins needed to replicate the virus that causes COVID-19.

Dr Karagiannis hopes the drug might be available as early as the end of the year.

The research comes after German researchers in May published new data on an improved version of a-ketomides they said work more effectively in humans.

The Australian reports Dr Karagiannis and his colleagues used a supercomputer to study the way the improved version blocks the triggering of the replication of the virus that causes COVID-19 and found it acts as a handbrake on the virus’s ability to replicate.

“This molecule stops the virus from replicating, which can then stop the release of new virus particles and infection of other cells in the body,” Dr Karagiannis said.

Australians warned not to travel to these six virus hotspots