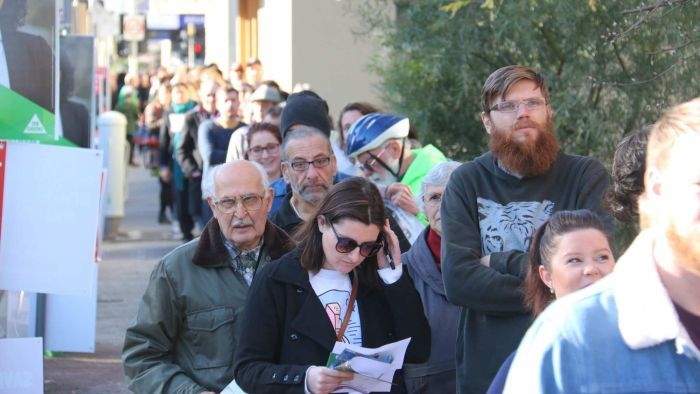 Engaged in politics or forced to the polls? Australians line up on election day. Photo: AAP

Prime Minister Scott Morrison has at times justified his government’s policies as representing the attitudes of ‘quiet Australians’, but it turns out those people probably couldn’t care less.

A new Australian study has shown that around one in five adults  consider ourselves non-partisan, with levels even higher among younger Australians, and that is resulting in an increased lack of any engagement with politics.

Drawing on data collected from the Australian Electoral Study (Cameron and McAllister 2017), the report was co-authored by Jonathan Smith, Research Fellow in Sociology at Australian Catholic University and Bruce Tranter, Professor of Sociology at the University of Tasmania.

Their work concluded that non-partisans tended to pay less attention to politics and were more likely to decide how to vote on the day of the federal election or submit an informal vote. 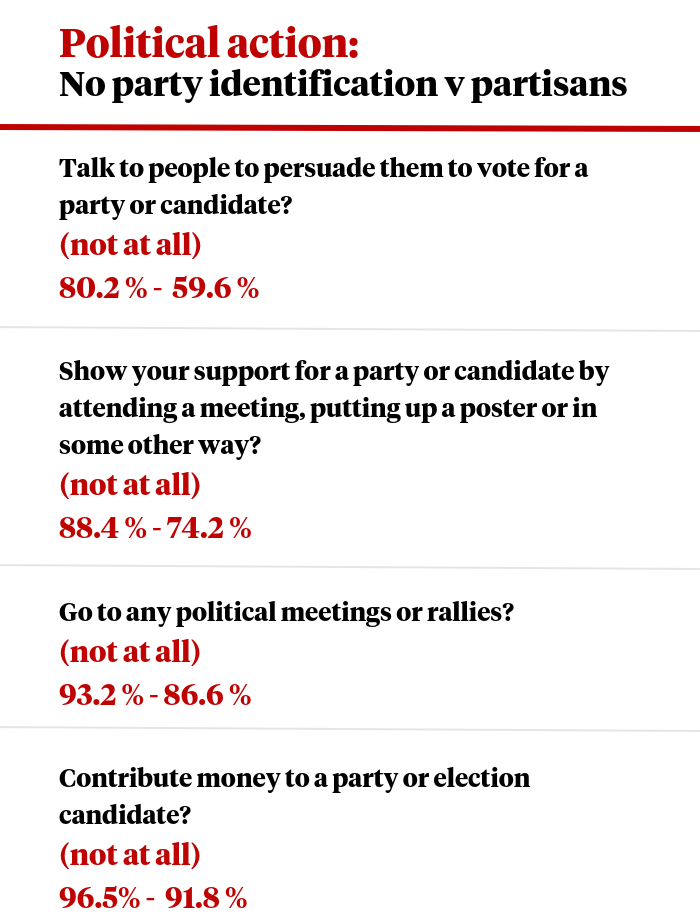 Young people showed especially high levels of non-partisanship, with around one in three saying they didn’t support a particular party.

Professor Tranter told The New Daily that in the past strong levels of partisan attachment meant that major parties could rely on a stable ‘core’ of supporters, who tend to orientate themselves on key social issues.

But that is waning.

“On the one hand, there has been a proliferation of support for minor parties as voters become more issue-based rather than party-based in their voting decisions,” Professor Tranter said.

“On the other hand, as we have shown, there is also a rise in those who are non-aligned with any political party and tend to be alienated from the political process.

“Both trends contribute to less-predictable voting patterns and make it harder for major parties to form an outright majority without preference deals with minor parties or finding ways to mobilise non-partisans.

Co-author Dr Smith says it also appears that the children of people not engaged in politics is also accelerating the trend.

“There is a well-documented tendency for children to ‘inherit’ support for major political parties from their parents,” he said.

“But what happens when supporters of minor parties or non-partisans have children?

“Until now we have not been able to survey the offspring of such groups in sufficient numbers to answer this question … In this research, perhaps more worryingly, we found that non-partisanship was also ‘handed down’ in a similar way.

Our findings actually reinforce the importance of parental influence – even when parents express no support for political parties or interest in the political process, they still shape their children’s orientation towards, or rather away from, politics.’’

And he says the changing media landscape is also having an influence.

“For instance, we found that non-partisans are less likely than partisans to consume political content or political dialogues and actions across any media, including social media.

“Political uses of such media may be predicated on a level of motivation and interest in politics, as well as general level of education, that result in non-partisans being less willing or able to participate in the political discussion.”

Professor Tranter said the findings are a wake-up call for all major political parties and those who value democracy.

“Decreasing interest in politics partly reflects a general decline in political trust in Western democracies over time,’’ he said.

“However, some recent data suggest that trust in incumbent political leaders may have increased under the COVID pandemic.

“While we can only speculate, it is possible that the key role played by Australian political leaders in dealing successfully with the pandemic (so far), may begin to rebuild political trust among the public, with a potential flow-on effect for strengthening partisanship.

“Alternatively, recent reports of branch stacking could have the opposite effect.”