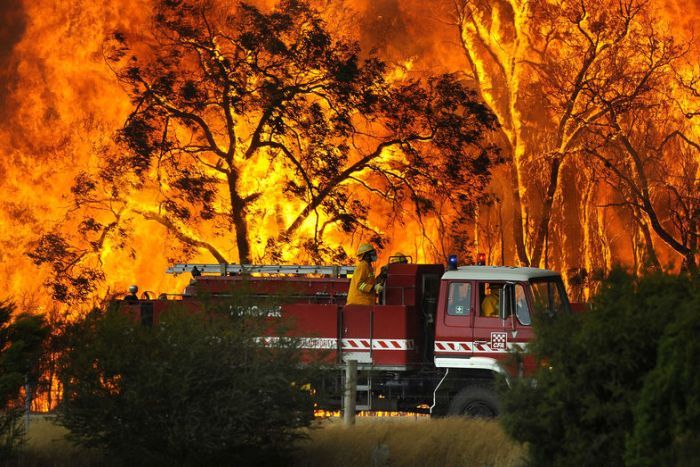 Australia experienced almost as many firestorms – bushfires so intense they create their own weather systems – during the ‘Black Summer’ season as in the previous three decades.

Firestorms or pyrocumulonimbus events were previously considered to be bushfire oddities, University of Tasmania expert David Bowman told the royal commission into the disaster on Tuesday.

“Unfortunately this last summer there was a near doubling of the record of these events, in one event, and that assembly of data goes back about 30 years,” said Professor Bowman, referring to University of NSW data.

“Something happened this last summer which is truly extraordinary because what we would call statistically a black swan event, we saw a flock of black swans.

“That just shouldn’t have happened.”

Professor Bowman said such events could be associated with extraordinarily destructive fire behaviour such as occurred when the Tasmanian township of Dunalley was almost completely destroyed in 2013.

“People (were) jumping into the sea to save themselves from a true firestorm,” he told the Royal Commission into National Natural Disaster Arrangements.

Professor Bowman said in the very worst case, there could be fires with totally unpredictable behaviour.

It’s creating its own weather systems, its own behaviours, and those situations are outside the capacity of science to really predict. They’re very scary.’’

The University of Wollongong’s Professor Ross Bradstock said there were multiple pyrocumulonimbus events during the last fire season, particularly on the NSW south coast and into Gippsland in Victoria.

He said research showed parts of south-eastern Australia, particularly south of the Sydney basin, were more prone to such events than areas further north.

The firestorms create their own thunderstorms, extreme winds and lightning.

Before this fire season, there were about 60 pyrocumulonimbus events recorded in Australia since 1998, UNSW researchers noted in February.

The devastating Black Summer bushfires, which burned an estimated 35 million hectares of land across Australia, sparked renewed debate about the effectiveness of prescribed or planned burning undertaken before fire seasons.

“In a season like we had, it does highlight the limitations on fuel management as a method of stopping these sort of fires on those worse first condition days,” he said.

Professor Bowman said there were clear benefits to fuel treatments like prescribed burning, but they were localised and heavily contingent on the particular environment.

“We should be treating all of our fuel management approaches as giant experiments that we’re still evaluating,” he said.

Senior counsel assisting the commission Dominique Hogan-Doran SC said it appeared to be common ground that prescribed burns can mitigate but not eliminate the risks associated with bushfire.