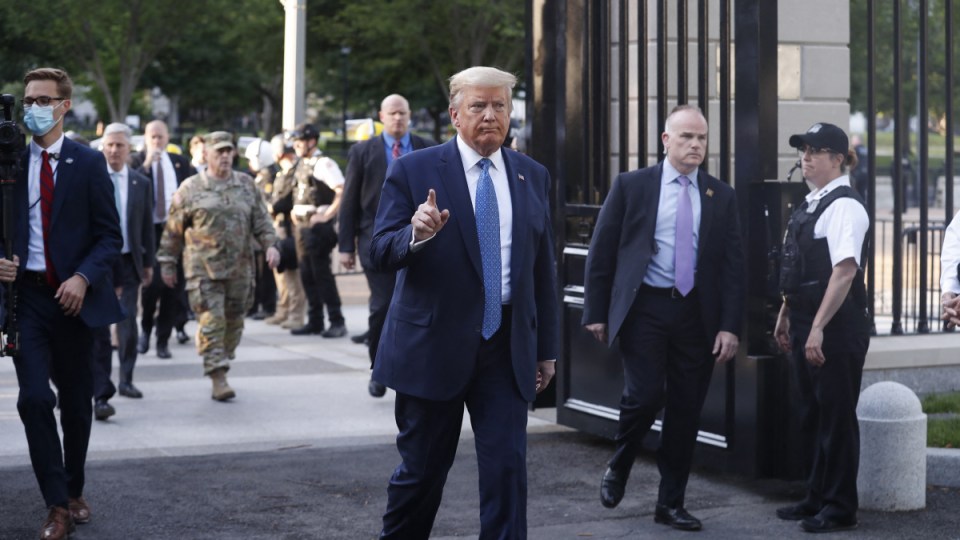 Surrounded by secret service agents, Mr Trump headed out the gates of the White House onto the streets with protesters just hundreds of metres away. Photo: AAP

In dramatic scenes, US President Donald Trump has walked the streets of Washington, DC, just metres away from protesters after addressing Americans.

Mr Trump’s walk came after a speech from the White House Rose Garden on Tuesday morning (AEST), in which he said justice would be served for the death of unarmed African-American George Floyd, 46, in police custody last week.

But, he said, immediate action would be taken against the “angry mob” of rioters who have rallied across the US in the days since – and threatened to bring in “thousands and thousands of heavily-armed soldiers, military personnel, and law enforcement officers” to restore order.

After his 15-minute address just before a 7pm curfew – and in an extraordinary show of defiance – Mr Trump walked through Lafayette Park to the nearby historic St John’s Episcopal Church, which was set on fire just 24 hours earlier.

Standing in front of the 1815 church, known as the “the Church of the Presidents”, Mr Trump held up a Bible, walked a few paces, and urged people to keep the nation’s capital “nice and safe”.

Just streets away, as the seventh night of protests loomed, federal and state police monitored hundreds of demonstrators who had continued to remain outside despite the curfew, unaware their president was just 200 metres away with his entourage walking through the park.

Mr Trump said the looting, vandalism and rioting in the nation’s capital on the previous night were a “total disgrace”.

“I am dispatching thousands and thousands of heavily-armed soldiers, military personnel, and law enforcement officers to stop the rioting, looting, vandalism, assaults, and the wanton destruction of property,” he said.

He warned that if Monday’s curfew was not respected, people would be “arrested, detained and prosecuted”.

“I want the organisers of this terror to be on notice that you will face severe criminal penalties and lengthy sentences in jail. This includes Antifa and others who are leading instigators of this violence,” he said.

“In recent days, our nation has been gripped by professional anarchists, violent mobs, arsonists, looters, criminals, rioters, Antifa and others. A number of state and local governments have failed to take necessary action to safeguard their residents.

“Innocent people have been savagely beaten,” he said.

In what has been described as an extraordinary move, the US military has readied the active-duty troops outside Washington, a senior defence official says.

The senior US defence official, who spoke on condition of anonymity to Reuters, said all of the 1200 National Guard forces in Washington DC, had been mobilised and five states were sending 600 to 800 additional Guard troops who could be on the ground by evening.

A second defence official said some of the Guard troops were armed with lethal weapons.

Beyond that, active US military duty troops – including military police and engineering units – were on standby in the National Capital Region but outside the city itself and were ready to deploy if needed.

The hope, the first official said, was that the additional Guard units would make the use of active duty troops unnecessary.

“A decision to put active-duty troops on the streets would have to be made by the president at this point,” the official said.

US Defense Secretary Mark Esper, Army General Mark Milley, chairman of the Joint Chiefs of Staff, Attorney General William Barr and others would be at a Department of Justice to coordinate the response, the first official said.

Tuesday’s developments came as doctors who carried out an independent autopsy of Mr Floyd, whose death in Minneapolis police custody triggered the nationwide protests, found he died from asphyxiation. They said his death was a homicide.

The doctors said Mr Floyd had no underlying medical conditions that contributed to his death – and that he was likely dead before he was placed into an ambulance.

Mr Trump said he was prepared to mobilise the US military to end the “violence and restore security”.

“I am mobilising all available federal resources, civilian and military, to stop the rioting, looting, to end the destruction and arson and to protect the rights of law-abiding Americans,” he said.

“We are ending the riots and lawlessness that has spread throughout our country. We will end it now.”

Mr Trump said he had recommended every state governor deploy the National Guard in “sufficient numbers that we dominate the streets”.

“Mayors and governors must establish an overwhelming law enforcement presence until the violence has been quelled,” he said.

“If a city or state refuses to take the actions that are necessary to defend the life and property of their residents, then I will deploy the United States military and quickly solve the problem for them.”

Trump takes dramatic walk in Washington DC, threatens to bring in the military to stop protests