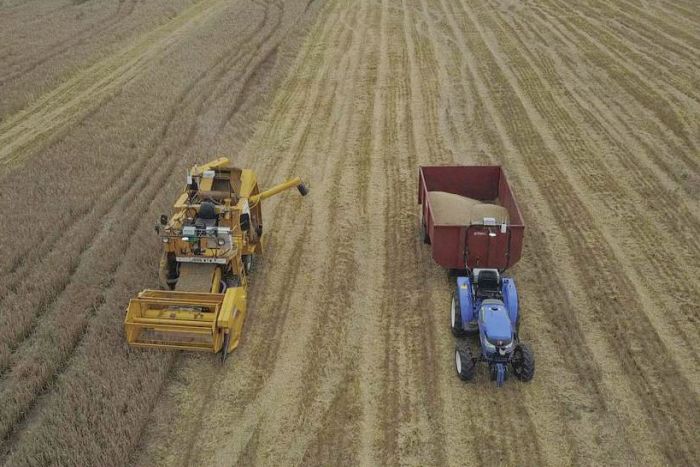 Gutted Australian barley growers have warned of a bitter blow to the nation’s economy after China slapped a whopping 80 per cent tariff on imports.

China has imposed harsh taxes on Australian barley with separate tariffs of 73.6 per cent for dumping allegations and 6.9 per cent over supposed government subsidies.

Both claims have been emphatically denied by the government and farmers.

Grain Producers Australia chairman Andrew Weidemann said the tariffs would have a huge impact on the industry.

“Most growers are completely gutted with the news,” he told Sky News on Tuesday morning.

“It’s really a bitter blow to the Australian economy as well.”

“It takes away a market that has been primarily our largest market for the last decade or more.”

Federal Agriculture Minister David Littleproud says Australia is not in a trade war with China, and will not retaliate.

“There’s no trade war. In fact, even today, I think you have seen that there’s increased demand for iron ore out of China.

“The reality is they have used a process, quite fairly, around a belief that we have not been fair in our trade. We prosecute the case, quite strongly, that that is not the case.

“That’s what you do in a fair trading system. You use the rules. China has been well within their rules in what they have done. We continue to trade openly on a number of other commodities, not only in agriculture, but in minerals and also services. This will not change.

“But we will continue to make sure that everything is done on a fair and equitable basis and when we believe that it isn’t, then we’ll have the independent umpire make that assessment,” he said on Tuesday.

Diplomatic tensions between Canberra and Beijing have soared after Australia pushed for an inquiry into the origins of coronavirus.

More than 110 nations including China backed the inquiry at the World Health Assembly on Monday night.

He said farmers would lose $500 million in value out of the current crop, which most growers have just finished planting.

“It is particularly devastating after the time that Australian farmers have had in the last number of years with droughts, floods and fires,” he told ABC News Breakfast.

Australia is the biggest barley supplier to China, exporting more than half of its exports worth up to $2 billion a year.

Producers will be on the hunt for new export markets with India and Indonesia, which has recently signed a trade deal with Australia, considered prime options.

The global trade umpire could take up to three years to deliver a decision if Australia decides to pursue an appeal.

China’s Ministry of Commerce announced the tariffs late on Monday after an 18-month investigation.

“The investigating authority has ruled that there was dumping of imported barley from Australia and the domestic industry suffered substantial damage,” the ministry said in a statement.

Beijing’s ambassador in Canberra has also raised the prospect of consumer boycotts over the coronavirus inquiry.