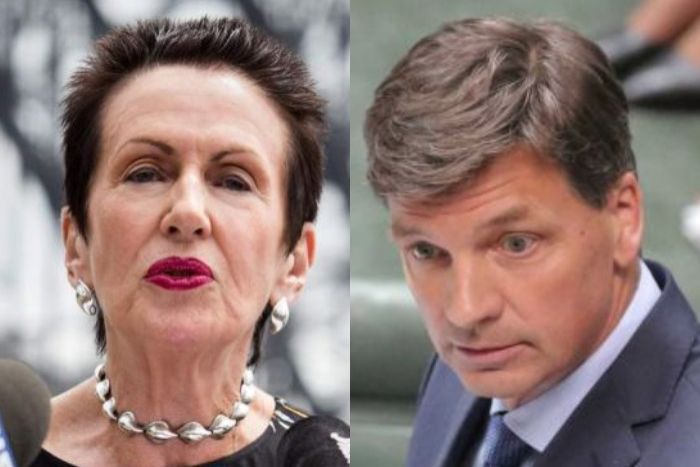 The Australian Federal Police did not obtain evidence of an allegedly forged document federal Energy Minister Angus Taylor used in an attack against a Sydney council, despite suggestions from the minister he had relied on figures from it.

The AFP had been asked to consider investigating Mr Taylor and his office, after his decision to scold Sydney Lord Mayor Clover Moore spectacularly backfired.

It has now released detailed answers to questions from the Senate about its early deliberations, noting officers also did not check who had downloaded specific files seemingly relevant to the matter before it decided it was not worthy of a full-blown investigation.

Mr Taylor took aim at Ms Moore’s criticism of the Coalition’s climate policies, labelling them as hollow considering her council had racked up millions of dollars in domestic and international travel.

It sparked calls for an investigation into whether the documents Mr Taylor’s office relied on were falsified, with New South Wales Police initially considering the matter before handing carriage of the inquiry to the AFP.

Mr Taylor said the figures were obtained from a publicly available document but apologised to Ms Moore for the incident.

In response to questions from Opposition home affairs spokeswoman Kristina Keneally in March on whether the AFP had “found any evidence that the draft version had ever existed on the City of Sydney website”, police said “no evidence regarding this was obtained”.

The AFP also confirmed it “formed no concluded view” on whether the documents Mr Taylor relied on were forged.

Officers considering the case were given access to the metadata from the City of Sydney, but did not obtain evidence on who had downloaded the annual report alleged to have contained the incorrect figures, or whether Mr Taylor or his staff had accessed the document themselves.

“As the AFP determined not to pursue the investigation, no evidence regarding this was obtained,” the AFP said.

Earlier, Senate estimates hearings heard from Mr Taylor’s department, which said it had records the City of Sydney website had been accessed but had no record of a file being downloaded.

Police have also again stated they did not interview Mr Taylor and his staff, or City of Sydney officials.

Rather than conduct its own interviews, the AFP relied on inquiries made by New South Wales Police.

“The minister has made a comprehensive statement on this matter,” a spokesperson for Mr Taylor said in a statement.

“Two police forces have considered this matter and have closed their separate inquiries.

“As the AFP Commissioner has said, ‘the matter is finalised’.”

Police have also again stated they did not interview Mr Taylor and his staff.

The AFP relied on inquiries made by New South Wales Police rather than interviewing City of Sydney staff themselves.

In deciding not to mount a full investigation, which the agency announced earlier this year, the AFP said it had taken into account a range of factors.

“These considerations included: The lack of any information to suggest the minister was involved in any alleged falsified document; the fact the alleged conduct did not involve the misuse of Commonwealth funds or deception to gain financial advantage, and the alleged criminality in the context of the numerous serious criminal allegations which are routinely referred to the AFP (including for war crimes, child exploitation, terrorism, cybercrime and serious drug and fraud matters),” the police said.

“The AFP concluded there was a low risk of ongoing harm to community as, once the figures were publicly acknowledged by the minister to be incorrect, there was little risk of the public continuing to be misled or form an adverse view of Ms Moore based on the incorrect figures.”

With federal Parliament’s return this week, Labor will use the answers to ramp up pressure on Mr Taylor over the incident.

“It is beyond doubt that Angus Taylor misled the Australian Parliament about the origin of the dodgy document he circulated,” Labor frontbencher Mark Butler said.

“At a time when trust in government is more important than ever, it’s critical that a minister who has failed to be honest is shown the door.”