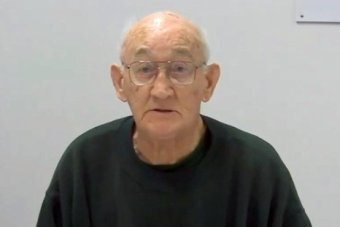 Victims have lashed Australia’s most prolific pedophile priest Gerald Ridsdale as a “bastard” after he admitted to raping more boys, but his lawyer argues he should be spared from extra jail time.

The 86-year-old admitted to more than a dozen rapes and indecent assaults against four victims aged seven to 16 in Victoria’s west and Surf Coast in the 1970s.

“I plead guilty to every charge,” Ridsdale said in the County Court on Monday.

Two victims were brothers who were abused when the then-parish priest took them rabbit shooting.

“We trusted our beautiful, innocent children with this bastard without question when we should have been more vigilant on their behalf,” the elderly parents of the brothers said.

They labelled him as a “filthy, conniving, make-believe priest and pedophile”.

The older brother was also raped by Ridsdale and suffered flashbacks from when he heard the pedophile’s footsteps head to his room.

“The sound of squeaking floorboards causes me extreme anxiety,” he told the court.

The pedophile told the victim after raping him: “Don’t tell anyone anything. They won’t believe you over a priest.”

Another survivor questioned whether circumstances would have changed if he had spoken up about his assaults earlier.

Despite the former priest admitting to the abuse, his lawyer Tim Marsh said his client shouldn’t spend more time behind bars for the crimes.

The rapist is serving a 34-year sentence for his horrific offending and is expected to die in custody.

But he could also be released in less than two years if granted parole.

Mr Marsh suggested an appropriate sentence would be one that does not interfere with the earliest possible release date and if Ridsdale had been sentenced for all his crimes at once his jail time would not exceed the existing sentence.

The prosecution labelled this as “inappropriate” and pushed for more prison time.

Judge Gerard Mullaly questioned how Ridsdale was able to offend to such a degree.

“There’s something unique about the fact that he had the apparatus of the Catholic Church behind him,” Mr Marsh said.

“Had he been a man in virtually any any other walk of life it’s highly unlikely it would have gone on for the extent that it did for as long as it did.”

But the judge said Ridsdale could not be punished for the “failings of the institution”.

He will be sentenced for the latest offending in two weeks.