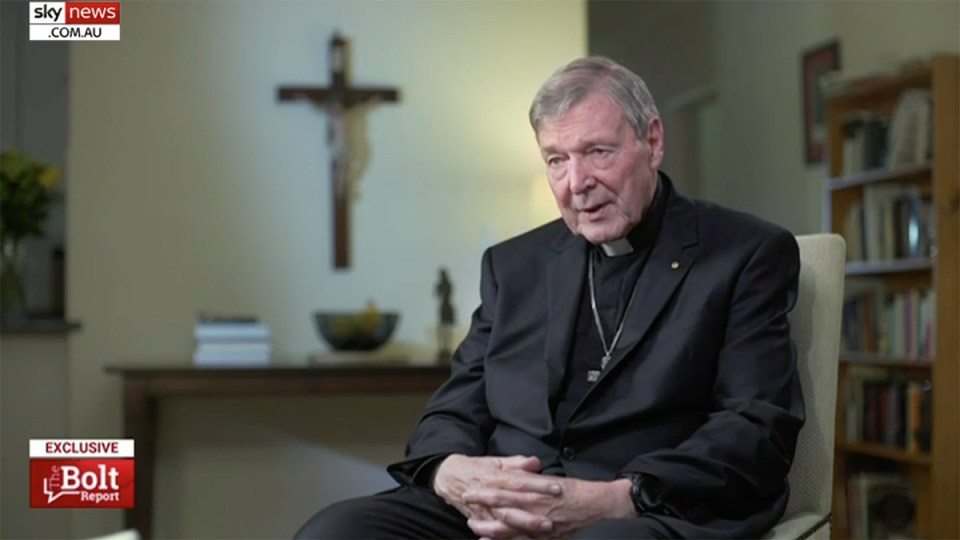 Cardinal George Pell says it’s “ironic” that he was convicted of child sexual abuse when it was he who led the Melbourne Archdiocese response against it.

“I think it’s a bit ironic that I’m the figurehead, the scapegoat that has copped most of this because what I did very early in 1996 is set up the Melbourne Response,” he told commentator Andrew Bolt in an interview on Sky News’ The Bolt Report on Tuesday night.

Cardinal Pell said he had been “wounded” by his experiences but wasn’t deeply scarred because he knew he was innocent.

The cardinal was convicted in December 2018 of five charges of child sexual abuse relating to allegations he raped a 13-year-old choirboy and molested another at St Patrick’s Cathedral in 1996.

He was acquitted by the High Court last week and released from jail after 405 days behind bars.

EXCLUSIVE: Cardinal George Pell has revealed throughout his sexual abuse trial and time incarcerated the thought of committing suicide "never entered (his) head" due to his strong faith and belief in his innocence. https://t.co/AEEKcIPxFI

The cardinal revealed he contributed savings to his defence, as did a lot of generous people including some wealthy people who “kicked in very solidly”.

Cardinal Pell’s defence included two trials, neither of which he gave evidence at, though he considered it at his second trial.

But he said he was concerned he would “come across as my nasty aggressive self” and have a go at prosecutor Mark Gibson SC, ultimately deciding it might be counterproductive.

Cardinal Pell says there has also been speculation about whether his role uncovering corruption within the Vatican had played a role in his legal troubles.

“Most of the senior people in Rome, who are in any way sympathetic to financial reform, believe that they are,” he said.

“Going from possibility to probability to fact, I don’t have any evidence of that.”

He said he doesn’t know how high up the corruption goes.

EXCLUSIVE: Cardinal George Pell said he was taken aback by how prisoners in Barwon Prison were damaged by ice, telling Sky News many of them “were roaring in anger and anguish.”https://t.co/bTz9Bgs8by

The cardinal also spoke of ongoing support from Pope Francis who, despite their differing theological views, he believes values and respects him for his honesty.

“He has been very supportive right through. Even my theological opponents in Rome didn’t believe the story,” he said.

Cardinal Pell said the suggestion that he’s anti-victim or not sufficiently sympathetic toward abuse survivors grieves him, and that he worked hard “when it wasn’t easy or fashionable”.

But he admitted he is ashamed of the church’s response and “occasionally” wished he had done things differently.

He said priests were trained to think well of people and he didn’t regret that, but instinct in the past was to disbelieve allegations as gossip unless substantiated.

But he said “it wasn’t as though we were alone in this” when asked about police working with bishops to move pedophiles.

He said he didn’t know about that at the time.

As for the future, Cardinal Pell said he would spend some time in Rome but plans to stay in Sydney, writing and growing cabbages.

His time in prison gave him an interest in people who are “wrongly condemned”, including a friend he met in Barwon Prison who was convicted of murder.