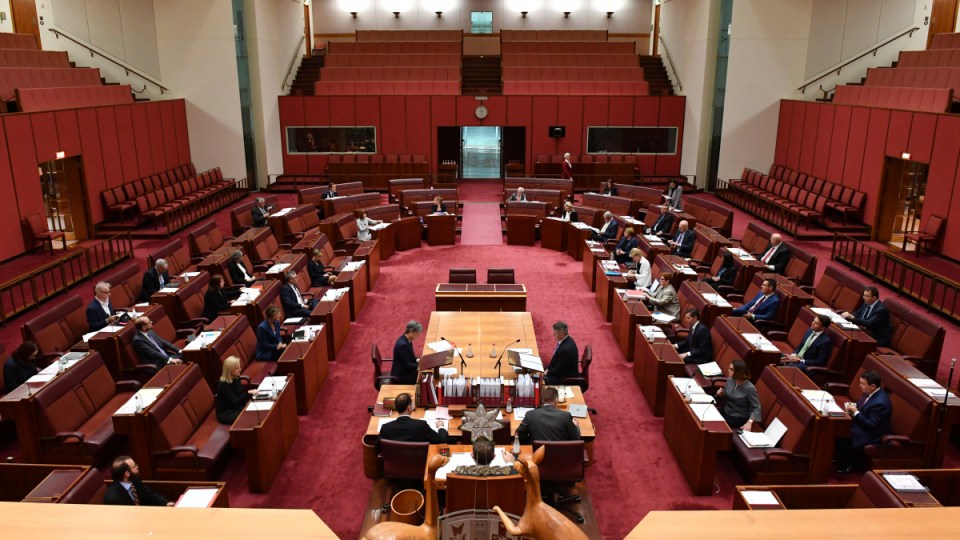 Social distancing was in effect in the Senate on Wednesday as the JobKeeper legislation was passed. Photo: AAP

Eligible workers are set to receive a $1500-a-fortnight wage subsidy for at least six months after Parliament approved the $130 billion JobKeeper legislation on Wednesday night.

The Senate gave bills to establish the JobKeeper program, paving the way for up to six million employees to receive the cash in what is the single largest piece of government spending in Australian history.

More than 730,000 businesses have registered for the JobKeeper program since it was announced last week.

They will be given the money via the Australian Taxation Office to pass on to workers as the government desperately tries to save millions of jobs during the coronavirus pandemic.

Firms will be eligible if they can demonstrate a 30 per cent virus-related turnover hit, with the threshold set at 50 per cent for companies turning over $1 billion.

All full-time and part-time workers will be covered, along with casuals that have at least one-year link to their company.

Details are available from the Dynamic Red https://t.co/Wi8bN9E81O

Under late changes to the bill, workers who have their hours cut will be able to request time to work a second job.

The Fair Work Commission will be able rule on worker disputes with employer behaviour including stand-down periods and changes to people’s work location or duties.

Workers can agree to change their days, while bosses could also ask for annual leave to be taken, provided employees have two weeks left over.

The Senate established a Labor-chaired select committee to scrutinise all aspects of the government’s coronavirus response.

Tonight the Australian Parliament delivered for the Australian people passing the $130 billion #JobKeeper payment with around 6 million Australians expected to receive $1,500 a fortnight.

We are doing all that we can to keep Australians in jobs & businesses in business. pic.twitter.com/wJBKxVHemH

Labor and the Greens had argued for changes to the scheme to include more casuals and migrants on temporary work visas, arguing more than one million people in each cohort would be excluded.

But the government rejected the push, insisting a line had to be drawn somewhere.

Many who are not eligible for JobKeeper can potentially access $1100 a fortnight in dole payments, which have been temporarily doubled during the crisis.

JobKeeper payments will be made to employers for up to six months, backdated to March 30.

The government also rebuffed calls to include council workers in the wage subsidies, arguing they were a state responsibility.

‘‘But while it might not be perfect, this package is good. It will make a difference to people’s lives. It will save livelihoods. It’s the direct result of the constructive role that unions, businesses, community leaders and Labor have played – together,” Mr Albanese said.

‘‘As we rebuild, we should be guided by the principle of an economy that works for people, not the other way around.

“And we should be reminded of just how much we rely upon each other – and how much stronger we all are when we all work together. No one held back. No one left behind.”