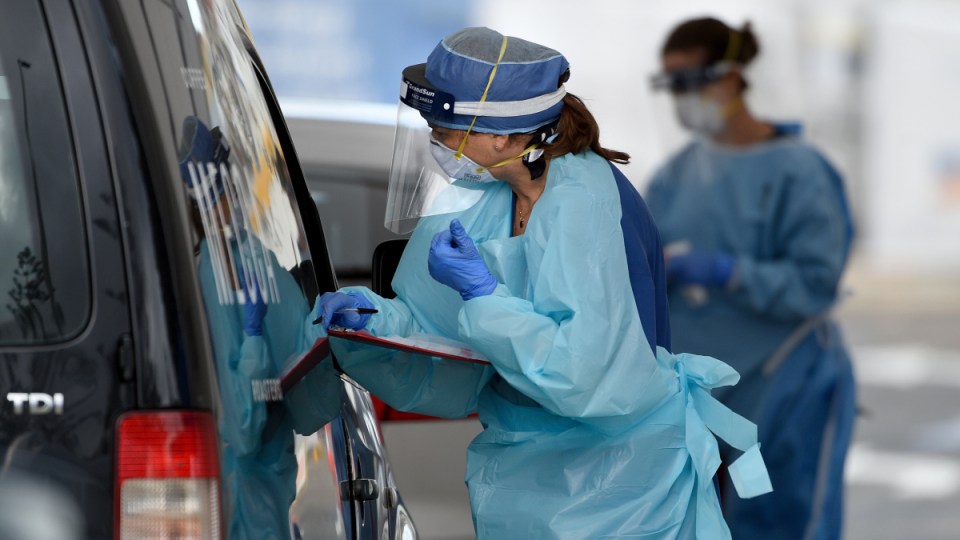 A man has been charged after a Melbourne COVID-19 testing site worker was hit with a stolen car. Photo: AAP

Australia faced a “catastrophic” death rate from COVID-19 if political leaders had failed to act to shut down borders and businesses, according to secret government modelling to be released on Tuesday.

Health Minister Greg Hunt said the figures will underline the life-saving effect of the shutdowns that have forced thousands of Australians into unemployment.

“Were there to have been no actions by the government, we could have had a catastrophic death rate and death toll,” Mr Hunt said.

“Early on, we were worried because we could see predictions of a globally catastrophic virus. Sadly, we are seeing that play out in some countries.

“That scenario was before us.”

Just a fortnight ago, Australia’s deputy chief medical officer Paul Kelly urged Australians to “do the maths” on how many people would die from COVID-19.

The numbers were terrifying.

It suggested up to 150,000 Australians could die from the killer virus, which still has no known vaccine.

No amount of reassurance that the majority of COVID cases are “mild” could sugar-coat that number.

Professor Kelly came close to nominating the potential death toll on March 16, when he conceded anywhere between 20 and 60 per cent of the nation’s citizens could contract the disease.

“It’s something in the range. I’m not going to speculate on the actual numbers,” Professor Kelly said.

“The death rate is around one per cent. You can do the maths.”

Based on the more conservative prediction of one in five Australians contracting the virus, that would result in five million people being infected and about 50,000 deaths based on a 1 per cent death rate.

But if 60 per cent of the population was infected, the death toll could rise to 150,000 people and 15 million patients, overwhelming GPs and hospitals.

Just a few weeks on from that grim prediction, the Morrison government is more confident the tough measures to shut down the nation’s borders, pubs, cafes and restaurants are working.

On Tuesday, after national cabinet meets to discuss the COVID-19 modelling, it will be released in some form designed to reassure families that the lockdown tactics are working.

The majority of cases are from New South Wales, followed by Victoria and Queensland.

There are clues in those numbers about at-risk groups: The higher proportion of females in the 20 to 29 age group is under investigation.

In men, there’s a higher proportion of cases in an older 40 to 49 age group.

The good news is that “the curve” of new cases appears to be flattening for now.

Over the past 24 hours was 2 per cent, compared to 12 per cent reported a week ago.

The vast majority – 66 per cent – have recent international travel history.

Australia has conducted 300,000 tests and about 2 per cent have been positive.

It’s important to do things that help us build and maintain good mental health. Planning activities that are fun and give you a sense of achievement such as learning a new skill, contacting others or sending care packages to a loved one.
More info: https://t.co/AAA2ZMer3q pic.twitter.com/LzrDGRV9CV

That testing regime is now set to expand to ‘hotspots’ in Sydney and Melbourne to chase community transmission.

Previously, testing was limited to people returning from overseas with symptoms.

But while some of the news is good, health experts insist Australia must not become complacent.

Three people in their 30s are on ventilators in intensive care wards in NSW hospitals and they did not have pre-existing conditions.

COVID-19 remains mysterious and there is much that doctors still don’t know about the virus.

“Those relatively young people don’t have risk factors, and that is an important point,” Professor Kelly said.

‘Early on, we were worried’: Australia tipped to release official COVID-19 modelling