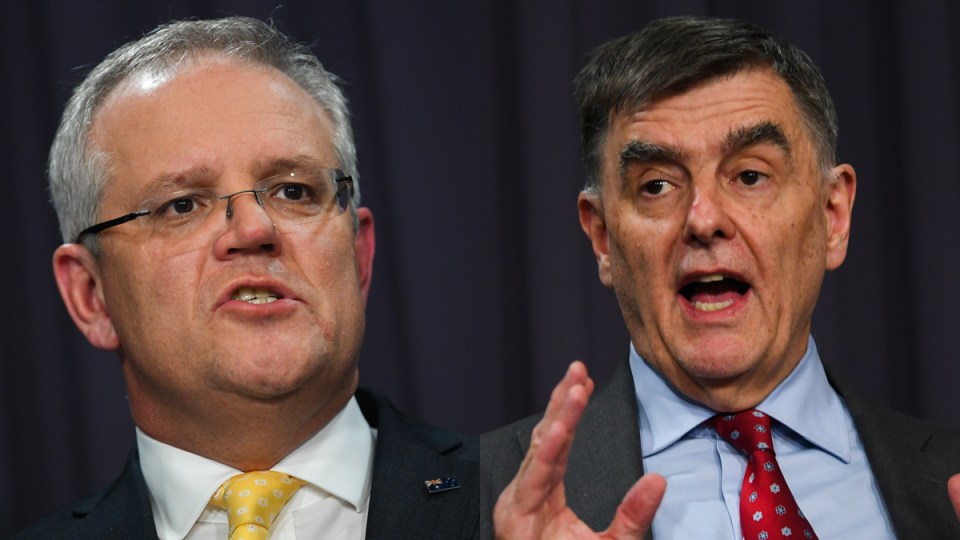 Weddings and funerals will be strictly limited in size, and brothels, nail salons, tattoo parlours and open house inspections shut down across Australia under draconian new laws to stop the spread of COVID-19.

The new bans, which were unveiled by Prime Minister Scott Morrison on Tuesday night, are set to throw thousands more Australians onto the long lines of unemployed workers now queuing up outside Centrelink offices.

But they will allow hairdressers to stay open for now – if they can cut, colour or blow-dry hair in just 30 minutes before customers are booted out the door.

The Prime Minister defended the arrangements as a desperate attempt to balance limiting the spread of the coronavirus with saving jobs.

Mr Morrison described the decisions he had been forced to make and the jobs lost as “heartbreaking events in our nation’s history”.

Under the new rules, brides and grooms will be forced to marry with just two wedding guests to witness the event.

The PM also claimed the ‘four-square-metre rule’ would have to be observed but did not stipulate if he meant between the bride and groom.

“Now, weddings can continue to be conducted where it is just the couple, the celebrant and the witnesses,” Mr Morrison said.

“No more than five people. And the four-square-metre rule has to be observed within the venue in which that is taking place.”

Funerals will also be subject to size limits that could see relatives banned from attending.

“No more than 10 persons observing the rules around the four-square-metre rule and the social distancing practices,” Mr Morrison said.

“This is not an easy decision.

“Some of the events that have been some of the major transmitting events, it has been exactly these types of events, particularly weddings.

“And that is why, regretfully, we have to be able to put these arrangements in place …  from midnight tomorrow night.”

Social distancing doesn’t mean losing contact with those you love. Stay connected with family and friends by phone, text, email, social media or video-chat.
Learn more about what social distancing is at https://t.co/eeaz4ShQ0m pic.twitter.com/MBNLCSawba

Australians are also officially banned from leaving the country under the new rules.

“Now, the numbers of Australians going overseas has reduced dramatically and there will be exceptions to these rules,” he said.

“… But still, it strikes me on those numbers that there are people defying that advice and still looking to go overseas on leisure travel.

“They can’t do it because when they come home, that’s when they put Australians at risk.

“I had hoped that would have been fully complied with.”

Food courts in shopping centres will be shut down unless they are selling takeaway.

Auctions and open house inspections will be banned across the nation.

The Prime Minister also confirmed that nail and waxing salons, tattoo parlours and beauty therapists will join cinemas, nightclubs, casinos, gambling and adult entertainment venues in being ordered to be shut down.

The Prime Minister’s office confirmed after the press conference that Mr Morrison’s reference to “adult entertainment” was a ban on strip clubs, sex clubs and brothels.

Indoor and outdoor play centres will also join community and recreation centres, health clubs, fitness centres, saunas and wellness centres in closing, yet fitness boot camps of up to 10 people will be allowed as long as it’s outside.

The laundry list of new regulations was attacked as too complicated by critics including cricketer Shane Warne, who said Australian should simply be in lockdown now as is the case in Britain.

Listening to the PM like everyone here in Aust & what I understood was.
“It’s essential. Unless it’s not. Then it’s essentially not essential. I can’t be clearer” Plus people can buy a new shirt at a shopping centre ? WTF? PM just had a shocker. Surely should be in lockdown now

“Listening to the PM like everyone here in Australia and what I understood was: ‘It’s essential. Unless it’s not. Then it’s essentially not essential I can’t be clearer’,” Warne tweeted.

“Plus people can buy a new shirt at a shopping centre? WTF? PM just had a shocker. Surely should be in lockdown now.”

“Stay at home unless it is absolutely necessary you go out,” Mr Morrison said.

“Going out for the basics, going out for an exercise, perhaps with your partner or family members, provided it’s a small group, that’s fine.”

“Schools, the medical advice on schools has not changed. It is safe to send your children to school,” he said.

“There has been discussions today between the Education Minister Dan Tehan and the education national unions, and I will be meeting with them tomorrow [Wednesday] to discuss a set of arrangements we would like to proceed with, that importantly keep schools open, that also will protect those teachers and other staff who are working in schools.

“So we can do this. We can work this out.

“Schools, we agree, across the country would need to reopen on the other side of the term break because it won’t be a holiday.

“They will reconvene after the term break and there will be a mixture of both distance learning and where parents choose to keep their children at home.”

“These measures are really draconian. We know that,” Professor Murphy said.

“But if we’re going to control community transmission, we have to stop the capacity of this virus from spreading from person to person.

“And I have said many times, it is a long haul and that is why we are keen to keep society functioning but keep society safe.”

The new rules also include: