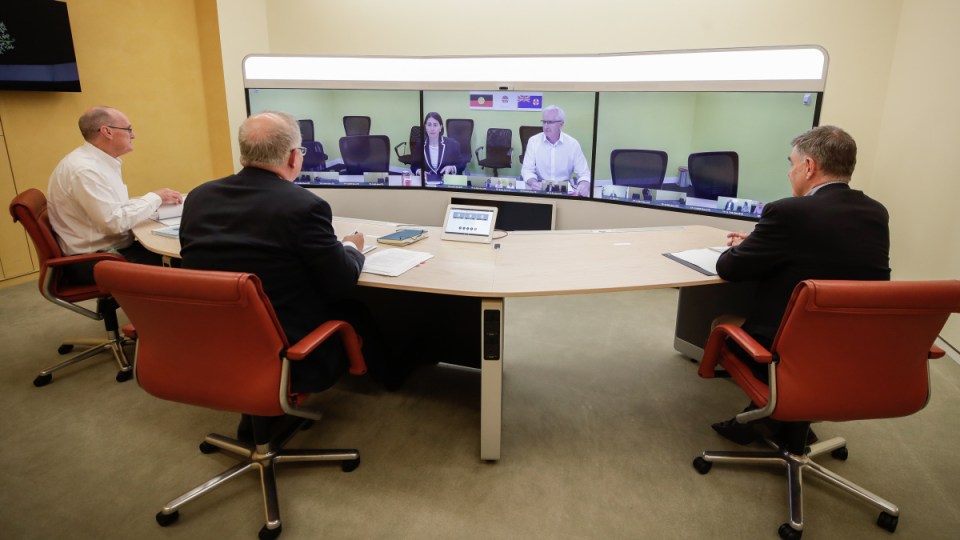 Pubs, clubs, gyms, and restaurants will close their doors in Australia from noon on Monday and could remain shut for six months, but the Prime Minister has insisted schools should remain open because there’s no medical advice that they close.

Despite schools in ACT and Victoria announcing extended school holidays on Sunday, Scott Morrison said there was an agreement in the national coronavirus cabinet from state premiers that schools will reopen – subject to medical advice – after the holidays.

But it was the PM’s comments on schools that caused confusion on Sunday night, with Facebook groups of worried parents around the country debating and trying to decipher the new rules.

“There has been no change to the advice, the health advice, in relation to schools,” Mr Morrison said.

“Children should go to school tomorrow.

Some important new restrictions tonight as we step up our fight against the #coronavirus.

From midday tomorrow (23 March), the National Cabinet has agreed to move to more widespread restrictions on social gatherings ➡️ https://t.co/YnslJhZ2Hc

“Health advice has been clear and they have remained open and this is important because I want to stress this, I do not want to see our children lose an entire year of their education.

“This is very serious. If you are a four-year-old child at preschool, you do not get your whole year back. You only get it once.

“In addition, schools will seek to provide learning at home in a distance learning framework, but you cannot be assured that that will come in place immediately.

On Sunday, Victoria, and the ACT announced they would prematurely end term one and have pupil-free days from Tuesday to allow schools to prepare for distance learning.

NSW Premier Gladys Berejiklian flagged that she would have more to say on the status on schools in her state by Monday morning.

The PM’s claim that schools should remain open until the end of the term appeared at odds with the announcements from states.

“What we will be doing though is allowing parents … to be able to keep their children at home where they choose to,” Mr Morrison said.

“But for all of those parents who wish to send their children to school, for education at the school, those schools will remain open.”

The comments prompted a rebuke from the ACT Education Minister Yvette Berry, who said the decision to close the ACT schools early on Tuesday for extended holidays won’t change.

“I don’t know why the PM suggested otherwise. Education will continue to be phased in for online/ distance learning,” Ms Berry said.

The decision the ACT Government has made is consistent with NSW and Vic and won’t change. I don’t know why the PM suggested otherwise. Education will continue to be phased in for on line/ distance learning.

Call me anytime you have my number. https://t.co/v9F3cQdKrY

Mr Morrison said that while Victoria had already taken the decision to end the term early, schools should reopen on the other side of the term break, subject to the health advice at that time.

“Parents who make the decision for the children to remain at home must take responsibility for those children,” Mr Morrison said.

“Those children staying at home, it is not an excuse for them to go down to the shopping centre or to go and congregate somewhere else or potentially put themselves in contact with the vulnerable and elderly population.

“If you choose to keep your child at home, you are responsible for the conduct and behaviour of your children.

“But is always the case, for any parent, but particularly in this case, it is important that they observe the strict social distancing arrangements that have been advised to the public.

“This will not be a holiday as it is normally known.

The Prime Minister implied he had been left with little choice to close pubs and clubs after images emerged of hundreds of beachgoers at Sydney’s Bondi Beach defying the public health advice to practise social distancing.

“The social distancing practices are not being observed as well as they should be,” he said.

“They are Stage I and they will be reviewed on a monthly basis but … once you start putting these sorts of arrangements in place we should have the expectation that they will remain in place for at least six months.

“If the health situation changes and enables us to reconsider those arrangements, then that can be reconsidered.”

Cinemas, casinos and nightclubs will close. Gyms and indoor sporting venues will also close their doors from noon.

“I am deeply regretful that those workers and those business owners who will be impacted by this decision will suffer the economic hardship that undoubtedly they will now have to face. That is a very, very regretful decision,” the PM said.

Can I take the kids interstate for the school holidays?

No. Some states including South Australia have shut their borders. The Prime Minister Scott Morrison said the medical advice is clear: Don’t do it. “If you were planning to go interstate, if you were going to far-flung places within the state. But even more closer to home.”

Can my kids go to school on Monday?

Yes. The PM said they should go to school. You can choose to keep them home, but the PM insists they must be supervised and not “roaming” around shopping centres. NSW, Victoria and the ACT have brought forward the school holidays but the PM wants schools to reopen after the break. Schools are looking at distance education options, but the plan is to keep them open for essential services workers.

Can I go to the shops?

Yes. Supermarkets, shopping centres and even hairdressers will remain open for business. “You can go to the shops and do all of those sorts of things, provided the arrangements are in place where those places are open for business,” the Prime Minister said.

Can I go for a walk?

Yes. “If you’re not ill and if you’re not in self-isolation, then you can obviously get about your life in that way. But when it comes to piling all the kids in the car and taking them four hours away, or getting on a plane and flying to the other side of the country, then no – we’re saying that should not be done,” Mr Morrison said.

Can I go to the pub or the gym?

Not from noon on Monday. The ban will be reviewed on a monthly basis, but the PM said it could last for up to six months.