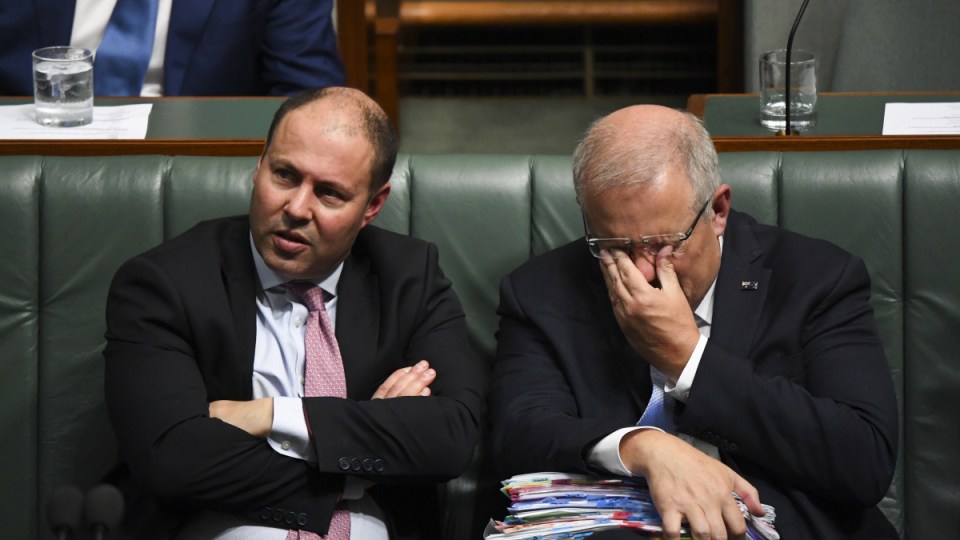 I almost feel sorry for Josh Frydenberg. A second-rate Treasurer before the COVID-19 crisis, he is now facing a challenge that could beat the very best.

But you can’t feel sorry for someone who has already given up, who represents a government that has signalled it won’t try to stop Australia suffering a recession, that is prepared to watch unemployment rise, people lose their savings, and businesses go broke because of an ideological/political obsession.

Or maybe it’s because this government’s leaders are not very bright.

Based on everything the government has said, indicated and leaked so far, maybe they just can’t grasp the extent of the challenge and are being overwhelmed by the unfolding problem.

Maybe their vision can’t extend beyond rorting government grants programs for their own political advantage.

No confidence means greater public caution, less willingness to spend, and more to save.

What the government and much of the commentary so far doesn’t get is that our economy is facing both a supply shock and a demand shock.

A sudden large demand shock is difficult to handle when the desire to spend is weak, but Australia’s GFC performance showed how it can be successfully fought.

A sudden large supply shock is more difficult as the problem becomes the inability to obtain stuff to buy and sell, the stuff required for manufacturing, building and domestic consumption.

Dr Andrew Charlton was Kevin Rudd’s senior economic adviser when the GFC hit and Australia’s senior representative at the subsequent G20 Leaders Summits during the GFC.

He has written that a 2008-style “cash splash” won’t save us from a supply shock.

But even the esteemed Dr Charlton seems to miss the crucial point: It looks like we’re facing both.

To explain the double-whammy, consider for a moment a common (and uninformed) criticism of our GFC defence, the claim that people who received the $900 cheques “wasted it” by buying flat-screen TVs and drinks at the pub and putting it through the pokies.

They didn’t waste it.

They did what they were meant to do – spend it to keep the economy ticking over when fear of the recession sweeping the rest of the world was in danger of creating one here.

Retail was Australia’s biggest single employer at the time.

If the tills had stopped ringing, unemployment would have shot quickly higher with the danger of snowballing once that crucial confidence factor was damaged.

Hospitality – the people pouring the drinks, cooking the meals, washing the glasses and servicing the poker machines – is particularly prey to marginal employment.

Jobs can be quickly and easily lost.

The feared supply shock is that there won’t be flat-screen TVs available for sale if punters want to buy them, or parts available here for our manufacturers and builders.

The simultaneous demand shock comes from the next stage of the coronavirus’ spread – when people avoid crowds, cancel conferences and parties and sporting events and stop going to the pub.

You don’t know who’s been pushing that pokie’s buttons.

It’s hard to stimulate spending in pubs and clubs and shopping malls if people won’t visit them.

And, for the umpteenth time, consumption was already weak, January retail sales miserable.

We’re already seeing the start of the demand shock from the dive in foreign tourism.

It’s not just the loss of tourists from the three (so far) specifically banned countries – trips are being cancelled and postponed right around the world to and from everywhere.

The #ScottyfromMarketing promise of extra advertising dollars for Australian tourism to counteract the bad international bushfire publicity comes to nothing when people stop getting on planes.

Dr Kennedy’s wan effort in Senate estimates included the expectation that COVID-19 would knock “at least” 0.5 per cent off March quarter GDP growth, but: “This preliminary estimate takes into account the direct impacts on tourism, international education exports and some exchange rate effects. It does not include supply chain disruptions or other potential broader impacts.”

The immediate “direct” tourism impact estimates the value of the foreign tourists no longer coming.

The direct impacts spread to the indirect very quickly.

Sure, the number of foreign tourists visiting our restaurants plunges quickly, but, indirectly, the tour bus operator suddenly without shifts tightens his belt and doesn’t visit his local restaurant either.

The loss of inbound tourists is obvious, the crash in outbound tourism less so.

Anecdotally, bookings for Australians to travel overseas are down more than 30 per cent and falling fast.

Airlines are rapidly cancelling flights. Air crew only paid when they’re flying will have less money to spend, so won’t.

Flight Centre has advised its staff that it’s a good time for them to take holidays, long service leave, leave without pay, or perhaps try a four-day week.

A little over a week ago, the company advised the stockmarket it expected its pre-tax profit to be down by between $50 million and $60 million in the current half year.

My guess is that it will be fortunate if it’s only down by that much.

It’s bemusing to be on cruise ship companies’ mailing lists, watching the special offers and discounts become steadily more generous, or desperate, depending on which way you look at it.

Some of the loss of foreign travel will be recouped by domestic holidaying, but only some and not so much if/when we move to the next phase of avoiding crowds.

The Insurance Council of Australia cancelled its annual forum that was to be held this week.

That’s the ICA, which has lots of actuaries who take what scientists say seriously, be it on climate change or coronavirus.

That’s just one conference that no longer will provide all those casual shifts for staff at the dinner and drinks sessions, no coffee cart during conference breaks, hotel food orders cancelled, and cancelled accommodation.

And never mind the Tokyo Olympics, our local sporting events are under threat.

The Irish rugby team is meant to tour in July.

We’re either going to be allowed or want to cram into stadiums in winter when virus transmissions of all sorts peak?

All the workers on casual terms in those stadiums on match days – no game, no pay, no spend.

So far, the copious speculation has been about the loss of income for people self-isolating, the nearly one-in-three Australians who don’t have access to sick pay.

How long does it go on for? Nobody knows.

I was asked to speak at a conference in October with international speakers. It has been cancelled.

Dr Kennedy was only game to speculate very cautiously and conservatively about the March quarter, the one that’s nearly over, and even then he wouldn’t try a figure for the supply shock side.

Whatever the potency of the disease, the domestic economic crisis hasn’t begun to get serious yet.

If COVID-19 has taken “at least” 0.5 per cent off March quarter GDP growth, it’s a reasonable bet it will take the same off the June quarter.

And then there’s minus 0.2 per cent for the bushfire effect.

Remember our economy only grew by 0.5 per cent in the December quarter and was actually weaker than that soft figure appears.

So if COVID-19 is knocking at least 1 per cent point off our already-soft GDP growth in the six months to June 30 and quite possibly depress our economy for longer than that, is the government considering stimulus of the order of 1 per cent of GDP – about $20 billion?

Nothing like that, from all indications. The government will not try to avoid a recession.

Worryingly, the government is still trying to fool itself about the pre-virus economy.

Dr Kennedy told the senators our 2019 economic growth was “a solid result given headwinds from the weaker global economy in 2019”.

Note that he used the present tense in that statement.

He should have used the past tense regarding income tax cuts and labour market strength and – to put it kindly – he apparently has absolutely no idea at all about wages growth.

Of course, we don’t yet know what stimulus Josh Frydenberg will announce later this week.

We could be pleasantly surprised, but a few days out, there has been no reason to think so.

How good is Josh Frydenberg? We’ll find out this week.