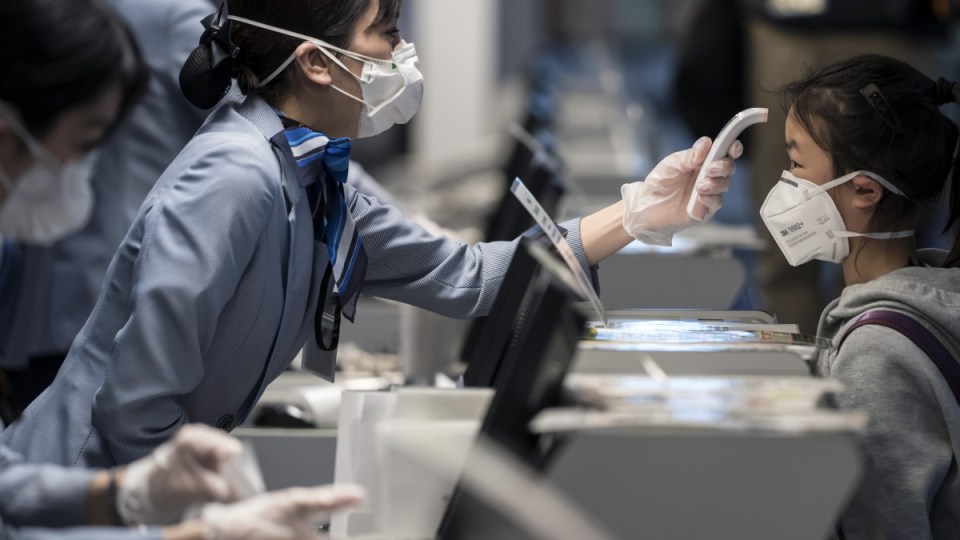 Air travel across the world has been restricted because of the outbreak. Photo: Getty

The impact of coronavirus threat isn’t just eating up the budget surplus, it will cost the tourism industry $4 billion and up to 133,200 jobs, new data shows.

The outbreak will mean 1.8 million fewer tourists on our shores between January and June, with the monthly hit to the industry around $2 billion, modelling from the Tourism and Transport Forum (TTF) reveals.

The jaw-dropping estimate comes after the Australian Tourism Export Council revealed in January that the number of bookings was already down by 10 to 20 per cent because of the bushfires – meaning the nation could easily loose more than $6.5 billion by the end of June.

In short, it’s a bad time for tourism.

By comparing the spread of coronavirus to the SARS outbreak, the TTF estimated between 99,000 and 133,200 people in the tourism industry could lose their jobs.

And TTF CEO Margy Osmond said it would only get worse.

“What we are facing is a contracted visitor economy with significant losses across international visitation, tourism spend and employment in 2020 and beyond,” Ms Osmond said.

“When you look at SARS, there were 29 countries affected over nine months. Our current situation is 29 countries over eight weeks and counting. Not to mention 79,000 cases-plus for coronavirus, compared to 8098 for SARS,” she added.

Ms Osmond said while the COVID-19 outbreak was yet to be classified as a pandemic, the [federal] Treasurer had already indicated the economic impact will be greater than the bushfires and it will play-out more broadly across the Australian economy.

“What is unique about tourism is that we have been directly in the firing line for both crises,” she said.

The affects of the bushfires, and now tightening travel bans, are being felt across the country.

On the Gold Coast hinterland Robyn Fortescue, who runs a bed and breakfast overlooking the Scenic Rim and the Great Dividing Range, told The New Daily her business was still feeling the fallout from the bushfire season.

“We don’t know what the long term effects of all this are going to be. It’s very new territory,” she said.

“We’re pretty quiet, but I generally find February is a quieter month so it’s hard to tell… Our forward bookings are not great.”

After the fires, Ms Fortescue said, climate change had become a concern for many in the local tourism industry.

“We do have concerns …t extremes in temperature are not healthy for tourism obviously,” she said.

“People come here for the weather as much as the ambience. If they’re surrounded by smoke or checking the weather constantly, it’s not a healthy thing in the industry.”

Desperate to cushion some of the blow from the two events, Tourism Australia launched a $40 million campaign, ‘There’s still nothing like Australia’ to lure back British and Asian tourists.

Federal Tourism Minister Simon Birmingham said the campaign would help deal with the “double whammy” of bushfires and the impact of the virus.

“This targeted campaign activity in some of our key markets is about getting the message out there quickly that Australia is open for business and is a still hugely popular and safe destination to visit that offers amazing experiences,” Senator Birmingham said.

But the message might soon get overshadowed by news out of Queensland, where Australia’s premier tourist destination is at risk of a wide-spread outbreak of coral bleaching.

A concerning cocktail of clear skies, weak tides and above-average ocean temperatures are coming together on the Great Barrier Reef, raising concerns it may be hit with a mass bleaching event in the coming weeks.

Macquarie University’s Professor Lesley Hughes has studied the impact of climate change on the tourism industry and said a major bleaching event following hot on the heels of the fires and coronavirus would devastate the industry.

“A lot of tourists aren’t here because of the coronavirus. But thinking more long term, if we do get a bad bleaching event this season it’s simply adding to the feeling international and nationally that the Reef is done for,” she said.

Although the coronavirus has meant fewer tourists on our beaches, the on-going concern climate change-driven disasters and global perceptions of Australia’s natural wonders.

“Nobody visits Australia to see the Opera House,” Professor Hughes said. “If you look at the top reasons tourists come it’s the Reef, our beaches, our wildlife.

“The many photos of burnt koalas, I think that will have an impact. A lot of tourism is driven by perception as well as actuality. So that’s important.”

Climate Councillor Professor Will Steffen agreed, saying this season’s fires are just a taste of things to come.

“The tourism industry will definitely be worse in the future,” he said.

“There’s a big lag built into the climate system. If we could cut emissions to zero tomorrow, we would still get rising temperatures for a couple of decades.

‘In the firing line’: Over 100,000 tourism jobs to be lost because of coronavirus