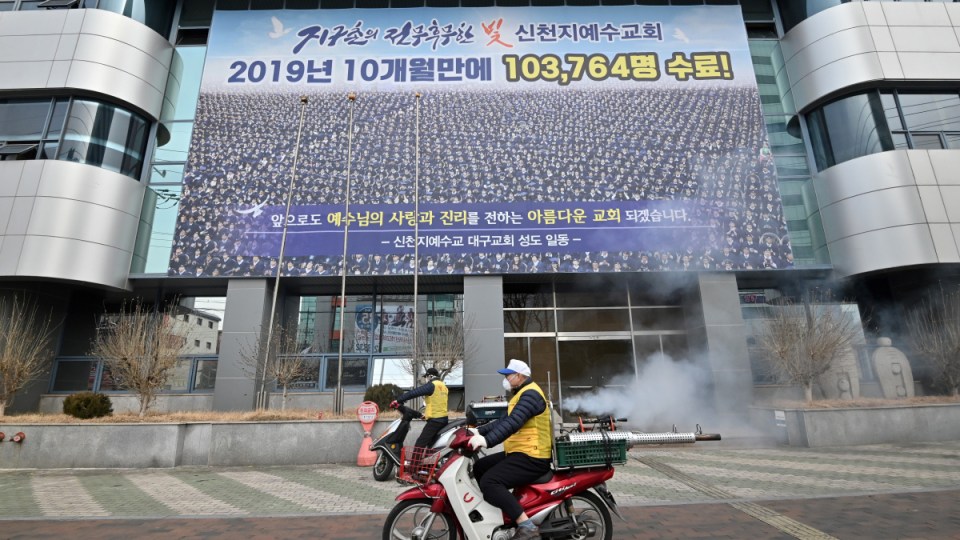 A devout follower of a cult-like Christian sect has been linked to a rapid spike of COVID-19 in South Korea after reportedly sneaking out of hospital to attend religious services.

South Korean authorities have confirmed 120 new cases of the disease, more than 70 of them traced back to a branch of Shincheonji Church of Jesus, the Temple of the Tabernacle of the Testimony, in the city of Daegu.

It comes as Japan’s health ministry confirmed a man in his 80s who was previously on board the Diamond Princess cruise ship had died of pneumonia.

It is unclear whether the Japanese man, who had a pre-existing chronic disease, was infected with the coronavirus or whether he was a passenger or crew member.

He is, however, the third person on the coronavirus-hit cruise ship to have died.

Meanwhile, in South Korea, details are emerging about the movements of people who are part of a secretive church and who have been linked to the virus spread. The church’s worshippers believe founder Lee Man-hee, 88, is the second coming of Christ, and that he will ultimately decide who will be saved on Judgment Day.

Despite its 200,000 followers in South Korea and thousands more overseas, the group is widely recognised as a cult.

One follower, a 61-year-old South Korean woman dubbed ‘Patient 31’, has been identified as a possible “super-spreader” of the deadly coronavirus after she attended at least four services in Daegu this month despite feeling sick.

Patient 31 had not travelled overseas in recent months so she assumed her symptoms were the common cold, Shincheonji church officials said.

Now, it has emerged the woman might have contracted COVID-19 during a short stay in hospital after a minor car crash.

On her fourth day in hospital, Patient 31 reportedly developed a fever, but refused to get checked for COVID-19 because she hadn’t travelled abroad nor been in contact with anyone contaminated.

She was finally tested on Monday, and on Tuesday she received a positive result.

But during that time, Patient 31 had reportedly sneaked out of hospital at least four times to attend hours-long church services that attracted up to 1000 people.

At Shincheonji Church meetings, worshippers are banned from wearing glasses or face masks, and must sit tightly together on the floor, reported The New York Times.

The Shincheonji church in Daegu has since become the biggest cluster of viral infections in the country, said the Korea Centre for Disease Control and Prevention.

The spike has brought the total number of infections in South Korea to 556.

To try to stop the disease spreading further, the mayor of Daegu has urged its 2.5 million people to avoid going outside and to wear masks at all times.

The Shincheonji church has reportedly closed its 74 branches and told its congregation to watch religious services online instead.

In a message to his worshippers, Mr Lee encouraged members to adhere to government instructions and avoid gathering in groups.

“This disease outbreak is the work of the devil, which is hellbent on stopping the rapid growth of the Shincheonji,” he wrote.

But it has been difficult for authorities to track them down because worshippers have been taught to keep their religious activities secret and are reluctant to come forward.

“Shincheonji members know of their bad image and they usually hide their affiliation from non-church members, even from their parents,” Pastor Hwang Eui-jong told The New York Times.

“No wonder many of them are unreachable. They must be huddled together somewhere, praying that this will eventually go away.”

The South Korean government has responded to the crisis by shutting thousands of childcare centres, nursing homes and community hubs.

Daegu isn’t the only known hot spot for the deadly disease.

So far, four of the nation’s fatalities from COVID-19 have been linked to a hospital in the south-eastern city of Cheongdo, where 16 patients and medical staff have tested positive.

Some church members are believed to have attended a funeral for Mr Lee’s brother in Cheongdo earlier this month.

Patient 31 did not visit the hospital or attend the funeral, but she did use a public bathhouse while in Cheongdo, reported South Korea’s Newsis News Agency.