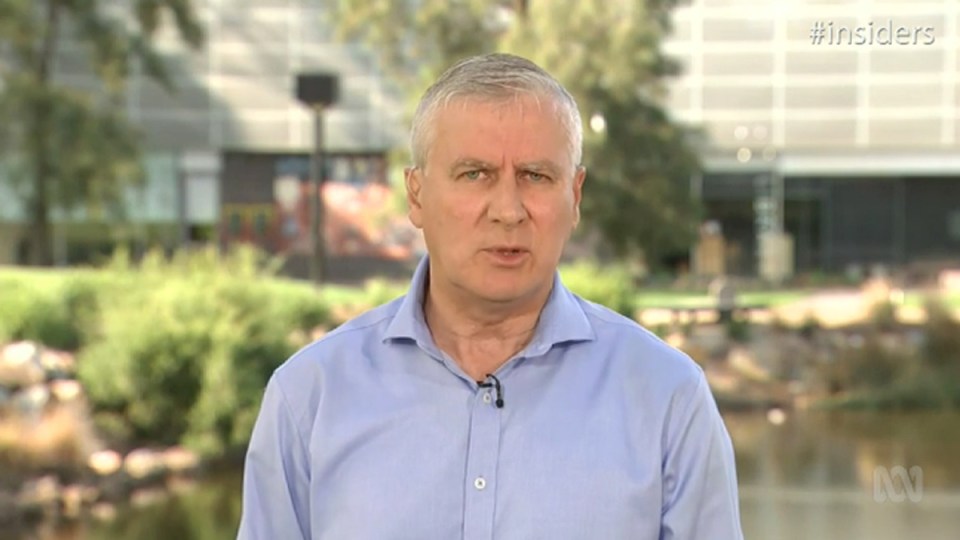 Sometimes the truth is made bleedingly obvious by their obfuscation and deflections, by what they won’t or can’t say.

In the case of the Deputy Prime Minister and leader of the National Party, Michael McCormack, the more he didn’t answer questions on Sunday about yet another sports rort, the more obvious it became that another very large bag of taxpayers money was being directed to where Scott Morrison’s election campaign team wanted it for purely political purposes.

Logic says that if a $150 million program specifically budgeted for “regional development”, for stakeholders in “regional and remote communities”, overwhelmingly ends up being spent in cities, there’s something dodgy going on.

When that $150 million program for regional development is being administered by the leader of the National Party and National Party seats receive less than 10 per cent of the money, logic says that money is not allocated by a National Party member.

A bull might be kept away from cows by maintaining 4000 volts on an electric fence line, but you’d need something much hotter to keep beleaguered National MPs away from a pot of cash for regional infrastructure in the run up to a tough election.

Very simple logic says the carve up of that $150 million “female facilities and water safety program” slush fund was firmly in the hands of the Prime Minister’s campaign team, not Michael McCormack.

Party political hacks, not the government.

That logic was backed by Mr McCormack floundering and foundering under David Speers questioning on the ABC’s Insiders program.

Speers: “ls less than 10 per cent of the money fair and equitable?”

McCormack: “Well, what we want to make sure is that there is this sort of funding and you can do it when you’ve got a balanced economy, when you have an economy working towards …”

Speers: “No, I’m asking whether less than 10 per cent for these National Party seats is fair?”

McCormack: ”Well, I’m sure in future rounds that regional Australia will get more than just 10 per cent.”

There was more, but you get the point.

Or you could claim that Sydney and Melbourne are “regions” too.

Once you start counting rorted programs, it’s difficult to know where to stop.

I did at $1.1 billion in the past financial year simply because it’s a number that matches the ABC’s annual budget.

On that scale – and compared with the greater challenges facing Australia right now – the $102.5 million Adventures of Bridget McKenzie is small beer.

But as a helpful soul pointed out, the final straw that breaks the camel’s back can be very light indeed.

And, as so often the case, the cover-up ends up being more damaging than the original break in.

The more Scott Morrison and his ministers have attempted to defend the indefensible, to deflect, obfuscate and deny, the worse they look as each fib comes undone.

Making Senator McKenzie the temporary fall dame over a technicality has fooled nobody.

Rather than cauterise the bleeding, that small offering has cost the credibility of the head of the Prime Minister’s department.

Philip Gaetjens was in a bad place to start with, being a long-serving political staffer – chief of staff for Peter Costello and Scott Morrison – suddenly supposed to turn disinterested judge as departmental secretary.

It was poor of Mr Morrison to put him in that position, but the Prime Minister no doubt had his reasons.

A former head of the Department of Prime Minister and Cabinet, Michael Keating, has destroyed Mr Morrison’s excuse for not releasing Mr Gaetjens’ report.

The exercise has left anyone interested in the matter with a simple question: Who has more credibility, the Auditor-General or the Prime Minister and his departmental secretary?

The Auditor-General wins hands down.

Such is the climate of distrust that the idea that there is no official Gaetjens report gets traction on social media, or, like Barnaby Joyce’s drought report, that it was “phoned in”.

For those of you playing along at home, notice how in his written Senate submission Phil Gaetjens repeatedly refers to his "advice" to the PM.

The reference to his "advice" appears 3 times.

He never uses the phrases, "the report" or " my report"

That's because there isn't one. https://t.co/CLSMVeLayJ

With such a clumsy, ongoing embarrassment of a cover up, logic asks another question: What greater potential problem lurks higher up for the government?

With the Prime Minister already wounded, the involvement of the Cabinet Expenditure Review Committee in scamming taxpayers comes to mind.

That is the government’s entire leadership team.

It is the government’s fervent hope that people will get bored with the rorts story.

The coronavirus has to have a silver lining for someone other than face mask manufacturers.

It will show up at the ABC, The Guardian and The New Daily and that’s it.

Admittedly, the hapless Mr McCormack provided plenty of other fodder via National leadership squabbles and dodging and weaving over climate change.

But if the pack falls away from covering the grants rorts, I fear a bigger story will be missed than who happens to be leader of the National Party on any given day.