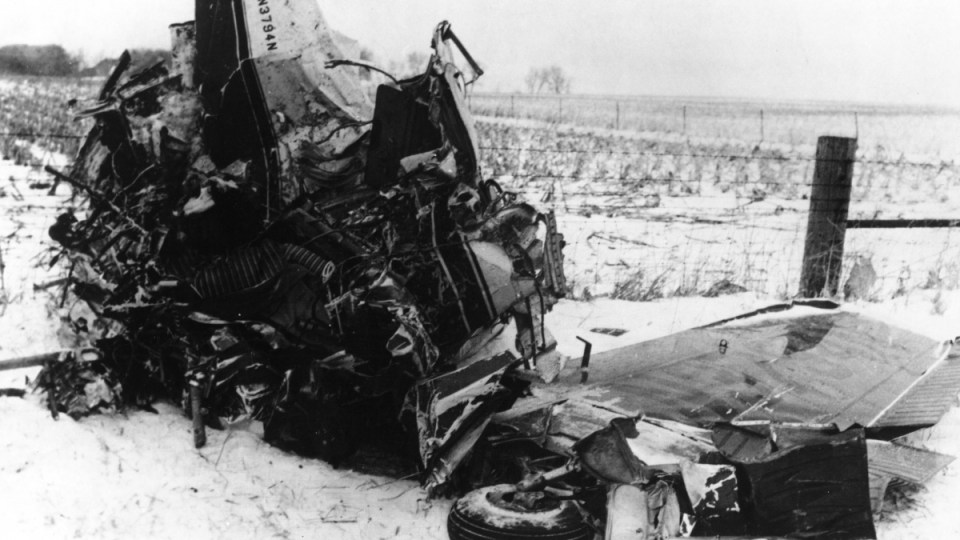 The wreckage of the plane crash that killed rock stars Buddy Holly, Ritchie Valens and The Big Bopper.

The news of Kobe Bryant’s death in a horrific helicopter crash last week rocked across the world.

Sixty one years ago, music fans grappled with a similar hollow feeling after three rock-and-roll icons and their pilot were killed in the US midwest state of Iowa when their plane crashed.

The deaths of Buddy Holly, Ritchie Valens and “The Big Bopper” JP Richardson were immortalised in Don McLean’s 1971 song American Pie and the date, February 3, became known as “the day the music died”.

On the evening of February 2, the three stars had arrived at Iowa’s resort town of Clear Lake to perform two sold-out shows at the ballroom.

That night, they gave more than 1000 fans a show they would never forget.

At the time, Holly’s hit That’ll be the day was No.1 on the US charts.

Six months earlier he had celebrated his 22nd birthday and married Maria Elena Santiago, who was pregnant with their first child.

When the performance was over, the three musicians rushed to the airport to catch a chartered plane to Fargo in North Dakota, where Holly had planned to rest and finally do some washing.

Others on the tour had given up their seats.

Holly’s bass player Waylon Jennings had offered his seat to Richardson, who was sick. He later said the decision haunted him till his death in 2002.

Rock icon Dion was also on the tour – he allegedly gave up his seat after hearing the $36 per-person price tag.

Guitarist Tommy Allsup flipped a coin with Valens to see who would have to take the bus and who would get on the plane.

In a 1987 interview, Allsup recalled the coin toss backstage after playing a concert.

“A couple of people were standing there,” he said.

“I flipped it. [Valens] called ‘heads’. He got his stuff off the bus.

“I know my dad has talked about that many times and knew that he was very lucky to be here. It could have been the other way around.”

The night was cold, with light snow falling on the runway. Just after midnight, they took off.

The four flew into a storm, and the young pilot Roger Peterson lost control of the plane. He dipped low, a wing hit the ground and sent the plane tumbling across a paddock.

Before dawn an alert was issued for the missing plane and at 9am the next morning the owner of Dwyer Aviation flew his plane and spotted the crash site. There were no survivors.

The young voice of the hit song Peggy Sue was gone forever.

Mrs Santiago-Holly refused to attend the funeral, and in the days following suffered a miscarriage.

Afterwards, she told the Avalanche-Journal: “In a way, I blame myself. I was not feeling well when he left. I was two weeks pregnant, and I wanted Buddy to stay with me, but he had scheduled that tour.

“It was the only time I wasn’t with him. And I blame myself because I know that, if only I had gone along, Buddy never would have gotten into that airplane.”

Today a small marker identifies where their bodies were found and a large pair of glasses, modelled on the ones Holly wore, are on the road nearby.

More than 60 years later, fans from across the world still travel to the Iowa paddock to pay their respects for the iconic musicians.

On this day: The plane crash that claimed three rock icons