Khadija lives in an African country most westerners would never have heard of, and even less could pinpoint on a map.

The nine-year-old’s father is dead, killed in violence that has marred the Central African Republic and her mother struggles to make ends meet by working on a farm.

It’s unsafe, conflict is common, and the consequences of violence are everywhere.

When they get desperate for food, the child takes her undernourished eight-month-old sister across the border to Chad, where she can get some help from aid agencies.

“We can eat only once a day – usually we eat rice or millet,” Fatime said.

“During the rainy season, we always try to grow some vegetables, but it is never enough for all of us.

“I know it will have effects on the children’s development. But what can we do?”

Khadija’s story is not one many have heard of, but a lot have come to expect from the continent.

Years of conflict have taken their toll on the Central African Republic’s water supply and diminished its agriculture output.

Consequently, 1.8 million people – 41 per cent of the population – struggle to eat every day.

There’s just not enough food to go around.

Her story is one of the many shared by aid agency CARE in its Suffering in Silence report released on Tuesday, which tables the humanitarian crises we paid the least attention to in 2019.

By looking at more than 2.4 million articles about the 40 crises that affected more than a million people, they revealed the top 10 issues that received the least media coverage. 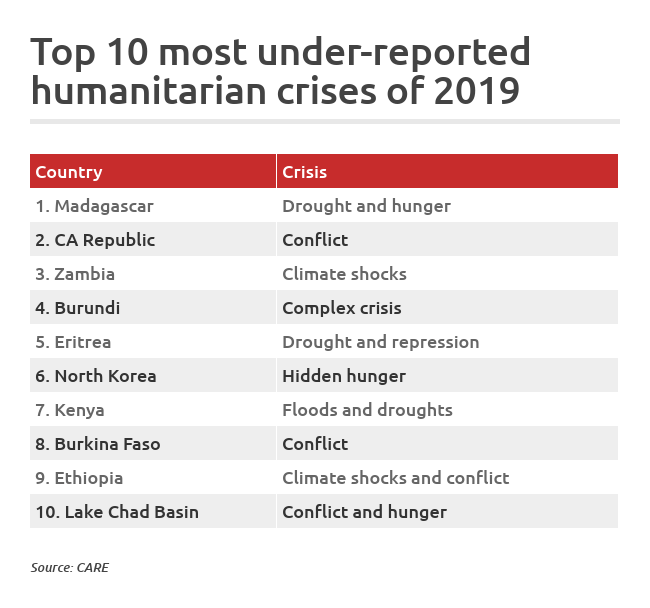 The report found that nine of the 10 most under-reported humanitarian crises of 2019 are in Africa – many of which have been caused or worsened by climate change.

The other was in North Korea.

Madagascar, a country that conjures images of the DreamWorks animation and not the severe drought that has crippled the country, was the least-reported major humanitarian crisis of 2019, with only 612 articles written about it.

Slim coverage compared to the 425,000 written about Syria – the most covered crisis.

From one extreme to the other, the country has suffered severe flooding over the past two days, which have received limited media coverage.

Rachel Routley, who is part of CARE Australia’s Emergency Response Unit, said these stories don’t get reported because of a complex cocktail of factors.

“I think one part of the reason is they’re long-drawn-out crises which don’t get people attention. If it’s an earthquake or a tsunami, it’s a distinct event. So it can be hard to keep people interested,” she said.

“I think the media has a tendency to cover the crises with the most political relevance to western security.

“Nine out of 10 are happening in Africa. I think there’s sometimes a simplified misconception that all of Africa is poor and in crisis.

“That’s not the case, but it means when there is hunger or conflict, it doesn’t make it interesting.”

Other major factors adding to the lack of coverage, Ms Routley said, are restrictions on media freedom within the countries and the cost of international newsrooms deploying journalists in those regions.

“It is dangerous and expensive for journalists to cover humanitarian crises in Africa and North Korea,” she said.

“News editors will weigh up the possibilities of assigning international correspondents to dangerous territories.

“Foreign correspondent work is potentially dangerous and expensive and, consequently, the story assignments are carefully planned, based on the interests of readers.”

The human cost of the climate crisis

CARE Australia’s CEO Peter Walton said most of the disasters on the list were longer and more severe because of climate change.

“In many countries, climate change is making a constant state of crisis the new norm, often exacerbating other challenges. Sadly, Australia has experienced this too in recent months,” Mr Walton said.

“Most of the countries on this list are also affected by violent conflicts, which can be fuelled by dwindling natural resources or the impacts of a changing climate.”

The report showed that without drastic action on climate change the number of people in need of humanitarian aid will grow to 200 million by 2050.

“What we’re facing now is unprecedented,” she said.

“The risks that are evolving are putting communities’ livelihoods and lives at risk. Their lives are vulnerable.

“We cannot rely on what we have been doing.

“We need to do things differently. We’re in interesting times and I think we need to work together.”

Last year’s report offered a clear path out of the doomed prediction.

“While there is a clear cost of doing nothing, there is also a chance to do something,” the report said.

“Stronger buildings, more resilient infrastructure, and dedicated infrastructures like dikes and pumping stations can protect people and economies and reduce the likelihood of a climate hazard
becoming a climate disaster.”

Body found in Victorian creek, amid further flood warnings
‘Horrific’: Mother to be charged over motorway stabbing
Australia’s Cambage takes break from WNBA
Iran denies attack on Salman Rushdie
Giuliani targeted in election criminal probe
No Kyrgios in Australia’s Davis Cup charge
Another heatwave on the way: Here’s when it will hit your place
Today's Stories