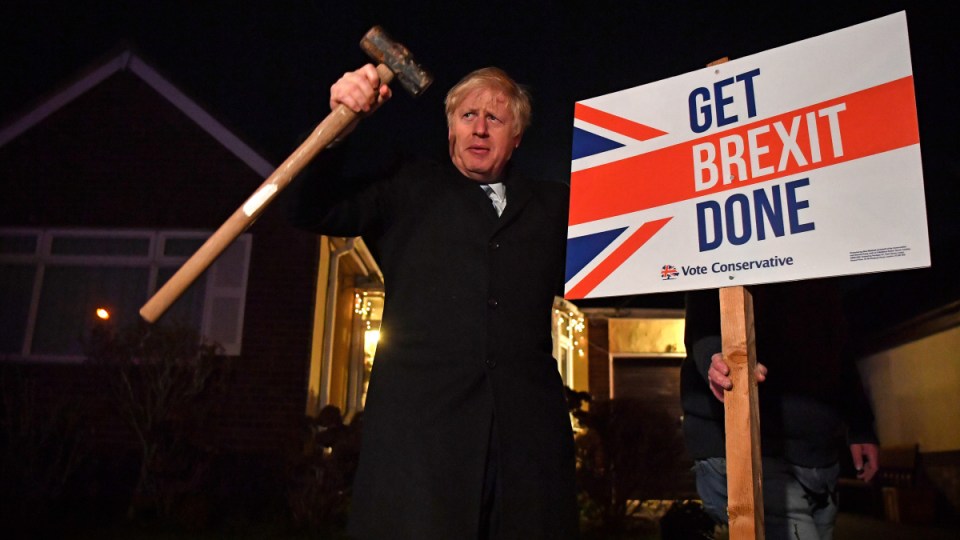 PM Boris Johnson vowed to lead the UK out of the EU, deal or no deal. Photo: Getty

If the opinion polls were anything to go by – and in Australia we know not to completely trust their predictions – Boris Johnson will find out this week that he can remain as Britain’s prime minister and finally “get Brexit done”.

But as the public is preparing to cast a vote on Thursday, the race looks to be tightening.

Now the PM’s latest gaffe has Britons wondering if he may really be losing his cool on election eve.

On the final day of campaigning, Mr Johnson appeared to have hidden inside a milk fridge in a bid to dodge questions from journalist Piers Morgan’s show. Footage also appeared to show the leader’s press secretary mouthing a profanity at the reporter.

As inevitable as a prime ministerial bad hair day, social media was soon alight with #Fridgegate memes. The day before, Mr Johnson was a social media star again – or the butt of jokes – over his election ad inspired by the film Love, Actually.

Astonishing scenes. Boris Johnson's press secretary just told a @GMB reporter to “fuck off”. Then Johnson went and *hid in a fridge* to avoid being interviewed. #GE2019 pic.twitter.com/tvNk2X0wYb

But, of course, that tiff was just a distraction from the main battle. Back on the frontline, it looked like the Labour Party, headed by Jeremy Corbyn, may still be in the running – despite earlier predictions Mr Johnson would secure an easy victory.

YouGov, which accurately predicted the outcome of the last election two years ago, has cut its forecast for Mr Johnson’s likely parliamentary majority by more than half to 28 seats. Two weeks ago it had forecast a majority of 68.

Possible outcomes from Thursday’s poll range from a landslide victory for Mr Johnson to a hung parliament with no party in control, YouGov said.

The December 12 election has been described by all parties as Britain’s most important in memory, with Mr Johnson calling for a big majority so he can swiftly pull Britain out of the EU next month.

The main opposition Labour Party promises a new referendum on Brexit as well as a re-nationalisation of utilities and railroads in its most left-wing platform for decades.

Ms Johnson, the face of the Leave campaign in the 2016 referendum, said of the contest “it could not be tighter” when asked about the opinion polls on Wednesday. He was out delivering milk to voters before sunrise.

In a last-minute pitch for votes, both Mr Johnson and Mr Corbyn were touring the country.

Mr Corbyn called on voters to reject the politics of despair and division he said the Conservatives had sown and urged Britons to vote for justice and equality.

Sterling fell sharply immediately after the poll, hitting as low as $US1.31 ($A1.91), a drop of more than half a cent in Asian trading.

An Opinium poll showed Johnson’s lead over Labour had narrowed to 12 percentage points from 15.