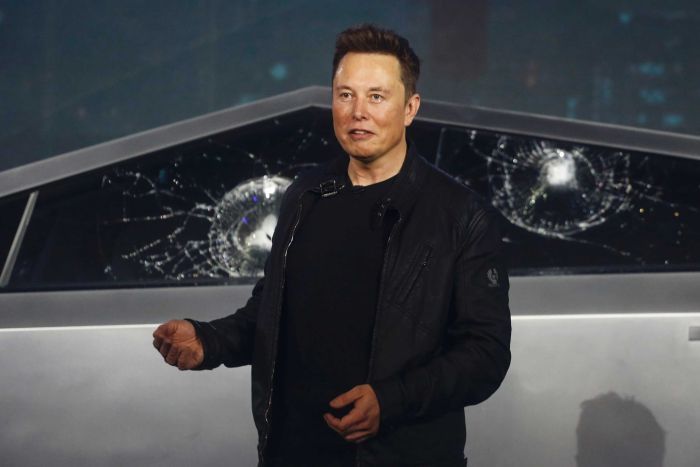 Would you trade your ute for a Cybertruck? Elon Musk hopes so.

The founder of electric carmaker Tesla has unveiled its new ute, which boasts a stainless steel body and “armour glass windows”.

But the armoured glass window cracked like a spider web when hit with a metal ball during a demonstration.

“Oh my f***ing God. Well, maybe that was a little too hard,” joked Mr Musk of the throw.

The ball was then thrown at another window, which cracked the same way.

“It didn’t go through,” Mr Musk said with a chuckle.

But a sledgehammer demonstration did not end the same way. A hefty swing that was shown to bash in a typical door did not dent the Cybertruck’s doors.

The six-seater vehicle marks the first foray by Tesla, whose Model 3 sedan is the world’s top-selling battery electric car, into utes — a market dominated in the United States by the Ford F-150, along with models by General Motors and Chrysler.

“We need sustainable energy now. If we don’t have a pickup truck, we can’t solve it,” Mr Musk said.

“The top three selling vehicles in America are pickup trucks. To solve sustainable energy, we have to have a pickup truck.”

Its starting price will be US$39,900 ($58,800), less expensive than initially flagged, and is already available for pre-order before production starts in late 2021.

“Cybertruck is designed to have the utility of a truck and the performance of a sports car,” Tesla said in a statement.

Mr Musk earlier tweeted the design was partly influenced by the Lotus Esprit sportscar that doubled as a submarine in the 1970s James Bond film “The Spy Who Loved Me”.

The Cybertruck drew mixed responses on social media and from industry experts, with many doubting its widespread appeal.

“I just watched Tesla release the #cybertruck and honestly? My life feels complete,” wrote one punter.

Matt DeLorenzo, senior executive editor at automotive research company Kelley Blue Book wrote that “it will be a niche product at best and poses no threat in the pickup market as we know it today”.

“‘It’ll grow on you,’ my mum told me when I didn’t like broccoli as a kid,” wrote Forbes tech columnist John Koetsier.

“Perhaps Cybertruck will grow on me. But I doubt it.”

Mr Musk — who faces a defamation lawsuit for calling a British caver a paedophile — told Recode last year that “I actually don’t know if a lot of people will buy this pickup truck or not, but I don’t care”.

It was announced this week that Tesla’s giant battery in South Australia would have its output and storage increased by 50 per cent with help from the state and federal governments.

The Cybertruck’s cracked windows are not the first time things have not gone to plan for Tesla.

In April this year, footage emerged from China of one of its Model S vehicles exploding while stationary in a car park.