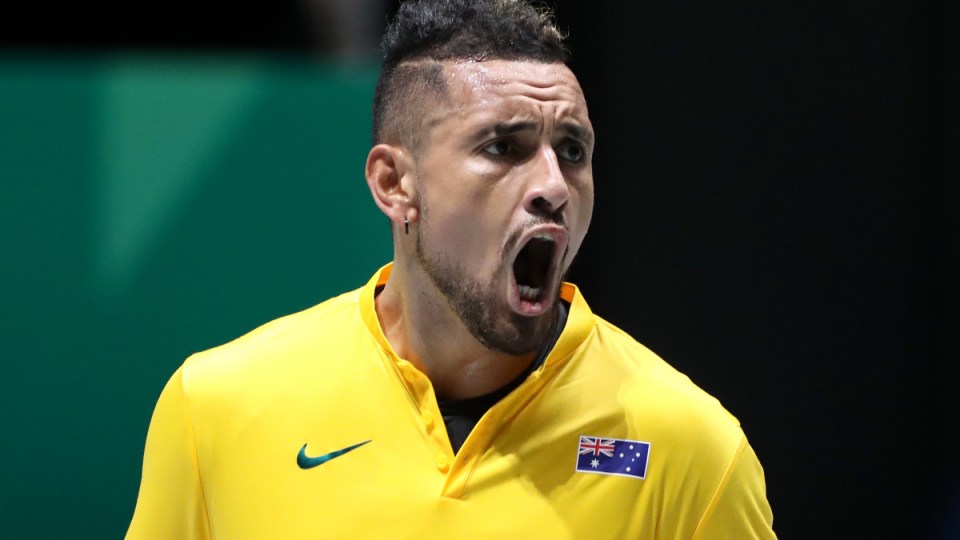 Nick Kyrgios of Australia celebrates during Day 2 of the 2019 Davis Cup. Photo: Getty

A zoned-in Nick Kyrgios has given Australia a 1-0 lead over Colombia in the opening rubber of the Davis Cup in Madrid.

Kyrgios beat Alejandro Gonzalez 6-4 6-4 with a powerful display against an overmatched but gallant opponent who is ranked 468th in the world rankings.

Gonzalez was a late inclusion for the match after Santiago Giraldo, who played Belgium’s Steve Darcis on Monday, was rested.

Kyrgios, who was lauded for his attitude around the squad this week by team captain Lleyton Hewitt, showed none of his histrionics, leaving the underarm serves and tweeners in the locker in his first match for Australia since February 2018.

The 24-year-old was imperious on serve, hurling down 15 aces and dropping only one point off his serve in the opening set and five in the second.

Kyrgios wrapped up the win in just over an hour in front of a crowd loudly dominated by Colombian fans at the Caja Magica venue.

“It’s a new format so it’s a lot different, but he was a tough competitor,” Kyrgios said.

“They had a late blow out so I thought I was going to play Giraldo. It’s never easy when that happens.

“I am just pleased I got the win and hopefully Alex (de Minaur) can do the business in the second match.”

Australian No.1 de Minaur will look to give his side an unassailable lead when he plays Daniel Galan, who took Belgian world No.11 David Goffin to three sets in the opening tie in Group D.