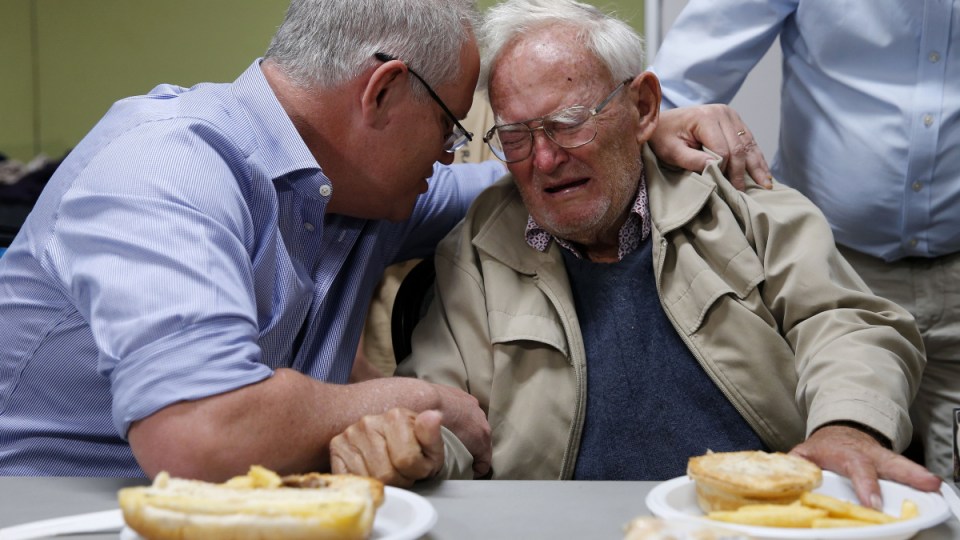 Prime Minister Scott Morrison comforts Owen Whalan who has been evacuated from his home, at Taree Evacuation Centre on Sunday. Photo: AAP

Scott Morrison has comforted an 85-year-old man who broke down in tears after recounting the loss of his property near fire-ravaged Taree in New South Wales, as authorities warned Tuesday’s bushfire risk for the Greater Sydney and Greater Hunter areas is set to be “catastrophic”.

As fires rage across Queensland and New South Wales, it was the first time since the new rating system was developed a decade ago that the NSW Rural Fire Service has issued the ‘catastrophic’ warning level.

It follows three confirmed deaths and the destruction of 150 homes, amid a desperate search to finding other missing residents feared dead.

This shows the dangerous conditions that have confronted firefighters and residents today. This is the crew from Warringah HQ at the Hillville fire near Taree. #nswrfs #nswfires pic.twitter.com/lIhnF8P1Qf

The body of 63-year-old Julie Fletcher was discovered on Saturday night in a burnt-out home 40km north of Taree.

Wytaliba residents Vivian Chaplain, 69, and George Nole have also been named as among the victims.

“Catastrophic is as bad as it gets. Homes are simply not designed to withstand fire under those conditions,” RFS spokesman Anthony Clark said.

“Up on the north coast, where we’ve simply got a lot of fires burning at the moment, those fires have got a real potential to run and impact on lives and properties on Tuesday.

“So the risk is very real.”

As of Monday morning Firefighters were battling up to 64 bushfires across NSW, with 40 fires  uncontained and 40 schools closed on Monday.

In Sept, former Chief of Fire & Rescue NSW, Greg Mullins told #thedrum of vain attempts to meet with PM & ministers on #bushfires. His letters ignored. His pleas that we act now on climate, his concern we're unprepared for this "uncharted territory" of extreme weather – ignored. https://t.co/kEJklA2cQH

Also on Monday morning in Queensland, firefighters were battling more than 50 bushfires with the most challenging blazes at Cooroibah, north of Noosa, and Cobraball, near Yeppoon, where 17 homes have been lost and thousands of people were forced to flee.

Residents have also been told to evacuate a fire at Thornton in the Lockyer Valley.

A prepare to leave warning was in place for blazes at Tarome and Clumber, about 80km southwest of Brisbane; Kilkivan and Jimna near Gympie; and Lower Beechmont in the Gold Coast hinterland.

RFS Commissioner Shane Fitzsimmons said the conditions this week are likely to be worse as a result of high winds and low humidity.

“Not only will they be worse, but they will also be concentrated much further than just the north-eastern area of NSW.

Touring an evacuation centre in Taree, the Prime Minister hugged 85-year-old Owen Whalan, who broke down in tears as he recounted the loss of his Koorainghat property.

The Prime Minister praised the work of the 1200 firefighters now on the ground, but warned the days ahead could prove tougher.

“We’re not out of this yet,” Mr Morrison said.

“I have to tell you, as Prime Minister, I am never more proud of Australians than in moments like these.

During the visit, the prime minister was heckled by a climate change protestor who yelled, “Climate change is real, can’t you see.”

But Mr Morrison declined to be drawn into a debate over the impact of climate change on the bushfires raging across NSW and Queensland.

“I’m focused on the needs of the people in this room today, as is the premier, the needs of resourcing firefighters and to ensure they have everything they need to keep those firefighters safe and to protect as many properties as we can,” he said.

Deputy Prime Minister Michael McCormack slammed Greens MP Adam Bandt for accusing the Prime Minister of being culpable for the bushfires for failing to act on climate change.

“Comments coming from a little Melbourne apartment from a little individual with a little mind should not be accepted or tolerated at this time,” Mr McCormack said.

Labor Leader Anthony Albanese said noted that the bushfires were occurring earlier than usual but said the first priority for authorities now was to save lives.

“I have a relative who, she thinks, that her home has been lost in these fires. So that’s the immediate concern that we have,” Mr Albanese said.

“But certainly, there is a need once we get through this period to really have a look at what the science is telling us and what the experts are telling us, which is that we have had a very prolonged drought that’s been more intense than previous droughts.

“This is a very bad omen at this time of the year that we’re having these devastating fires.”

‘Not out of this yet’: NSW residents told to brace for ‘catastrophic’ fire conditions ahead