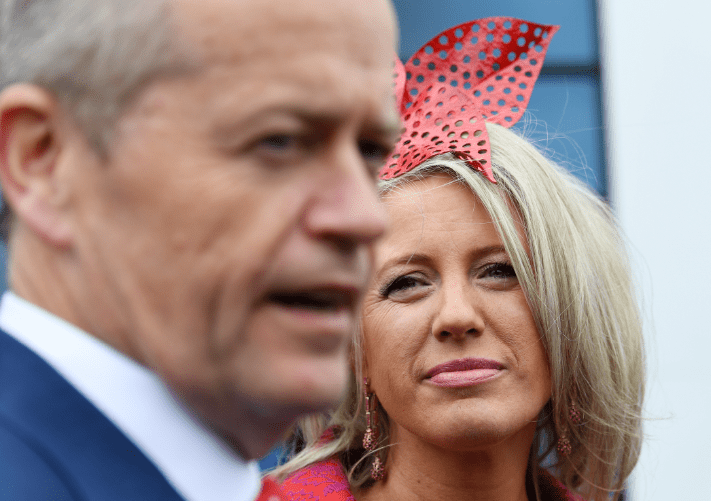 Voters didn't have much time for Bill Shorten, but wife Chloe still had eyes for her man at the Melbourne Cup. Photo: AAP/Julian Smith

Australia’s most trusted election oracle, Newspoll, had a “persistent technical error” which may have falsely built expectations that Labor was the unbackable favourite to win the May election, according to the ALP review.

The shock admission, contained in the post-mortem of the election defeat, has raised the possibility that a prime minister – Malcolm Turnbull – may have been dumped when Labor was not in an election-winning position, and also that the ALP was lulled into complacency by opinion polls.

It also raises the surprising reason why Newspoll consistently overestimated the Labor primary vote, which relates to voters not being able to remember who they voted for at the 2016 election, possibly as a result of the revolving-door sequence of prime ministers. This then flowed though the methodology of the polls and coloured assumptions about preferences.

“After a patchy early career, Winx never lost a Saturday race. But Labor did. In fact, Labor has failed to win a majority in the House of Representatives in eight out of its last nine starts,” it says.

“What went wrong this time? Was Labor burdened with the weight of Clive Palmer’s advertising in its saddlebags?

“Was it nobbled by a dishonest social media scare campaign? Did News Corp cause Labor interference in running?

“Was it the jockey’s fault? Or had Labor become complacent in the lead-up to race day? Our review seeks to answer these questions.”

The report finds three main reasons for the shock loss: Bill Shorten’s lack of popularity with voters, poor strategy, and a failure to adapt to the Coalition’s leadership change to Scott Morrison.

The report also calls for spending caps to stop billionaire businessmen, including Clive Palmer, spending $70 million on advertising – a push the billionaire has dismissed as the excuse of a bad loser.

But one of the report’s most surprising findings relates to the public polling, including Newspoll, that built massive expectations of a Labor victory.

As The New Daily revealed in the aftermath of the election, YouGov-Galaxy, the pollsters behind Newspoll published by The Australian and the Galaxy polls published by the tabloids, was also secretly contracted to conduct the ALP nightly tracking polls.

But the report finds the published polls came with a major error for years.

“First, the publicly available Newspoll figures had a persistent technical error that overstated Labor’s primary vote, understated the Coalition’s primary vote and consistently suggested Labor was in an election-winning position,” the report states.

“However, the persistent Labor lead in Newspoll (and other published polls) created a mindset dominated by high expectations of a Labor victory, and this affected the Party’s ability to process research findings that ran counter to this.”

The report notes that the failure to predict the result of the 2019 federal election has shaken public confidence in the polling industry.

And it also finds the ALP’s $500,000 nightly campaign tracking poll of 20 marginal seats also got “the result of the election wrong”, although it was closer to the mark than Newspoll.

But the reason for the technical error was primarily attributable to a reliance on 2016 “vote recall” as a weighting factor.

“That is, YouGov’s surveys included a question asking participants who they voted for at the previous federal election in 2016, and the final report produced from each survey was weighted to adjust for any over- or under-representation of past support based on the actual results in 2016.

“While that has been a tool used by quantitative researchers for decades, it served to both overestimate the Labor primary vote and the preference flow to Labor.

“The use of vote recall is a standard practice, but on this occasion created significant error in the outcome. This error was perpetuated amongst a range of published polling at the same time.”

Bizarrely, the pollsters argued one of the reasons voters could not remember who they voted for related to the revolving door of prime ministers.

“Why the error occurred is difficult to identify. YouGov has hypothesised the framing of the 2016 election on Medicare and the change of prime minister contributed to many people who voted Labor in 2016 incorrectly recalling their previous vote,” the report states.

“Whether this is correct cannot be definitively answered.”

The report also confirms that the ALP’s internal tracking poll provided Labor with little comfort it was going to win, despite Bill Shorten’s optimism.

“For seven of 32 reports Labor was behind, and for 11 more nights Labor had a swing of less than 1 per cent – not enough to win the election,” it says.

Senior Labor figures also warned that the report offers a poisoned chalice because it puts so much weight on Bill Shorten’s lack of popularity.

“So if Albo is less popular than Morrison before the election, do they dump him?,” a Labor strategist wondered.

Labor leader Anthony Albanese will respond to the report on Friday in a speech at the National Press Club.

‘I am not afraid’: The modern unknown soldier risks it all in Ukraine
Energy market reform will be a big boost for emissions reductions: Chris Bowen
Greens sign up for Labor’s looming jobs-and-skills summit as Liberals stick with boycott
Joe Biden’s $430b green victory for the environment
China cementing its Thailand ties with joint military exercises
NRL: Titans frantic to end 10-game losing streak as Manly showdown looms
Emergency warning issued for NSW bushfire
Today's Stories