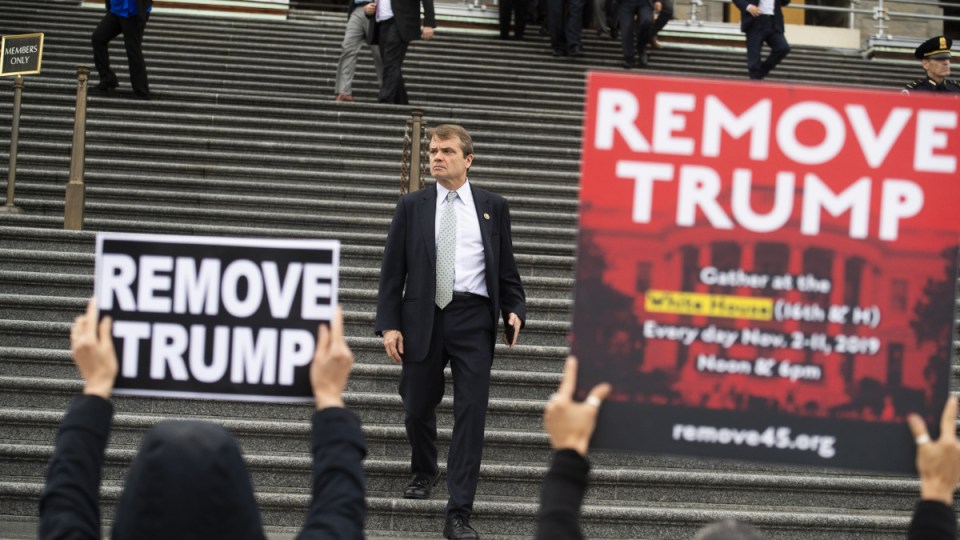 Representative Mike Quigley, D-Ill., walks by protesters outside the Capitol after the House vote on an impeachment inquiry. Photo: Getty

The US House of Representatives has taken a major step in the impeachment effort against President Donald Trump as lawmakers approved rules for the next stage of the Democratic-led inquiry.

The Democratic-controlled House voted 232 to 196 to establish how to hold public hearings in Congress, which could be damaging for Mr Trump ahead of the 2020 presidential election.

It was the first formal test of support for the impeachment probe and showed that Democrats have enough backing in the House to later bring formal charges, known as articles of impeachment, against Mr Trump if they feel they have enough evidence.

"I don't know why the Republicans are afraid of the truth."

House Speaker Nancy Pelosi spoke on the House floor before the House vote on a resolution to formalize the impeachment inquiry into President Trump. https://t.co/NM4BGfE2bM pic.twitter.com/Lh0jZNN7vs

“No one comes to Congress to impeach a president,” she said.

Republicans have largely stuck by Mr Trump, blasting the effort as a partisan exercise that has given them little input.

The vote largely broke along party lines. Only two Democrats voted against and no Republicans backed it.

Mr Trump has denied wrongdoing and called the inquiry a sham, taking to Twitter to describe the proceedings as the “greatest witch hunt” in US history which would hurt the stock market.

If the House eventually votes to impeach Mr Trump, that would set up a trial in the Republican-controlled Senate.

Mr Trump would not be removed from office unless the Senate votes to convict him by a two-thirds margin.