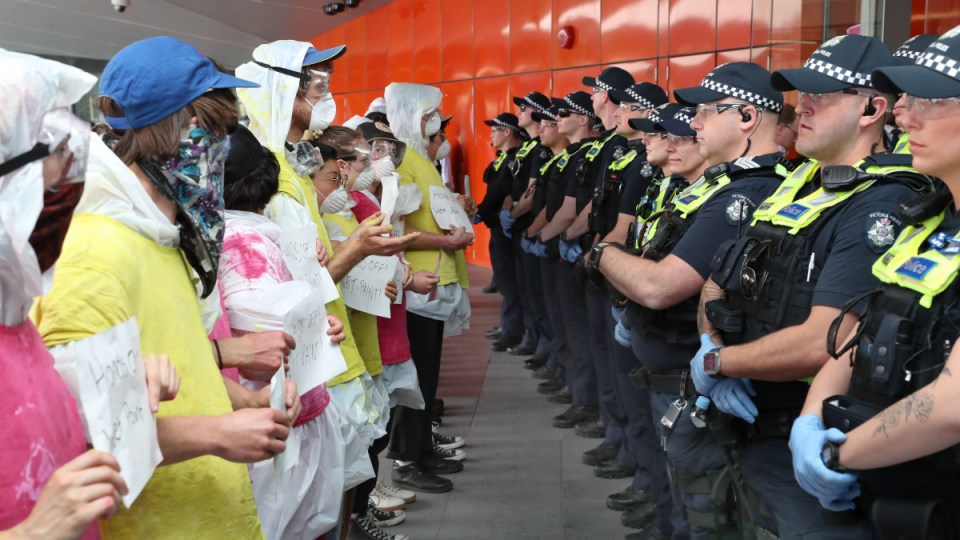 About 30 activists are believed to have have been charged over rowdy demonstrations during which people were manhandled and pepper-sprayed outside a Melbourne mining conference.

The volatile rally outside the city’s Convention and Exhibition Centre ended on Thursday in a calmer fashion than the previous two days which saw tense clashes with police.

Some 100 demonstrators, some wearing goggles, masks and raincoats – and covered in wet paint to deter police from grabbing them – chanted before marching to the office of mining company Rio Tinto on Thursday.

The group partially blocked Collins Street for a short time while they gave speeches, before peacefully dispersing.

But activists are expected to gather for another rally outside a dinner for conference attendees in Southbank later in the day.

One protest organiser, who did not wish to be named, said some 30 people had been charged since Tuesday, while a further 50 had been released and told they might be charged on summons.

The activist said he was one of a number of people arrested on Tuesday while using a megaphone to co-ordinate the protests.

He said he had been accused of breaching the peace, refusing to move on when asked to do so and resisting arrest.

Seventeen people were arrested on Wednesday. By the end of Tuesday police said 50 arrests had been made involving 47 people – three of whom had been arrested twice.

Asked how many of those arrested had been charged, Victoria Police said on Thursday could not give a figure as people were still being “processed”.

On Wednesday, about 300 protesters tried to block access to the conference with some glueing themselves to the ground and others shimmying up poles.

At least two protesters made it inside the meeting, with one storming the stage before being removed.

Victoria Police acting commander Tim Tully said officers had been doing “a tremendous job in what has been very difficult and trying circumstances”.

He told 3AW that while police did not want to use capsicum spray on the crowds he believed it was “completely justified in the circumstances”.

“You can’t pepper spray your way out of a climate crisis,” he told reporters.

You can’t pepper spray your way out of the climate crisis, governments. https://t.co/SoPJU89VtA

A GoFundMe page set up by protest organisers to pay for legal and medical costs has so far raised more than $16,000.

“We’ll have more to say in coming days about the vicious actions of the police this week,” Ms Black said.

“But one thing is certain: as the climate emergency intensifies, there’s an urgent need to keep building civil disobedience actions.”

More charges pending over mine protests