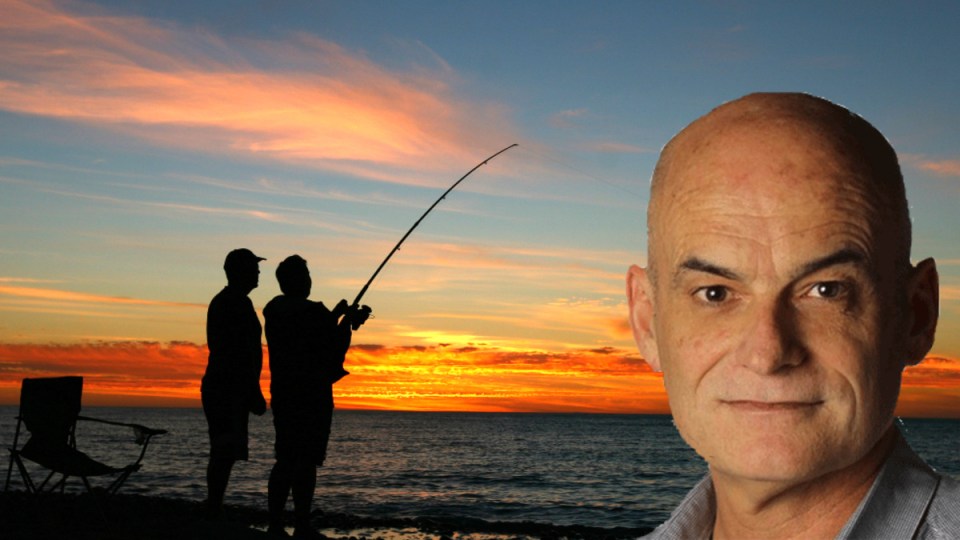 No Charles Manson of the sea – Garry Linnell just likes to know where his food comes from. Photo: Getty/ TND

There I was last weekend, minding my own business on a beautiful warm afternoon, my hands dripping with blood and my knife still warm from the flesh of my latest victim, when a stranger wandered past and decided I was way out of line.

They see someone up to their elbows in gore and suddenly become all self-righteous and feel the need to intervene.

I was fishing on a local beach and had just spent 10 minutes landing a large Australian salmon.

It was a biggie, too. More than three kilograms, it had lived up to the species’ reputation for putting up a fierce fight by repeatedly leaping out of the waves in an effort to throw the hook.

But if the salmon is known for its resistance, it is less well regarded for its eating qualities. It must be bled immediately and handled with care.

So once landed, I killed it using the humane Ikejime method– a sharp knife through the brain – before bleeding it and burying it head-first in the moist sand.

Which is when a woman with her daughter came strolling past and decided they had stumbled on the Charles Manson of the Sea.

The pair of them could see the salmon’s tail sticking up out of the sand. It was occasionally twitching as a few remaining electrical signals to its nerve system fluttered out.

I’ll admit it looked a little macabre. But to this woman the scene was one of utter carnage.

She cast a horrified glance at the twitching tail, spied the blood on my hands and assumed I had buried the fish alive.

She walked a further 20 metres down the beach before unleashing a storm of abuse. There was a strong breeze blowing and the only words I could make out were “cruel” and “bastard”.

“But the fish is dead!” I shouted.

There was nothing I could say to change her mind.

Not even an invitation to join my wife and I for a platter of fresh sashimi could diminish her fury.

I imagined her later that day, strolling through her cloud of self-righteousness into the supermarket to buy ingredients for that night’s dinner.

Into her trolley she would place a tray of lamb in its shrink-wrapped packaging, made to look fresher by favourable lighting and with nothing on the label to suggest the animal was frolicking innocently in a sun-drenched paddock a few days earlier before being hauled away for slaughter at a nearby abattoir.

Perhaps she would buy some vegetables, too.

But without the aid of a powerful microscope to help read the fine print at the bottom of the shelf, she would have no idea if the carrots and potatoes she was buying were genetically modified.

And without the assistance of a high-tech laboratory she would have no idea if the flavourless fruit she was purchasing had been refrigerated for months.

As for those perfectly cut cheese slices in their plastic containers … did they come from the same quaint rural farm depicted on the label, where happy cows smile and kick up their feet in sheer joy?

Or were they processed at a vast, industrial-sized factory and treated with a long list of additives and chemicals?

Just days after my encounter with my accuser on the beach, Sydney’s The Daily Telegraph reported that activists were now targeting recreational fishing as the latest example of humanity’s mistreatment of animals, with young boys proudly showing off their catch trolled and vilified on social media.

But rather than just another animal rights issue, the assault on weekend fisher men and women and my own encounter on the beach underline yet again how so many people no longer want to know where their food comes from.

Even the curious find the going hard.

Food labelling laws in this country have long been a joke; the powerful multinational food companies with their armies of expensively suited lawyers and lobbyists have been bludgeoning successive governments into submission for decades.

“Serving sizes” are usually determined by manufacturers who estimate how much an individual will eat, not how much they should eat.

Heavily processed cereals saturated in sugar and other additives are marketed for their “health benefits”.

Food contamination scandals and product recalls are a weekly event, making it easy to forget – or to choose to forget – those recent incidents of frozen berries contaminated with salmonella or hepatitis A.

It’s little wonder so many consumers are confused by various product claims and prefer to shy away from wanting to know where their food really comes from.

But pleading dumb innocence is no excuse.

By willingly removing ourselves from the process, we give the giant food manufacturers and marketers more opportunities to boost profits by lowering product quality and fudging information about its true origins.

At least I know where my fish comes from.

And when it comes to our food chain, we all have a little blood on our hands.

Garry Linnell: Fresh food people? Let’s not bury our heads in the sand