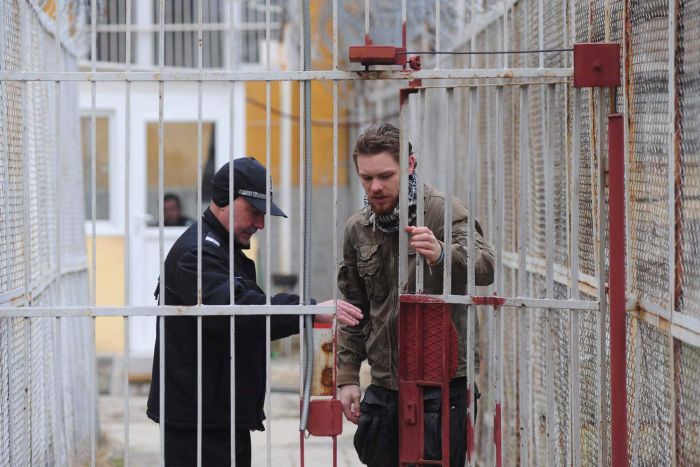 Jock Palfreeman was convicted of murder and attempted murder in 2009 and sentenced to 20 years behind bars. Photo: Dobrin Kashavelov

The federal government has urged Bulgaria to let convicted murderer Jock Palfreeman return to Australia, amid fears “political interference” could pressure courts to order the Sydney man back to jail.

Mr Palfreeman was freed on parole last month after more than a decade inside a Bulgarian jail for killing a university student the 32-year-old Sydneysider maintains had been the violent aggressor in a fight.

But a day later, instead of enjoying the new-found freedom, Mr Palfreeman was transferred to immigration detention.

In an unprecedented step, the country’s prosecutor-general had lodged an application to have the case against Mr Palfreeman reopened.

On Thursday, Foreign Minister Marise Payne said she was concerned “a range of non-legal considerations” were at play in the case.

“While the parole decision itself cannot be appealed, the prosecutor general is questioning technicalities about the handling of the case,” Senator Payne told Parliament.

“We understand that this is outside Bulgaria’s normal legal process and we would be concerned if non-legal issues were seen to have an influence.”

The senator is not alone in worrying if decisions about the Australian man’s fate may not be just about justice.

Since his arrest at age 21, Mr Palfreeman, his family and supporters (among them human rights advocates) have suspected interference from powerful political influencers.

Mr Palfreeman told ABC on Thursday he believed it was possible he would be set up and imprisoned again, adding he felt “anything” could happen in Bulgaria’s legal system.

“They would put drugs in my room. They would get a false witness against me. They would set me up to try to get me another sentence and to put me back into maximum security,” he told the ABC.

Mr Palfreeman was convicted of after premeditated murder after Bulgarian law student Andrei Monov was fatally stabbed in the early hours of December 28, 2007.

Mr Monov, 20, was stabbed once in the chest, while 19-year-old Antoan Zahariev received a slash wound to the body.

The prosecution insisted Mr Palfreeman had been out to kill, and – along with the victim’s family – wanted the court to impose a life sentence.

Since his arrest over the 2007 death, Mr Palfreeman has maintained the stabbing had occurred as he rushed to defend a group of Roma people being attacked on the street.

He was out with friends in the city of Sofia, and had been carrying a pocket knife.

He claims he went to defend a Roma man, knowing that Roma (Gypsy) people had been targeted in violent attacks.

“A couple of months before my fight … there were a couple of murders whereby neo-Nazis had beaten Roma to death,” he told the ABC on Thursday.

The defence also criticised the police for failing to secure the crime scene, get CCTV footage or call all the important witnesses to give evidence.

In September this year, security vision was released of the night of the stabbing.

It had never been shown at the trial.

The footage appears to show Mr Palfreeman run to the aid of a man being attacked.

Mr Palfreeman’s lawyer Kalin Angelov said it was clear the CCTV backed up the version of events that Mr Palfreeman was acting in self-defence and in defence of another person.

“Whether it was legitimate or excessive self-defence should have been in the centre of the court’s analysis … For sure, it was not an intentional killing deserving a 20-year prison sentence,” Mr Kanev told ABC.

The theory about political interference has been strengthened by the fact the stabbing victim’s father was at the time a powerful politician.

Following the parole verdict, Hristo Monov – a former Bulgarian Socialist Party MP – called for the judge who presided over the appeal to be sacked.

He blasted the judges for their decision. He has been outspoken in his grief and criticism of Mr Palfreeman, who he has previously labelled a “sociopath”.

“They (judges) will carry a moral disgrace on their own,” Mr Monov told local radio station Darik Radio.

“The biggest problem in this country is the judicial system, and that’s not the prosecution, but the court.”

In response to the politicians’ outrage, Bulgaria’s judges union said politicians needed to respect the separation of powers.

“Instead the Bulgarian judge receives a clear and categorical sign that if they don’t rule in accordance with the public opinion and wills of the political parties and their specific political leaders, they are going to be abused, vilified, physically persecuted and maltreated,” the union wrote.