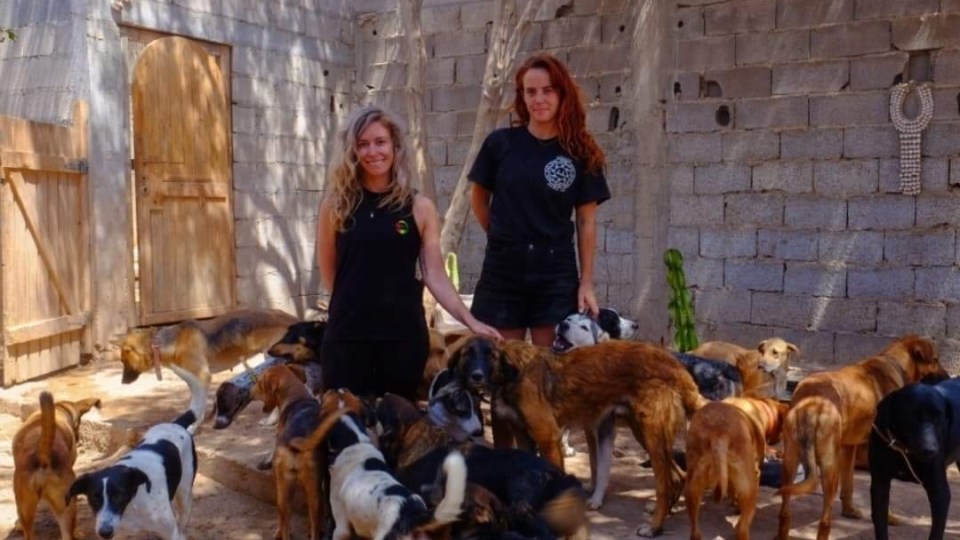 Megan Bannon and Lucy Austin are on a mission to re-home the animals that faced certain death.

Hundreds of dogs in a popular beach resort city in Morocco have been saved from government-sanctioned firing squad death, thanks in part to the work of two Australian women.

Victorian friends Lucy Austin and Megan Bannon are among the “Angels of Agadir”, a group finding homes for the malnourished dogs that have for years been overrunning city streets in the African nation.

Scores of dogs doomed to suffer appalling deaths have been restored to health and offered new lives in homes across Europe and the US under the new initiative.

“It’s everywhere here,” Ms Bannon said.  “When you see the suffering literally right in front of you, you can’t sit back and do nothing.”

It comes after disturbing footage was released last year showing the inhumane killings of strays who were shot and left to die on the roadside in a cull organised by Moroccan authorities.

The arrival of marksmen into the town came before a visit by FIFA officials, who were meeting in Agadir to determine if Morocco would be suitable to host the soccer World Cup.

Another 500 were rounded up and dumped at a pound.

Ms Austin, from Mt Eliza in Victoria, released images and video revealing the plight of the surviving animals that had been crammed into the compound in stifling heat without adequate food or water.

The 36-year-old had been working in the resort town for several years but said she was compelled to do something after seeing the destitute dogs for herself.

“There was not enough space, not enough food, not enough water and nobody looking after their basic hygiene,” she said.

“The dogs started turning on each other – fighting each other to stay alive.”

Ms Austin was initially granted access to remove some of the animals but has since faced restrictions from the pound manager angry after her social media posts went viral.

Ms Bannon, from Stawell in country Victoria, quit her London job and joined the fight after seeing the ugly images.

“It upset me when I saw it online,” Ms Bannon said.

“It floored me when I saw it in real life. I went home after my first visit to the sanctuary and just cried.

“I’ve never witnessed this kind of neglect before.

“It broke my heart.”

As volunteers for welfare group Morocco Animal Aid, the duo are now working to establish a new shelter with a focus on permanently working to restore the health of dogs and get them safely released or re-homed.

Under the banner “NoMad Dogs”,  they are continuing to neuter and vaccinate the animals – an initiative that has demonstrated success in other countries with similar problems, particularly across Asia.

They also hope to recruit volunteer international vets as the initiative is expanded into new territory.

“We hope to secure a space within each new area,” Ms Austin said.

“The dogs are then taken from the streets, neutered, vaccinated, tagged and will be able to recover in the new shelter until they are fit to either be released back safely or they can be re-homed via Morocco Animal Aid.”

Celebrity vet Dr Chris Brown is among the welfare group’s followers on Instagram.

Both determined women said they were committed to ensuring the scheme was rolled out nationwide. But they admitted they can’t do it alone.

“We are two young Australian women, living in rural Africa, trying to make something work and to make a difference,” Ms Austin said.

“We aren’t here for ourselves. We are here because we genuinely want to create and see a sustainable change in the way these animals are treated.

“We are fighting against a government that acknowledges there is a problem, but isn’t willing to allow us to step in and offer a working solution.”

The Australians have launched a fundraiser campaign as they work to expand the program.