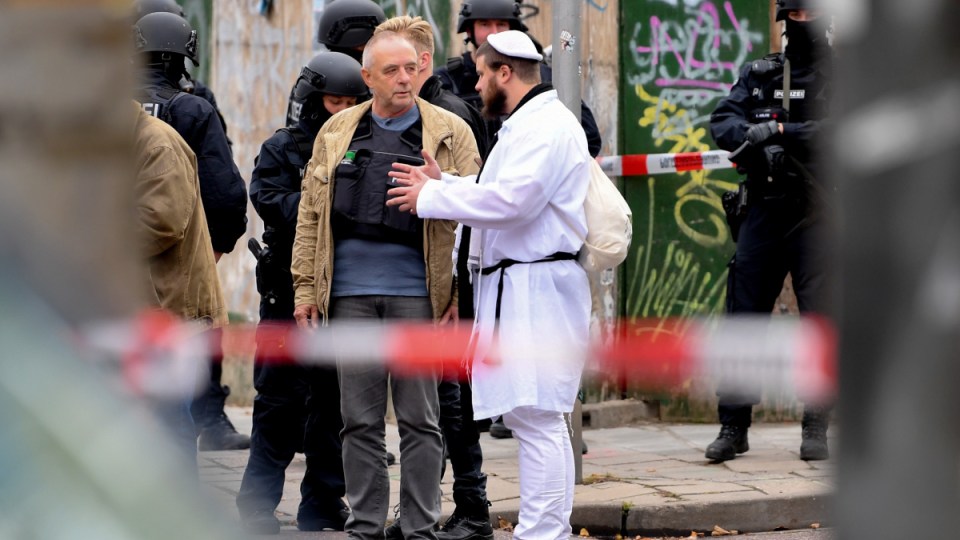 A synagogue visitor talks to police after the shooting in Halle, Germany. Photo: AAP

Footage from shooting attacks in the German city of Halle was livestreamed on Amazon’s video gaming platform Twitch.

Two people were killed in the attacks on a synagogue and a kebab shop and one suspect was arrested.

A Twitch spokeswoman confirmed footage from Wednesday’s attack was livestreamed before the content was removed.

“We are shocked and saddened by the tragedy that took place in Germany today, and our deepest condolences go out to all those affected,” Brielle Villablanca said on Wednesday.

“Twitch has a zero-tolerance policy against hateful conduct, and any act of violence is taken extremely seriously. We worked with urgency to remove this content and will permanently suspend any accounts found to be posting or reposting content of this abhorrent act.”

Twitch, which says it has 15 million daily users, is primarily a site where gamers can livestream their games and chat to other users, though it also has channels focused on sports, music and politics.

The violence occurred on Yom Kippur, the holiest day of the calendar in Judaism.

Police said at least two people had been killed in Halle – outside the synagogue and at a nearby kebab shop – and one person has been arrested.

The attacker is believed to be a 27-year-old German man with an extreme-right background.

The man live-streamed the attack using a camera on his helmet while he ranted about Jews, feminism and immigration according to the International Centre for the Study of Radicalisation (ICSR) at King’s College London.

Speaking in English, the man called himself “anon” and said he was a Holocaust denier.

“Feminism is the cause of declining birth rates in the West, which acts as a scapegoat for mass immigration, and the root of all these problems is the Jew,” he continued while filming himself in a car before starting the attack.

Witnesses inside the synagogue said the gunman, who was wearing a steel helmet and boots,  tried to force his way through the door, where dozens were inside observing Yom Kippur, the holiest day of the year in Judaism

The headcam footage showed the attacker attempting to break into the synagogue and swearing in German repeatedly as he failed.

Police had warned the public to remain alert and stay indoors as other assailants may still be at large but later lifted the alert.

Jewish community leader Max Privorotzki told Der Spiegel magazine there were between 70 and 80 worshippers inside the synagogue at the time of the attack.

Anti-Semitic crimes, especially violent ones, are on the rise in the country and the word “Jew” has become a swear word in some schoolyards.

A witness at the kebab shop, where the second victim is believed to have been killed, said he had been ordering a kebab at the time of the incident.

“The man came towards the kebab shop. He was wearing a balaclava and carrying an assault rifle,” the witness told German broadcaster n-tv.

“He threw a grenade, which bounced off the (shop’s) doorframe and exploded in front of another guest on the floor.”

“One patient has gunshot wounds and is currently undergoing an operation,” Mueller said, declining to give details about the identity of those wounded.