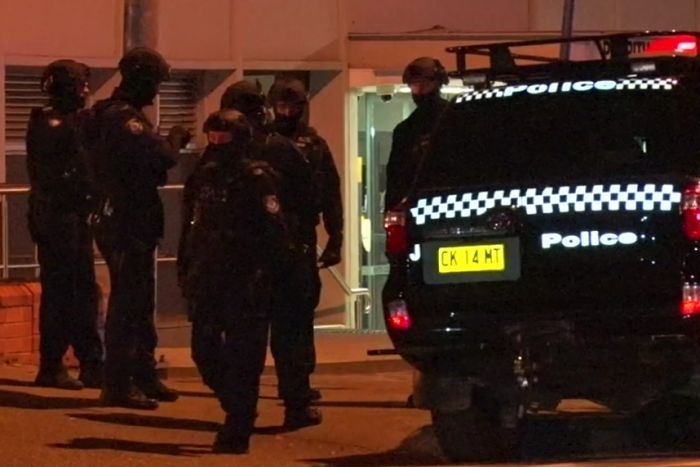 Penrith Police Station was the target of a lone gunman who opened fire on Wednesday night. Photo: ABC

A gunman who was shot dead by police had embarked on a shooting spree targeting two western Sydney police stations and a residential home, police believe.

The dramatic showdown between officers and the man armed with a pump-action 12-gauge shotgun outside Penrith Police Station on Wednesday night was filmed by terrified witnesses.

A male constable was injured during the “extreme” confrontation, with pellet wounds to the back of his head, and was taken to Westmead Hospital in a stable condition, police confirmed.

Several other officers suffered minor injuries that were not gunshot-related.

The gunman has been identified as 32-year-old Daniel King.

Shocking footage of the shooting which happened after about 9.30pm Wednesday shows the man in a dark shirt and trousers brandishing a weapon and advancing towards police, opening fire.

Our exclusive vision of a shootout at Penrith police station https://t.co/ksmLhH43ia

“He is shooting the police!” a woman can be heard screaming in the video, and repeating ‘Oh my God, oh my God’ while filming the horrific scene unfolding.

Two officers are seen approaching their attacker before the popping of a volley of shots is heard and the gunman collapses to the ground.

Police said the man was shot in the chest and his body was dragged into the station to render first aid, amid fears an accomplice may have been in the area.

Deputy Commissioner Jeff Loy of NSW Police Metropolitan Field Operations confirmed police had thought a second offender was outside but it was later discovered to have been a public witness running for safety.

Police said the dead gunman was believed responsible for two gunfire attacks earlier in the night on a home and second police station.

Shots had been fired into a residential house on Quakers Road, Marayong, at about 8.45pm followed by gunfire sprayed into the front of St Marys Police Station, about 7km from Penrith, at 9.15pm.

At about 9.30pm the gunman parked outside the Penrith station on High Street before opening fire. The car was being searched by police early Thursday morning.

Officers have been searching the car witnesses say they saw a man pull up in, outside Penrith Police Station, before a shootout with police. It’s believed he has been killed @2GB873 pic.twitter.com/QEpXTO0GqY

“Police are trained, everyday they know thy are in a dangerous and challenging role but this is really extreme; the criminality here is extreme,” he said.

Deputy Commissioner Loy also praised the bravery and courage of officers whom he said also showed “care and empathy” by moving the shot gunman into the station to render first aid.

Western Sydney Shootings: A gunman is dead and two police officers injured after shots were fired at police stations in Penrith & St Marys. Earlier in the night shots were fired into a home on Quakers Road in Marayong. https://t.co/2WBpspZ1RR #7NEWS pic.twitter.com/jAcrjcBrp9

Pub worker Mick Lumtin, 48, told The Daily Telegraph he watched the man get out of a white 4WD and walk calmly up the street.

“We saw the guy literally walk up the street with a gun, so I am like really?” he said.

“(He was) just walking, nice and calm, he wasn’t angry, he was relaxed.

“When he jumped out of his car, the shotgun was down by his side and when he got to the police station he pulled it up over his shoulder.

“As he pulled it over his shoulder, the police pulled up.”

A Critical Incident Investigation Team from the State Crime Command’s Homicide Squad will investigate the circumstances surrounding the incident.

The investigation will be subject to independent review.