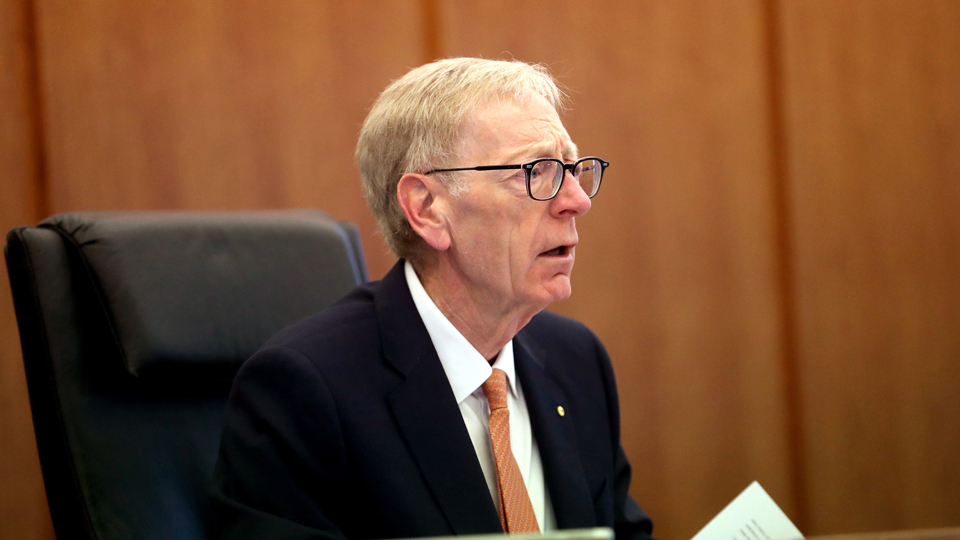 “What does the use of royal commissions tell us about how our existing governmental structures are working?” he asked.

“And the immediate answer to that question may be that it shows that those structures – legislative, executive or judicial – are not working as they should. If they were, why would we want or need so many royal commissions?”

In an extraordinary attack on the calibre of Australia’s modern political leaders and the media, Justice Hayne said trust in all institutions had been damaged or destroyed.

The rise in the number of royal commissions should not be regarded as a fad, he said.

“Reasoned debates about issues of policy are now rare. Three- or four-word slogans have taken their place,” Justice Hayne said.

“Political and other commentary focuses on what divides us, rather than what unites us. (Conflict sells stories; harmony does not.) And political rhetoric now resorts to the language of war, seeking to portray opposing views as presenting existential threats to society as we now know it.

“Trust in all sorts of institutions, governmental and private, has been damaged or destroyed.”

The former Justice of the High Court delivered the speech to Melbourne Law School in late July, but it was only published on The University of Melbourne website this week.

He said the need for royal commissions into the banking sector, disability services and aged care reflected the public’s desire for an inquiry that was truly independent.

“These ideas of independence, neutrality, publicity and reasoned reports may be contrasted with what some – perhaps many – would see as the characteristics of modern political practice with its emphasis on party difference, and with decision-making processes that not only are opaque but also, too often, are seen as skewed, if not captured, by the interests of those large and powerful enough to lobby governments behind closed doors,” he said.

Justice Hayne, a former judge who served on the High Court for decades, said the recent example of the debate over the Uluru Statement on indigenous recognition in Australia’s Constitution was a case in point.

The statement calls for a ‘First Nations Voice’ in the Australian Constitution and a ‘Makarrata Commission’ to supervise a process of ‘agreement-making’ and ‘truth-telling’ between government and Aboriginal and Torres Strait Islander peoples.

But conservatives have claimed it would represent a “third chamber” to Parliament despite the fact the statement does not call for one.

“We have seen that in this country in the debate about the Uluru Statement from the Heart,” Justice Hayne said.

“We have seen that in the United States in the debate about the Mueller report. The examples can be multiplied.

“The increasingly frequent calls for royal commissions in this country cannot, and should not, be dismissed as some passing fad or fashion.

“Instead, we need to grapple closely with what these calls are telling us about the state of our democratic institutions.”