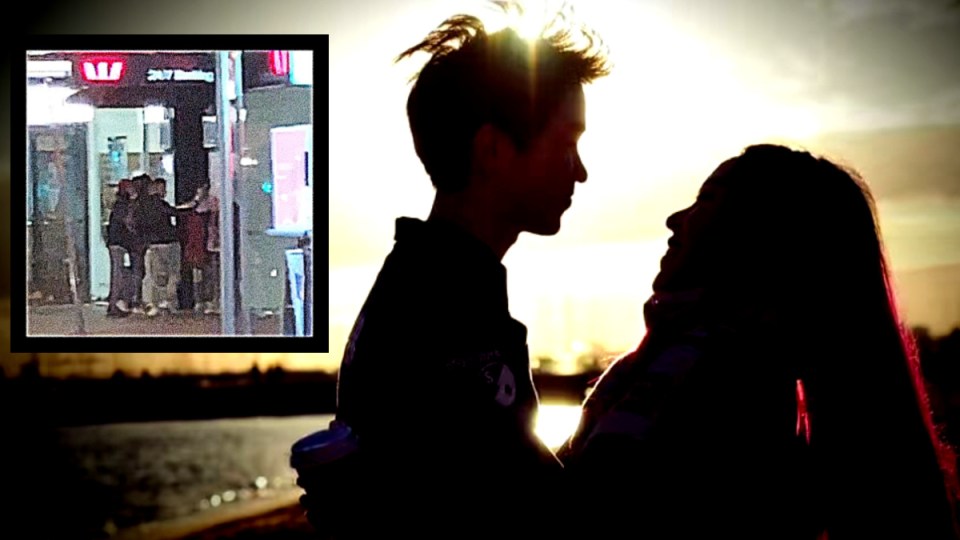 The couple was on a night out for dinner when they were attacked by the teens (inset).

A university student has told how he was punched in the face while defending his girlfriend during a racially-motivated attack on one of Melbourne’s busy shopping strips.

Police are hunting for the group of violent teens who also taunted and bashed a security guard on the same night they were caught on film cornering the young couple.

Vital Bi Sheng said he and his girlfriend, both 21, were walking down Chapel Street in Prahran looking for a spot to eat when they were accosted by the three males.

The trio cornered Mr Bi Sheng’s girlfriend and began shouting abuse, telling her to “go back to where you came from” and calling her racist names.

“They initially jumped into my girlfriend’s face and tried to lay hands on her,” Mr Bi Sheng told The New Daily.

“She was pretty scared. She’s scared to go out now. It’s awful.”

The trouble started about 7pm on Wednesday as Mr Bi Sheng and his girlfriend, who did not want to be named, were walking near Lux nightclub.

“There were three boys at McDonald’s, opposite KFC and they just shouted and started screaming stuff and came up into our faces, really randomly,” Mr Bi Sheng said.

“(They were shouting things) like ‘Ching Chong’ at us and assuming we don’t understand English.”

The Monash University student said that when he stepped in to help his partner, the men became more aggressive.

“One just threw a punch at me,” he said.

Victoria Police spokeswoman Belinda Batty confirmed the group was wanted for striking a man to the head a short time after the first assault.

“On both occasions, the youths were heard using racial slurs toward the victims,” Ms Batty said.

Mr Bi Sheng said he was left “outraged” by the assault and his girlfriend has been scared to leave the house.

“The bad thing was after they assaulted me they started to head towards Elizabeth Street and they assaulted Indian security saying racist stuff,” he said.

“I met him at the police station. His face was swollen.

Mr Bi Sheng said he feared racism was on the rise.

Ms Batty said police were still looking for the offenders, who were described as being in their late teens.

‘She’s scared to go out now’: Two people beaten up in racist attacks in Melbourne