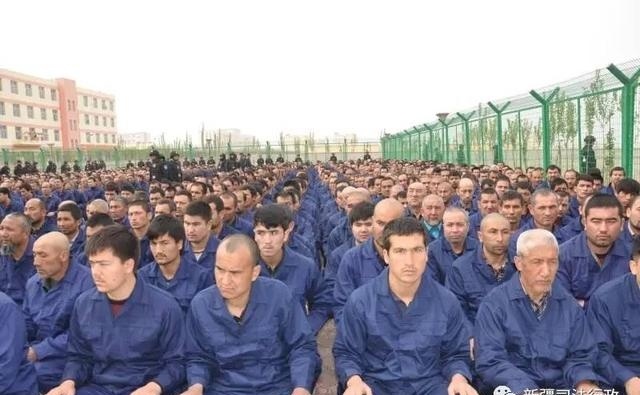 The Chinese government has denied reports it is locking up Australians and their relatives, claiming the missing family members are actually living a ‘free and normal’ life in their country.

Amid mounting pressure from loved ones across the world to release the group of minority Muslims held in China’s Xinjiang province, a spokesman for the country has slammed “false accusations” it says were fabricated by “rumourmongers”.

A Chinese Foreign Ministry spokesman dismissed reports from Canberra that some of the Uyghur people locked up are Australian.

“After careful verification, we find they are all false accusations, or even trumped-up rumours with ulterior motives,” the spokesman said in a report published in China last week.

His comments came after Foreign Affairs Minister Marise Payne told Parliament on Wednesday the federal government would seek co-operation from Beijing in organising a visit to the Xinjiang region.

The spokesman singled out Azmat Omarhoje, who told the ABC earlier in July that his nieces, nephews, siblings and parents were missing.

“What was hyped up by the media didn’t even exist at all … His 27 relatives are living a free and normal life in China.”

An estimated one million Uyghurs, a minority Turkic ethnic group, are believed to be locked up in ‘“vocational training centres” in Xinjiang, an autonomous territory in north-west China.

People from other ethnic minority groups in the area have also allegedly been detained, and human rights groups are trying to understand the exact number of people missing.

Children are reportedly being separated from their parents, dual nationals have had their passports confiscated, and camp detainees are made to denounce their faith, forbidden to speak their language and forced into slavery.

At least 17 Australian permanent residents have allegedly disappeared into the camps.

But the effect on Australia’s 3000-strong Uyghur community is likely even greater; many have not heard from their relatives in China.

Now the Chinese government has stepped up its efforts to defend the camps, claiming in a recent report that Islam was brought into the region by force during a religious war in the 10th century.

“The Uyghur conversion to Islam was not a voluntary choice made by the common people, but a result of religious wars and imposition by the ruling class,” the report said.

“Islam is neither an indigenous nor the sole belief system of the Uyghur people.”

The Chinese Foreign Ministry in Australia has also upped its propaganda around the camps, claiming that Uyghurs are living a “free and normal” life.

In a recent statement, a spokesperson for the embassy said people living in the region are free to practise religion without interference.

“It is understandable that you are so interested in Xinjiang, where there reside all of the 56 ethnic groups in China,” the spokesperson said.

“People of 56 ethnic groups all live happily and harmoniously on the beautiful land of Xinjiang. Anyone that has been to Xinjiang will know what a real Xinjiang is like.”

Claiming that media reports into the camps are built on baseless lies, the embassy suggested that many of the Uyghurs were trying to get Australian visas.

“Why are you always keen on reporting baseless stories and believing the lies fabricated by a very small number of individuals? Those people may have different purposes,” the spokesperson said.

“For example, some seek to reside overseas and some are professional rumourmongers that smear and vilify China.”

A human rights group started by scholar Gene A. Bunin has created a database in a nascent effort to list each person detained in the area.

Its next aim is to help people identify the whereabouts of children whose parents may have been detained.

The Xinjiang Victims Database now has more than 5041 entries, with loved ones and friends lodging missing person testimonies from all over the world.

Mr Bunin told The New Daily volunteers had been documenting people missing in the area, including Kyrgyz, Kazakhs, Uyghurs and people of other ethnicities.

“As goes the Uyghur proverb, tama – tama köl bolar (drop by drop a lake is formed).”

Mahmut Anwar, an Australian tradesman has testified on the behalf of his cousin who has been detained in a concentration camp for an unknown amount of time, for an unknown reason.

“Mahmut has not been in contact with his relatives in Xinjiang for two years now after they told him not to contact them for their safety,” he wrote.

Darren Byler, an anthropologist from the University of Washington, testifies that his poet friend Perhat Tursun has been detained since January. His location is unknown.

“She has not been able to leave her home town of Bachu or get her passport back. She is under house arrest with her four-year-old daughter,” he wrote.

In cases where the person detained has critical health problems they’re put on a special list, asking for urgent information.

The average amount of days without an update is 645.

Australia has expressed criticism of China’s treatment of Uyghurs, joining 21 other countries including Britain, France and Japan at the UN human rights council to demand the closure of the camps.

“We call on China to uphold its national laws and international obligations and to respect human rights and fundamental freedoms, including freedom of religion or belief in Xinjiang and across China,” the letter said.

“We call also on China to refrain from the arbitrary detention and restrictions on freedom of movement of Uyghurs, and other Muslim and minority communities in Xinjiang.”