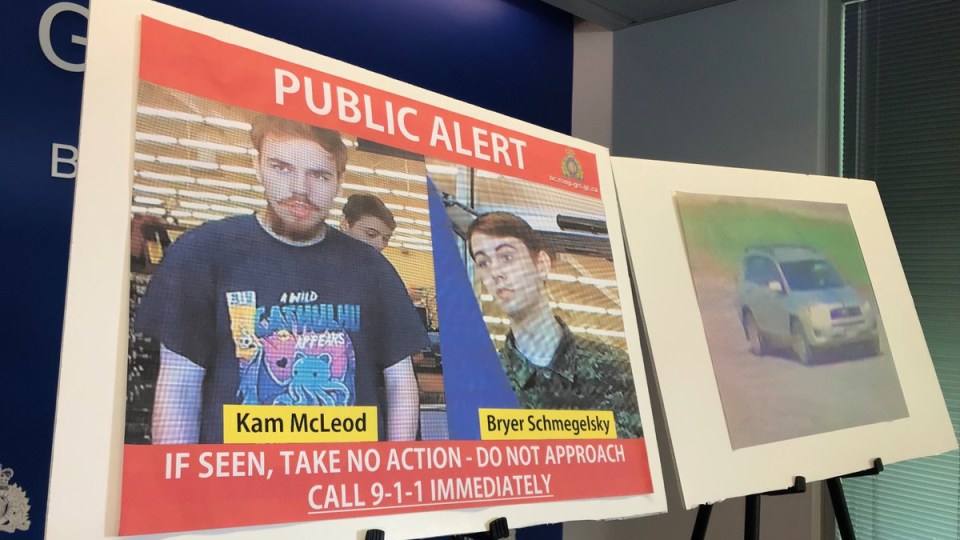 The two missing teenagers have been named as suspects. Photo: Twitter/Ian Bailey

The father of one of two teen suspects wanted over the murders of three people including an Australian man and his girlfriend says the young men “know how to hide”.

The net is closing in on Canada teens Kam McLeod, 19, and Bryer Schmegelsky, 18, who have been named as suspects in the suspicious deaths including the suspected shooting of NSW man Lucas Fowler and his US girlfriend Chynna Deese.

A massive manhunt is underway in Canada for the pair, with the most recent sighting of them coming from Manitoba – thousands of kilometres away from where the bloodied bodies of Mr Fowler and Ms Deese were discovered more than a week ago.

It came after the distressed father of Bryer Schmegelsky broke his silence, reading a text message from his son which came on July 12.

The text from his son concluded: “I won’t have internet for a while. I’ll talk to you when I can.”

Al Schmegelsky told CHEK news in Canada that he assumed the pair was headed for Red Deer where the Schmegelsky family has relatives.

Mr Schmegelsky added that he was confident the two friends were still alive and that they knew how to protect themselves because they had experience with a replica gun, hunting and “play war” on video games.

“They know how to hide.”

At the time of the father’s comments, the friends were considered missing people. But, in a dramatic twist, Canadian police made an “unprecedented appeal to the public” for information about their whereabouts on Tuesday (Canadian time) and warned the public not to approach them.

Mr McLeod and Mr Schmegelsky, from Port Alberni, near Vancouver, are also suspects in the death of a yet-to-be identified middle-aged man whose body was found near the pair’s burning pickup truck in another remote area of northern British Columbia.

They were previously last seen driving a grey 2011 Toyota RAV4 more than 2000 kilometres away from BC in northern Saskatchewan, in central Canada.

Just hours later, the Royal Canadian Mounted Police issued an alert to residents of Manitoba, to the east of Saskatchewan, to say “we have reasons to believe they were recently in the Gillam area” of that province.

PUBLIC SAFETY – Kam McLeod and Bryer Schmegelsky MAY be in Manitoba and are considered dangerous. We have reasons to believe they were recently in the Gillam area. If you spot them – take no actions – do not approach – call 911 or your local police immediately. #rcmpmb pic.twitter.com/yh2yV78oZd

The teenage duo is considered so dangerous the RCMP said it had made the “unprecedented” call to go public with Tuesday’s warning.

“Do not approach, do not take action and call 911 immediately.”

Mr McLeod and Mr Schmegelsky were first loosely connected to the murder of Mr Fowler and Ms Deese on Friday, when their Dodge was found burning on a highway and a man’s body was found several kilometres away.

The shocking tragedy took place near Dease Lake, 470 kilometres from where Mr Fowler and Ms Deese were found shot dead in a ditch on the Alaska Highway near Liard Hot Springs The distance between the two locations initially had the RCMP reluctant to link the bodies.

Mr Fowler, 23, from Sydney and Ms Deese, 24, from North Carolina, met two years ago backpacking in Croatia. They fell in love and were on a road trip when they were murdered.

They were stranded on the highway after their blue 1986 Chevrolet van broke down on the afternoon of July 14. Their bodies were found the next day.

Authorities are yet to identify the body found near the burning Dodge.

Mr McLeod and Mr Schmegelsky are best friends who worked night shifts at a Canadian Walmart together to raise money to fund a working adventure in the Yukon Territory.

The teenagers also liked to play video games that simulated war, and involved hunting and camouflage.

Police now consider the pair are armed and dangerous.

“Given these latest developments, Cameron and Bryer are no longer considered missing,” Sergeant Shoihet said.

“The RCMP are now considering Cam McLeod and Bryer Schmegelsky as suspects in the Dease Lake suspicious death and the double homicide of Lucas Fowler and Chynna Deese.”

Mr Schmegelsky’s family has offered positive descriptions of the teenagers. His grandmother, Carol Starkey, told the Times Colonist newspaper he “was a great kid”.

His father, Alan Schmegelsky, said his son and Mr McLeod were “best friends who did everything together”.

“They were just out on an adventure,” he said.

Earlier, Canadian authorities released a sketch of a man who was seen by a passerby talking to Mr Fowler on a remote highway in northern British Columbia a week ago.

Mr Fowler’s father, a senior NSW Police officer, flew to Canada and made a public plea for information on the young couple’s death.

“It is a love story that’s ended tragically. It really is – it is the worst-ever love story.”

“I may be an experienced police officer but I’m standing here as the father of the murder victim,” Chief inspector Fowler, of Sydney’s north-west Hills district, said.

Teens named as suspects in Canada murders ‘know how to hide’: Manhunt continues