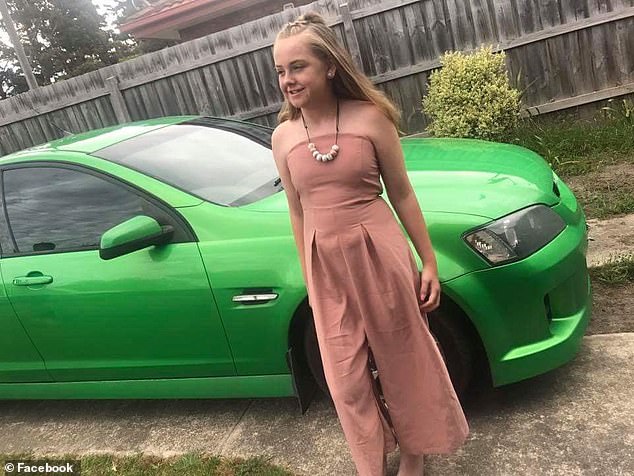 A teenage girl has become the latest casualty in what authorities are calling a ‘horror flu season’ that has already taken the lives of 228 Australians, prompting health authorities to issue urgent advice.

Melbourne schoolgirl Crystal-Lee Wightley had been experiencing flu-like symptoms for three days, when she woke her mother Dymanty Fulham at 5.45am on Friday to tell her she was feeling worse.

Ms Fulham had booked a doctor’s appointment for her daughter later that morning so she sent her back to bed.

Half an hour later she went to check on the 13-year-old and found her unconscious.

She immediately called an ambulance but paramedics could not revive Crystal-Lee and she was pronounced dead.

“Crystal was kind, smart, beautiful and had comebacks that would make a room stop and then laugh,” a Facebook tribute post written by her sister read.

Her grandmother also posted a moving tribute to the young girl they described as “caring”.

“Big Poppy and Big Nanny will be waiting to put their arms around you and keep you safe until we meet again. Missed and loved always I just can’t stop crying beautiful girl,” Karyn Wightley wrote.

More than 228 Australians have died from the flu this season, with a total of 120,000 people hit with the virus.

The number of cases has skyrocketed above previous years.

In June last year, less than 2000 cases were reported – compared to the 42,000 people who caught the virus last month.

While health experts have warned the current flu vaccine may not be as productive in fighting one strand of influenza, it is the best tool they have.

It also means people are less likely to wind up in the intensive care unit if they are treated in hospital.

“There still remains, however, a level of complacency within the community with regard to annual flu vaccination,” she said.

One in four people mistakenly believe they don’t need a flu shot because they don’t think the virus won’t strike them, she said.

Not too late to vaccinate

NSW health director of communicable disease Vicky Sheppeard said it was especially important parents made sure their children were vaccinated.

“With flu cases still on the rise, we’re encouraging everyone, particularly pregnant women and parents of young children, to get their flu shots immediately,” Dr Sheppeard said.

She said in NSW alone 2.37 million doses of government-funded flu vaccines have been distributed across the state.

“There has been strong demand, but there are sufficient supplies of free government-funded vaccines available for eligible people.

“So we are again encouraging parents and carers of children from six months up to five years old to take advantage of the free flu vaccine.”

One of the most important things to do was to stay home if you were experiencing symptoms, Dr Sheppeard said.

“If you are unwell with the flu, stay at home and minimise contact with other people if possible, especially those who are particularly vulnerable, such as young children and the elderly. Avoid visiting aged-care facilities and child care centres until you have recovered,” she said.

On Sunday a flu awareness campaign was launched in South Australia after 20,000 people caught the virus across the state – a staggering number compared to the 1500 cases recorded at the same time last year.

Health Minister Stephen Wade said the campaign was a reminder of how quickly the virus can spread.

“In the face of what has been a horror flu season so far this year, this new campaign does a great job of illustrating just how easily the flu can spread,” he said.

“The flu virus is spread by human contact and can live up to 48 hours on hard, smooth surfaces such as door handles, playground equipment and desktops.”

Flu shots are free under the National Immunisation Program for pregnant women, people over 65 years of age, Aboriginal people and those with medical conditions such as asthma, diabetes and heart problems.

Disease concern for survivors of Afghanistan earthquake
Steve Smith confirmed as starter for first Test against Sri Lanka
Matildas will be keen to forget 7-0 drubbing by Spain
Upcoming stats will reveal where and how hard rates are hitting economy
Victorian MPs pocket a tidy 2.75 per cent pay raise
Reserve Bank review isn’t a ‘get the governor’ exercise: Jim Chalmers
Teen suicide: Desperate mums plead for help, ‘We can’t save our children alone’
Today's Stories