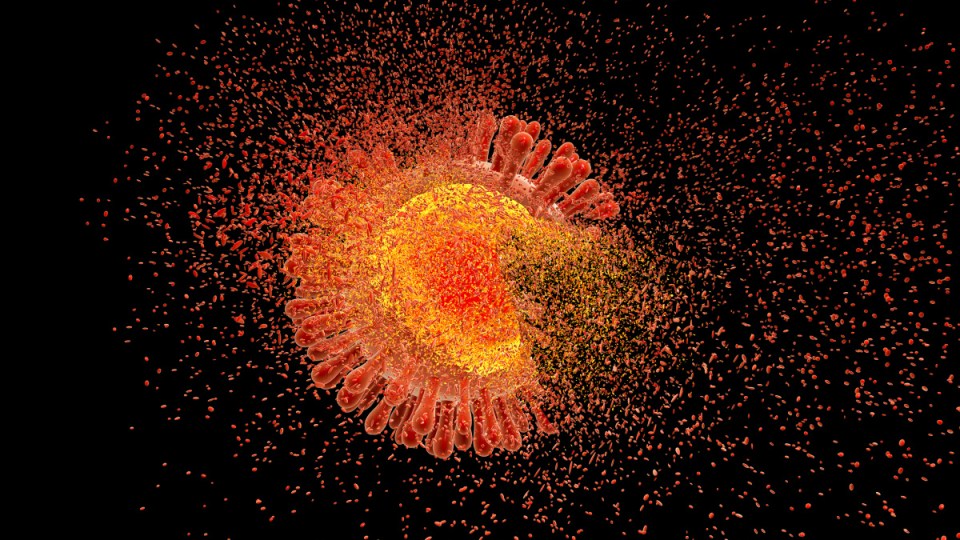 Computer-generated image of the HIV virus being destroyed. Finally, scientists have done it for real. Photo: Getty

In a world first, researchers have eliminated HIV-1 DNA – the virus responsible for AIDS – from the cells and organs of living animals. Human trials could begin within a year.

In the US study, mice were cured of HIV by using a combination slow-acting retroviral drugs to suppress the virus, and a novel gene editing and gene therapy delivery system gene sequence that hunts the virus down – and removes it from the DNA in cells. It does so without collateral damage, notably poisoning.

HIV has an uncanny ability to disguise itself as a healthy member of the host genome – and the success of this detective-like (seek and destroy) gene therapy establishes a potential roadmap to fully cure the HIV infection in humans.

Non-human primates will be tested next

“Our study shows that treatment to suppress HIV replication and gene editing therapy, when given sequentially, can eliminate HIV from cells and organs of infected animals,” said Professor Kamel Khalili, Chair of the Department of Neuroscience, Director of the Center for Neurovirology, and Director of the Comprehensive NeuroAIDS Center at the Lewis Katz School of Medicine at Temple University.

“We now have a clear path to move ahead to trials in non-human primates and possibly clinical trials in human patients within the year.”

HIV is no longer an automatic death sentence – as it was 30 years ago – but it continues to run rampant throughout he world. According to UNAIDS, more than 36.7 million people worldwide are infected with the human immunodeficiency virus type one (HIV-1) – and more than 5000 individuals worldwide are newly infected each day.

What saved the day were antiretroviral drugs that restrict infection by stalling various steps of the viral life cycle. However, drug therapy – which has significant side effects – fails to eliminate the virus from the body.

Not only deadly, but a sneaky master of disguise

HIV is a sneaky bug that appears to disappear by integrating its DNA sequence into the genomes of cells of the immune system, where it lies dormant and beyond the reach of antiretroviral drugs.

This means if retroviral therapy is abandoned, the virus reactivates and the disease will eventually progress to full-blown acquired immunodeficiency syndrome (AIDS).

In previous work, according to a statement from the researchers, Dr Khalili’s team used CRISPR-Cas9 technology to build their gene therapy detective. They found it effectively removed large fragments of HIV DNA from the infected cells of rats and mice, significantly impacting viral gene expression.

But they found this seek and destroy gene therapy didn’t completely remove the virus. Another tool was required.

Virus is suppressed while gene detective goes in search

For the new study, Dr. Khalili, in collaboration with scientists from the University of Nebraska Medical Center, combined their gene detective system with recently developed long-acting slow-effective release retroviral medication.

The modified drug was packaged into nanocrystals, which readily distribute to tissues where HIV is likely to be lying dormant. From there, the nanocrystals, stored within cells for weeks, slowly release the drug. The point was to keep the virus suppressed – but not to the point where it could evade the gene therapy.

To test this idea, the researchers engineered mice to produce human T cells susceptible to HIV infection. Once infection was established, mice were treated with the slow release medication and subsequently with CRISPR-Cas9. At the end of the treatment period, mice were examined for viral load. Analyses revealed complete elimination of HIV DNA in about one-third of HIV-infected mice.

Why not all of them? Presumably, the marriage of drug and gene therapy needs to be tweaked for each patient.

It’s worth noting, that only two humans infected with HIV have had the virus eliminated from their bodies.