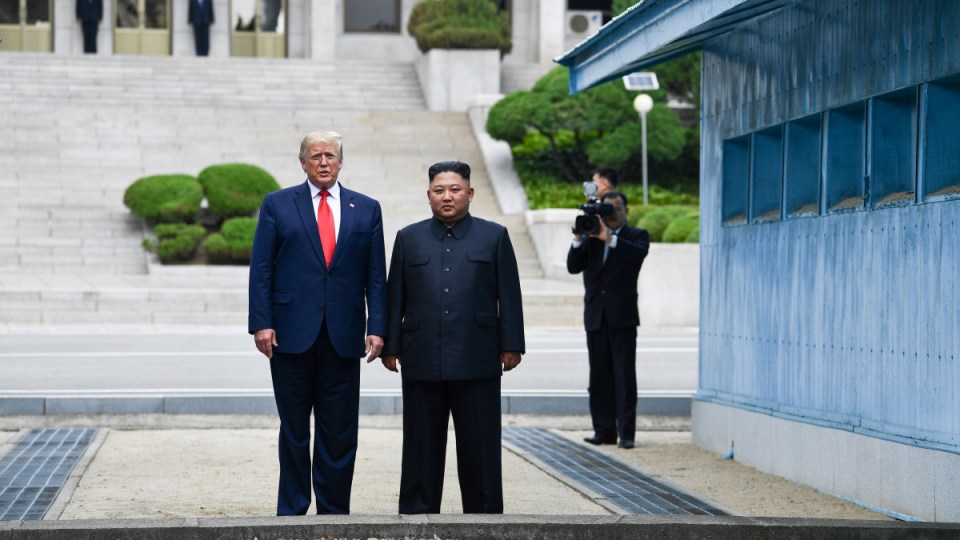 US President Donald Trump and Kim Jong-un in the DMZ in 2019. Photo: Getty

Donald Trump has become the first sitting US president to step into North Korea as he met the north’s leader, Kim Jong-un, in the Korean demilitarised zone (DMZ).

The meeting marked the first time the leaders of the US and North Korea have met on the front line of the Korean peninsula conflict.

They shook hands over the border before Mr Kim invited Mr Trump to step across, echoing his invitation to South Korea’s President Moon Jae-in during their historic meeting in April 2018.

The duo walked a little way into the north, shook hands again in front of North Korean press, and walked back into the south for their sit-down discussion.

It was Mr Trump and Mr Kim’s third meeting and came after Mr Trump and Chinese leader Xi agreed on a temporary truce on their trade war.

Mr Trump and Mr Kim have previously committed to the “complete denuclearisation” of the Korean peninsula, but their second meeting earlier this year ended in no deal.

The meeting comes after Mr Trump declared his desire to meet Mr Kim at the border “just to shake his hand and say Hello!” on Saturday.

The South Korean president, who announced that Mr Kim accepted Mr Trump’s invitation, praised the two leaders for “being so brave” to hold the meeting on the side of the G20 summit in Osaka, Japan.

“I hope President Trump will go down in history as the president who achieves peace on Korean Peninsula,” Mr Moon said.

Mr Trump said he looked forward to meeting Mr Kim, but sought to dampen expectations, predicting it would be “very short”.

“Virtually a handshake, but that’s OK. A handshake means a lot,” he said.

Presidential visits to the DMZ are traditionally carefully guarded secrets for security reasons.

‘The flower of peace is truly blossoming’

Before the meeting, Mr Trump said at a news conference in Japan he would “feel very comfortable” crossing the border into North Korea if Mr Kim showed up, saying he would “have no problem” becoming the first sitting US president to do so.

It was not immediately clear what the agenda, if any, would be for the potential third Trump-Kim meeting.

North Korea’s first Vice Foreign Minister, Choe Son-hui, said the meeting would serve as “another meaningful occasion in further deepening the personal relations between the two leaders and advancing the bilateral relations”.

Meeting Mr Trump at South Korea’s presidential Blue House on Sunday before the pair flew to the DMZ, Mr Moon said when he saw Mr Trump’s invitation to Mr Kim, “I could really feel that the flower of peace was truly blossoming on the Korean Peninsula”.

Mr Moon added that the meeting would be a “significant milestone in the peace process”.

Mr Trump’s summit with Mr Kim in Vietnam earlier this year collapsed without an agreement for denuclearising the Korean Peninsula.

He became the first sitting US president to meet the leader of the isolated nation last year, when they signed an agreement in Singapore to bring the North toward denuclearisation.

Substantive talks between the nations have largely broken down since then.

The North has baulked at Mr Trump’s insistence that it give up its weapons before it sees relief from crushing international sanctions.

Still, Mr Trump has sought to praise Mr Kim – in hopes of keeping the prospects of a deal alive – and the two have traded letters in recent weeks.

Every US president since Ronald Reagan has visited the 1953 armistice line, except for George HW Bush, who visited when he was vice-president.