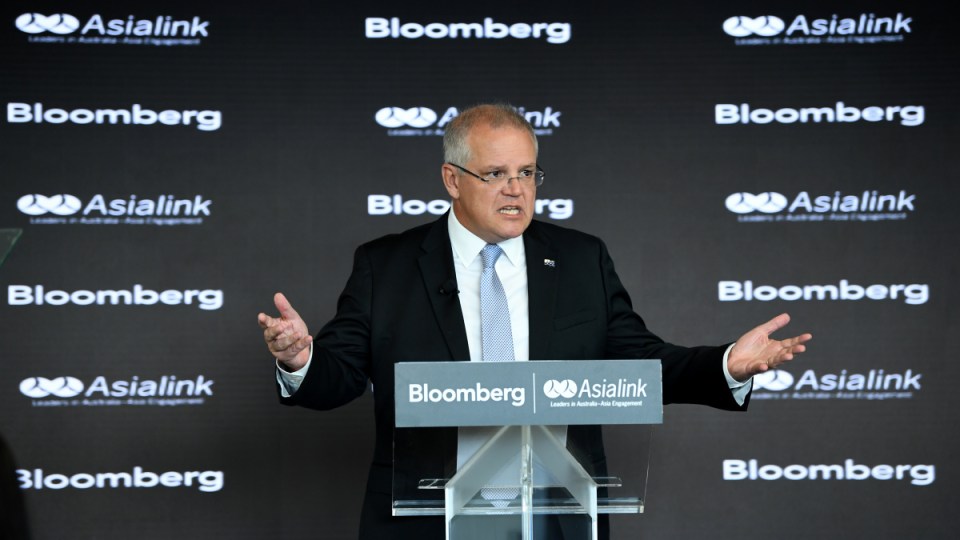 Scott Morrison used his first foreign policy speech to try and calm escalating tensions between China and the US. Photo: Getty

Prime Minister Scott Morrison has used his first foreign policy speech to call for calm between China and the US.

Now his real challenge lies ahead: Talking Donald Trump out of a trade war that could devastate the Australian economy.

But don’t expect Mr Morrison to make a show of calling out the US president.

Speaking in Sydney on Wednesday before his trip to Japan for the G20 summit, the PM vowed he would not stand by “passively” as two global powers slugged it out, calling on China and the US to act in the interests of the whole region.

Mr Morrison said Australia was a “staunch and active ally of the United States”, but he also acknowledged the nation has a ‘‘comprehensive strategic partnership and free trade agreement with the People’s Republic of China’’.

“If we can mellow Trump out a bit it will help. Point out the consequences to Australia of an escalating trade war,” he said.

“The US is a close ally, but what they are doing can really harm Australia.”

The trade war has already sparked fears of a global economic downturn that could affect economic growth and jobs in Australia.

Trade between Australia and China increased more than $200 billion last year and heavily weighed in Australia’s favour – a fact that will not be lost on Mr Morrison, associate professor Yuan said.

He said Mr Morrison was far more likely to pressure the President discreetly, rather than call him out publicly, because of Mr Trump’s unpredictable nature.

“I think in private conversations he can try politely to convey the message, but I doubt he would be making such a public statement,” he said.

“I think because of Trump’s ego and the way he operates, it’s difficult to be publicly critical. The best way I can think of is to have a private and polite conversation, but get the message through that you’re hurting us as well.”

As the world’s two biggest economies go head to head, countries across the region are being pushed and pulled by traditional allegiances and commercial priorities.

Australia is increasingly in the middle of the economic slowdown.

Monash University’s international trade relation expert Giovanni Di Lieto said: “We trade with China but we are safe under the US security umbrella – we’re stuck between a rock and a hard place.”

During his speech, Mr Morrison said it was time for China to act responsibly, a point Dr Di Lieto said was fair.

“China is having its cake and eating it too. Because it can still cut corners and have exceptions as a developing economy but with the might of a fully developed economy,” Dr Di Lieto said.

One positive development is that China’s President Xi Jinping and Mr Trump have said they will hold an extended meeting on the sidelines of the summit, raising hopes they will agree to a truce.

The two presidents set a precedent after last year’s G20 in Buenos Aires, with a meeting that ended in a temporary truce.

The whole region will be watching the fallout of those talks, Dr Di Lieto said, adding the Australia government was desperate to see a swift end to the economic conflict.

“We are desperate to not make a choice. We need both the US and China. It would be negative if we were placed in a position where we had to choose either,” Dr Di Lieto said.

International economics expert from the University of Melbourne, Andrew Walter, said despite the leaders agreeing to meet, the situation had “the potential to get a lot worse”.

“There’s a growing sense of division between them,” Professor Walter said.

“Particularly on technology-related trade and investment, where third countries may be increasingly asked to choose sides. We’ve chosen the (US’s) side on Huawei, where countries like Britain are wavering,” he said.

“The most important effect of the trade war escalating would be growth falling in both countries. It’s going to scare business and stock markets.”