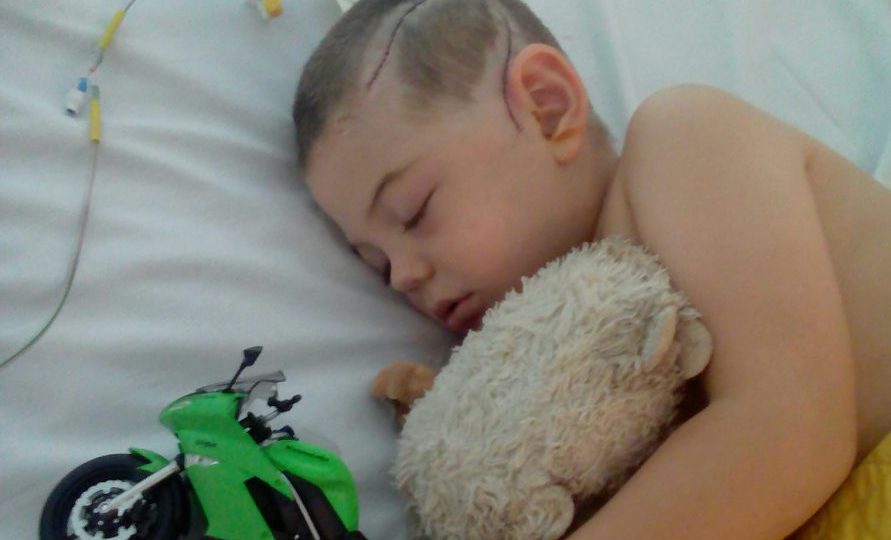 One dad determined to demonstrate the injustice has set up a donation page for his young son.

As GoFundMe flew a rainbow flag in the face of Israel Folau’s campaign to defend his anti-gay comments, suffering families have questioned why donors gave to a man paid more than $5 million a year.

One dad determined to demonstrate the injustice has set up a donation page for his young son who lives with a half-functioning brain.

In stark contrast to the enormous amount of cash donated to embattled ex-Wallaby Folau, the boy’s fundraiser has attracted just $30 in three days.

“The last resort for us is to ask for any money,” Gold Coast dad Bryce Wilton said.

“For Folau, it was the first resort. Which is why, tongue in cheek, I asked for the same amount of money.

From the displaced Mascot Towers residents asking people to help with their repairs, to a young father who lost all his limbs, the GoFundMe pages are filled with worthy causes.

The outrage over the rugby star’s decision to go begging has also left donors wondering what checks are in place to determine whether the recipient is a genuinely worthy cause.

Critics of GoFundMe’s decision to pull the Folau post and refund the $760,000, meanwhile, have slammed the website for choosing which causes it would take a moral stance against.

Past fundraisers have included a man who wanted someone to pay for his cigarettes and a sack of wine, while a young woman on the page on Monday wanted help to get cash for her holiday to America.

Mr Wilton said donations should go to people who need it, and he was “disgusted and disappointed” by the “audacious” amount of money Folau was asking for ($3 million).

He decided to ask for the same amount to help Mikey – as an experiment and to prove a point.

Mikey ‘Danger’ Wilton has a rare condition – Hemiconvulsion-hemiplegia-epilepsy. He’s lost half of his vision, the function of the right side of his body, and he suffers from severe seizures.

Last week his family found out that – for the fourth time in his seven years – the little boy would need to undergo risky surgery to save his life.

“If he doesn’t have this surgery, he will die young,” Mr Wilton told The New Daily.

“His cognitive abilities will be deflated and his quality of life will be much worse and it could kill him.

“But the surgery could cause further damage. He could lose his speech, and that’s a thing we need to deal with.

“The alternative is not to do the surgery and he might die earlier.”

Mr Wilton said that before their three children were born, his wife and he had several investment properties and drove nice cars.

They have sold everything to keep their Mikey alive.

Paying for their son’s treatment doesn’t come cheap – and they have, reluctantly, had to rely on the generosity of friends and family.

“I’m sure when he [Folau] was in the Wallabies he went to see sick people, and I wonder what he thought,” Mr Wilton said.

“To see what he did, it was nothing but a slap in the face to all the parents and all the people who do whatever they can for their kids.”

Mr Wilton is not alone. The GoFundMe site is filled with Australians who need a hand getting through tough times.

The dad who lost his limbs

On Christmas Day, Mick O’Dowd was a fit and healthy father of two, making lunch for his little family and helping build his children’s toys.

By the middle of January, the 45-year-old had all four of his limbs amputated after contracting a rare flesh-eating bacteria that seeped into his bloodstream.

Mr O’Dowd is still in intensive care, but his family is hoping he will soon be off the ventilator and back at home.

They’re asking for $300,000 to help buy prosthetic limbs so he can return to work and continue to be ‘the involved father he has always been’ to his children.

The young woman who needs a seeing eye dog

In 2017 Gemma Wilson, 26, was diagnosed with a rare eye condition called Retinitis Pigmentosa.

“Gemma is no longer able to drive, which has been the hardest thing for her as she used to be so independent and feels she’s lost all of her confidence to go out and about on her own,’ writes her brother Luke, who set up the GoFundMe.

Luke is asking people to donate $40,000 so Ms Wilson can buy an assistance dog, training it herself so she can get back some of her independence.

Sleeping pods for the homeless in Tasmania

Kristen Ritchie is a volunteer with big plans. The Launceston local wants to raise $60,000 to buy 40 sleeping pods to shelter the homeless during the chilly winter months.

“Ten pods are going to be for free, the other 30, we’ll be charging an affordable rate. The fee will include food and power and will be $25 a night,” she tells The New Daily.

She says current temporary shelters in Launceston are overrun, forcing people to sleep on the streets.

“Today we hit minus four. I go to my car in the morning, it’s laden with ice. How are these people sleeping on the streets alive today?”

Charlie is a young boy currently undergoing his fourth round of chemotherapy at Randwick Hospital. He has 14 rounds to go.

“He loves fishing and before he was diagnosed, he was madly saving to buy himself a second-hand dinghy and trailer,” the GoFundMe reads.

“When he feels up to it – he scans Gumtree and eBay looking at what he could possibly buy once his treatment is over – which provides a great distraction.”

His friends are asking for $15,000 to help him achieve his dream.

Israel Folau fundraising controversy: Suffering families could do with the cash