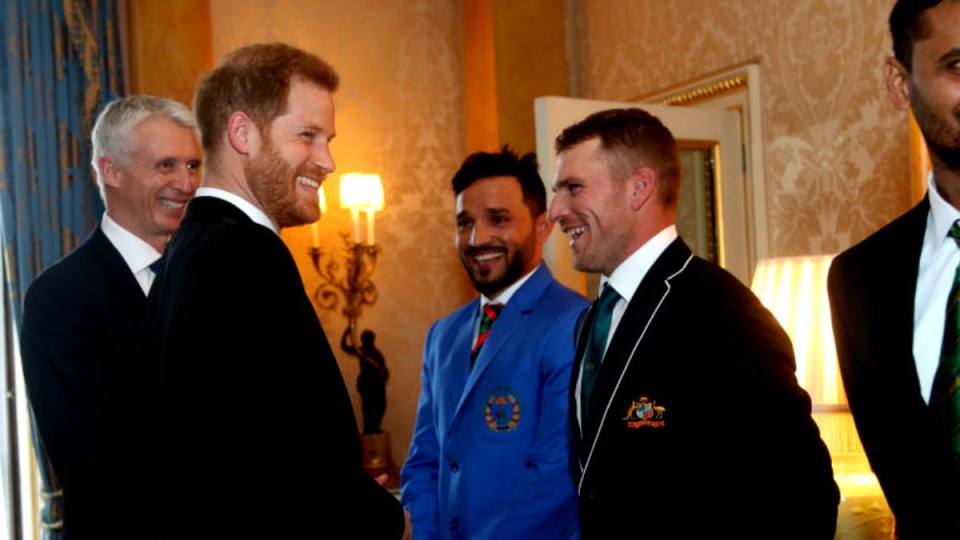 Prince Harry and has a gentle dig at the Australian cricket captain Aaron Finch. Photo: Getty

Prince Harry could not resist stoking the rivalry between England and Australia ahead of the Cricket World Cup when the team captains met at Buckingham Palace.

The Duke of Sussex jokingly needled Australian captain Aaron Finch: “You’re getting on a bit now, aren’t you? How long have you been playing?” – making the batsman laugh.

The Queen also met the group of world-class bowlers, batters and all-rounders who joined a palace garden party on Wednesday, ahead of the launch of the much-anticipated event being staged by England.

Prince Harry will be at The Oval on Thursday to watch England captain Eoin Morgan take on South Africa in one of the World Cup’s opening matches.

The home side are ranked as world No.1 after four solid years on an upward trajectory.

When the Queen met West Indies captain Jason Holder she was dwarfed by the all-rounder who stands 202cm tall, but joked she had someone taller in her household.

Harry tested the mood of the players, asking them if they were confident and who was the favourite.

He told the Sri Lankan captain Dimuth Karunaratne: “Enjoy it, if you’re not going to enjoy it you might as well not be here”.

Outside, garden party guests braved wet and cold conditions that had been predicted, but they still seemed to enjoy the occasion.

Among the royal guests at the garden party were Princesses Beatrice and Eugenie and Prince and Princess Michael of Kent.